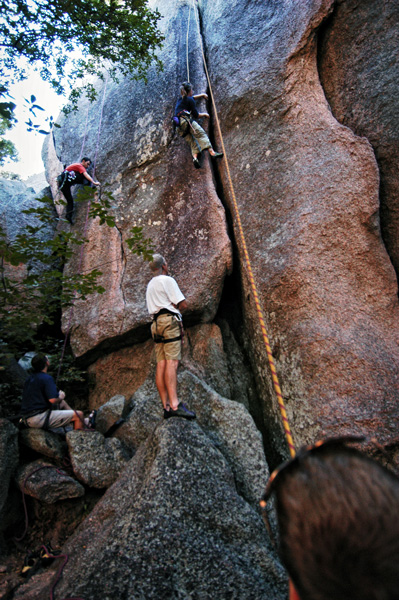 The Triple Cracks alcove at Enchanted Rock State Natural Area near Fredericksburg, Texas, is an open space not much bigger than a good-sized living room. Shaded by huge oaks, with a natural granite bench and housing three moderate, tall, clean cracks, the alcove can be a popular site for climbers to congregate. On April 16 around 30 people, including nine from Austin and Houston, 15 Boy Scouts guided by a local guide service, and another small group of guided clients were all climbing there.

Late in the day a climber from Austin (who has requested anonymity) tied in for a final toprope lap on Grass Crack (5.10a). He was to be the last on the climb so his belayer requested that he clean the anchor. When the climber reached the anchors, he clipped into the chains and yelled, “Off belay.”

The belayer verbally confirmed and disconnected the belay. The climber cleaned the anchor and rigged for lowering. He yelled, “Take!” but received no response. He yelled, “Take!” again. He heard no confirmation, but thought he felt the rope tighten. He assumed that he was back on belay and unclipped from the anchor. He yelled, “Lower me!” and leaned back.

He fell 70 feet, careening off two boulders and a tree to land on his back in a little flat place among big rocks and uneven ground. He wasn’t wearing a helmet.

As the aghast belayer moved forward to start CPR, the climber gasped abruptly and began breathing and moaning.

One of the guides and a first-year medical student assessed the climber as another guide ran to higher ground looking for cell-phone reception, then dialed the Enchanted Rock ranger station and requested a rescue. EMTs arrived on foot 20 minutes later. A helicopter showed up soon after and transported the climber to a hospital in Austin.

The climber broke six ribs and suffered multiple contusions, but was otherwise intact. He is expected to make a full recovery.

Lowering accidents are common and often fatal. The root of the problem is almost always faulty communication. Grass Crack is slabby at the top and the belayer and climber couldn’t see each other. The area was crowded. Reportedly, the Boy Scouts were rambunctious and loud, and the noise hampered communication. Most important, the climber should never have gone off belay if he intended to be lowered.

This accident could have been prevented if the belayer or climber had been scrupulous in following an important rule in forming a rope team: Always discuss the lower/rappel/belay plan before leaving the ground. Trouble-shoot the scenario and come up with solutions. Can you see each other/hear each other? If not, the climber might want to rappel instead of lower. On multi-pitch climbs, you might need to communicate with rope tugs.

Even if you think you’ve clearly communicated with your belayer, you can still prevent oversight accidents by testing the set up. Clip the anchor with two shoulder-length slings. If you’re lowering, ask for tension and let your belayer take your weight on the rope. The slings should be slack. Bounce once or twice on the rope. Only after confirming that the rope is holding should you unclip your slings. You can do the same thing when rappelling. Just pull rope through your device until it is supporting your weight. Bounce test, then unclip.

To summarize: Prevent lowering/rappelling accidents by clearly communicating your intentions before leaving the ground. Since miscommunication can occur despite your best efforts, take responsibility for your own safety and always test the system before unclipping your back ups.