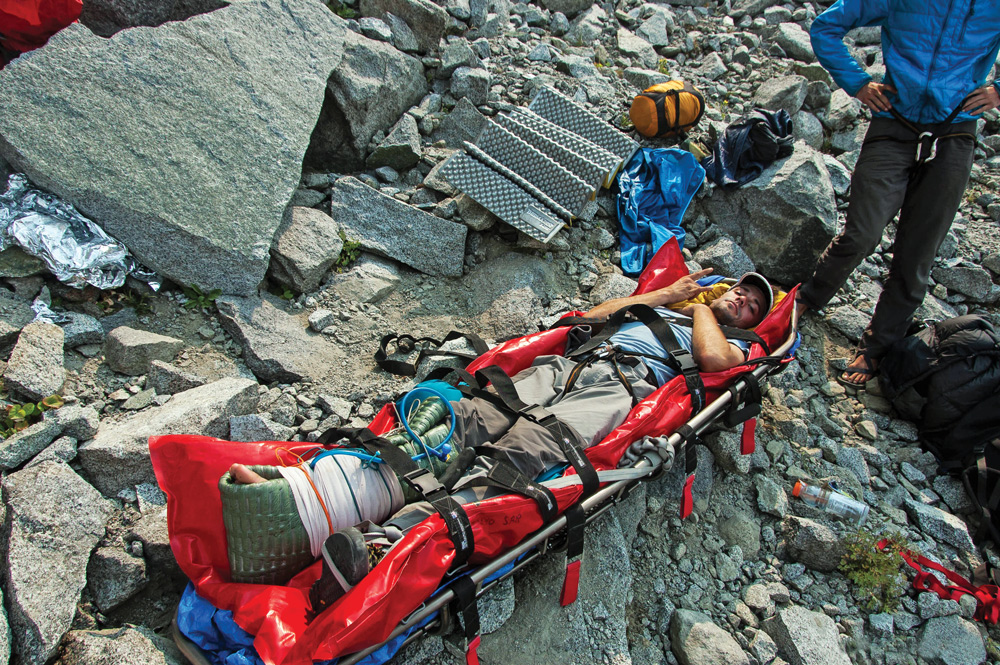 Just after 3 p.m. on September 1, Eric Hengesbaugh, 27, was climbing broken terrain on the fourth pitch of the East
Face (II 5.7) of the Surgicle, a tooth-like feature on Temple Crag in the Palisades of California. In an unpublished write-up, Hengesbaugh described
what happened: “I moved my hands to a large block. As I leaned back, the rock shifted so I let go, falling approximately 35 feet and impacting a ledge.”
His right ankle, he wrote, was turned “grotesquely outward” and he felt terrible pain in his lower back.

Hengesbaugh’s partner, Peter Chagnon, 22, was able to climb over and help Hengesbaugh back to the belay. Given the pain near Hengesbaugh’s spine, the two
decided to sit tight and wait for a rescue. They yelled for help, hoping to alert Hengesbaugh’s twin brother, Brian, and another friend, Gabe Kiritz,
also 27, who were climbing nearby on the North Rib (II 5.8).

In the meantime, Eric and Chagnon changed their minds and began rappelling the lower pitches, but were quickly stymied by a stuck rope. Around
7 p.m. the two parties finally joined forces, tied their remaining ropes together and rapped to the ground. Chagnon and Kiritz stayed with Eric
as Brian hiked out to round up the rescue. The next morning at 11 a.m. five members of Inyo Search and Rescue helicoptered in. It took six
hours to carry Eric from the base of the climb to the helicopter, where he was flown to a hospital in Bishop. Almost 30 hours after his fall he
was treated for a severely broken right ankle and a burst L2 vertebra.

Temple Crag tops out at 13,000 feet. Mountain routes are subject to frequent freeze/thaw cycles and almost always feature sections
of fractured rock. Even classic Temple routes, like Moon Goddess Arete (III 5.7), are notorious for choss. More obscure routes like the East Face
are even looser and more prone to the dangers of rockfall, holds that break and stuck ropes.

Everybody occasionally pulls off a loose hold, and accidents sometimes result despite your best efforts to climb safely. Here are
a few rules to follow whenever you venture into loose terrain.

1. Situate your belay out of the fall line.

2. Inspect your holds, and test them.

4. Spread your weight between holds.

Finally, plan for the worst-case scenario. What will you do if someone is severely injured on the climb? Where is the nearest phone
reception? The closest ranger station? Hospital? Does it make sense to pack radios? At the very least, tell a trusted friend what route you’re
doing and a firm time you’ll be back. If he doesn’t hear from you by that time, he should initiate a rescue.

Hengesbaugh’s ordeal might have been shortened through better communication up front and if someone had gone for help immediately.

This article was published in Rock and Ice issue 232