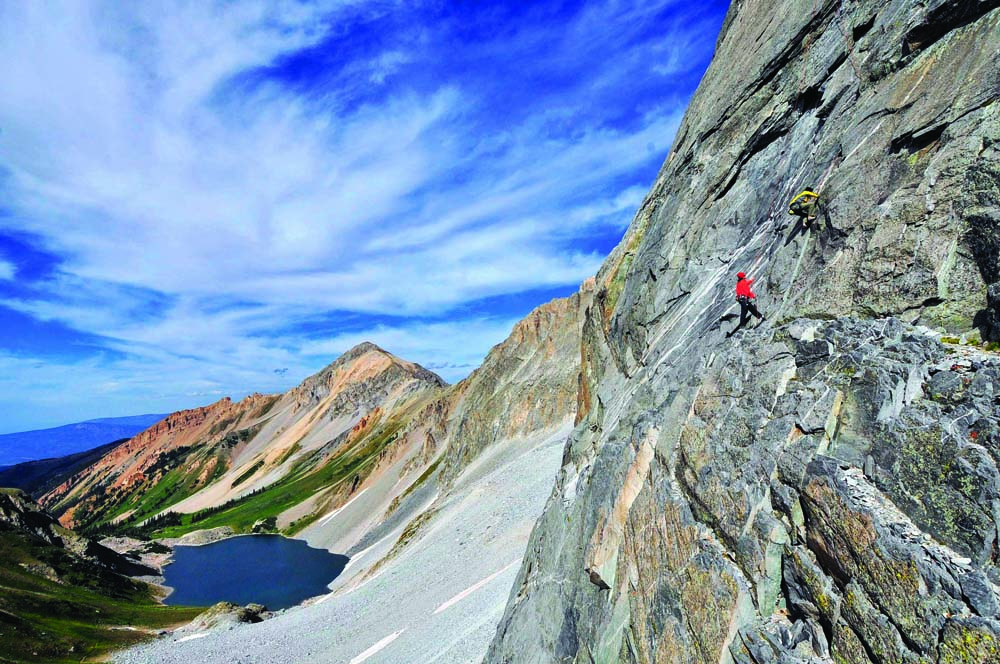 Capitol Peak (14,137 feet) in the Elk Mountains near Aspen, Colorado, is a tottering Jenga pile of frost-heaved rock considered by many to be the state’s most difficult 14er. Capitol’s notoriety is primarily derived from the Knife Edge, a 150-foot verge of polished granite that any summiteer on the Northeast Ridge must negotiate. It’s not hard. Not even fifth class. Some people rope up. Some straddle the sharp ridge. Some grab the top and traverse. Some simply walk the edge like a tightrope. However you do it, the exposure is extreme—thousands of feet—and can be quite intimidating.

On June 19, Ryan Joseph Palmer, 35, and two companions were returning from the summit of Capitol. According to various reports, Palmer didn’t want to climb back across the Knife Edge and elected to forge down the north face. The low-angled terrain on the north face quickly steepened and at some point Palmer fell an estimated 300 feet. He died of blunt head trauma.

Stay on route. The path on any popular 14er should be discernible with a little sleuthing. Look for boot black and hand shine on the rocks. Trails often follow natural contours. When scouting a trail, look for sudden drops that could indicate cliffs. Don’t proceed until you’re sure you’re on the right path.

Sometimes on popular routes there are well-trampled false “shortcuts” that can wander for a distance only to cliff-out, steepen and/or become loose and untraveled. The descent on the Northeast Ridge is particularly tricky since it requires climbers to descend the south face to a point well below the saddle. You must then re-ascend and drop onto the north face to reach camp. About midway on the descent several paths contour off toward the saddle, tempting leg-weary climbers with a promise of no more uphill, but all of these routes eventually turn into loose, dangerous fifth class scrambles on which climbers have died. If you discover you are off route, backtrack.

Research your climbs. Note hazards and plan ahead for them. You might, for example, bring a 30-meter rope for the Knife Edge and belay, but the rock is so broken you’d be hard pressed to find decent anchors. Alternatively, you could rope up with a 10-meter cord and cross with a partner aiming to move to the opposite side of the ridge to provide a counterweight in the unlikely event of a fall.

Like so many mountain peaks, Colorado’s 14ers are broken up and loose, often nightmarishly unstable. Over time, trade routes such as this one get packed in and become safer, but the routes are still dangerous. At least eight climbers have died on Capitol. In 1992, Robert Palmer (no relation) fell 1,000 feet when he slipped off the Knife Edge. In 2009, the U.S. Paralympic swim-team coach James Flowers died after falling on the traverse around “K2,” another feature on the Northeast Ridge route.

Reportedly, only two people have died after falling off the Knife Edge. Nevertheless, it’s an anomalous pitch. The exposure can add a level of instinctual aversion: fear of falling. If that “fight or flight” reaction kicks in with its attendant adrenaline release and jitters, soloing becomes dangerous, sometimes even fatal.