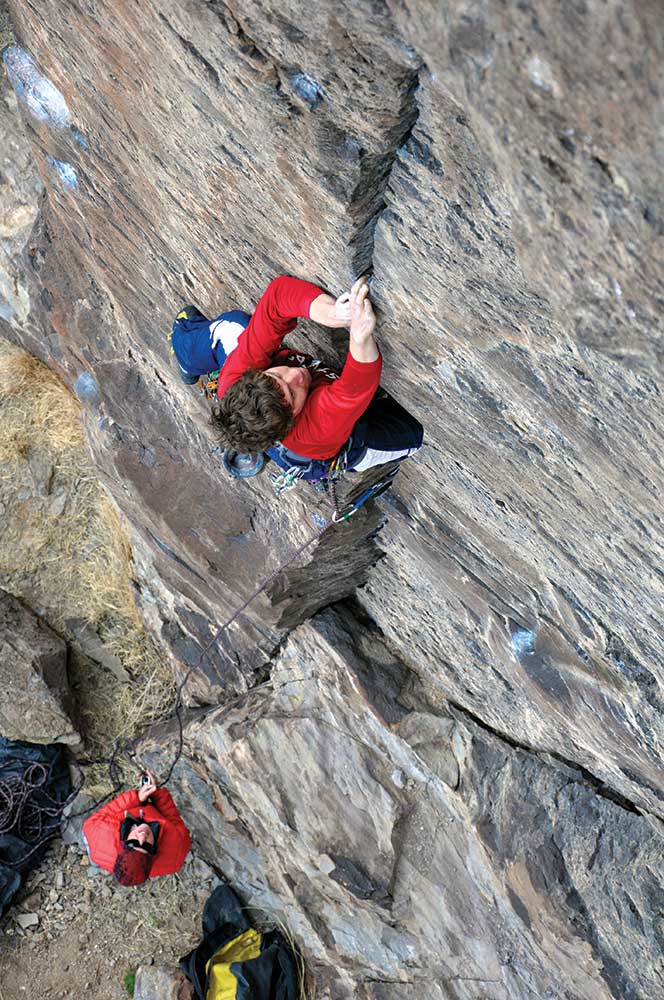 His feet clipped a small ledge on the way down and Adams landed flat on his back. He stood up immediately but couldn’t breathe. According to Adams, Wilks screamed at him to lie down. After a moment, he complied and she ran off to get help. Some of Adams’ friends were climbing nearby and they called 911.

Adams broke five vertebrae, T3 through T7. As of May 29, Adams was “sorta climbing” again, but his confidence has been badly shaken. He said he was having trouble trusting gear. “I just start freaking out,” he said.

Perfectly placed cams made by reputable gear manufacturers don’t fail when plugged into solid rock. However, a number of factors can compromise placements—even those that start out as bombproof. In this case, Adams reported that he didn’t use slings, but clipped his rope to carabiners on the stems of the cams. He also confirmed that Manic Crack has a bulge down low that causes the belayer to stand back from the base, creating an angle in the rope as it tracks through the first piece. Finally, with only 30 feet of rope in the system, the short fall Adams took onto the top piece likely exerted a high force.

As Nick Rueff, the director of quality assurance at Black Diamond, explained in an e-mail to Adams, “Depending on how you had spaced each placement and how much rope your belayer had out, with an aggressive take you could easily have seen a fall factor of greater than 1.” (In tests conducted by Rock and Ice, a .5 fall factor generated 1,700 pounds of force. A fall factor of 1 would be roughly double that.)

This accident occurred because of a combination of factors. First, the top piece was probably less than ideal, possibly because it shifted when Adams had Wilks take. The high force exerted by the short fall with little rope out caused it to fail. Because of the position of the belayer, the other gear also probably shifted, then pulled. This explanation is consistent with the damage seen on the cam lobes and trigger wires, according to Rueff.

Cams are designed to be loaded in line with the stem. Therefore, use slings to help ensure that they don’t shift as you climb past, or when you fall. Sometimes, your belayer will be forced to stand away from the base of a climb. In these instances, place a low directional piece designed to take an outward/upward pull. This low piece should keep the rope in line so that the upper pieces will only receive a downward load in the case of a fall. Finally, beware of short, hard falls. Sometimes, it’s safer to take the plunge rather than have your belayer reel in slack and compound forces.