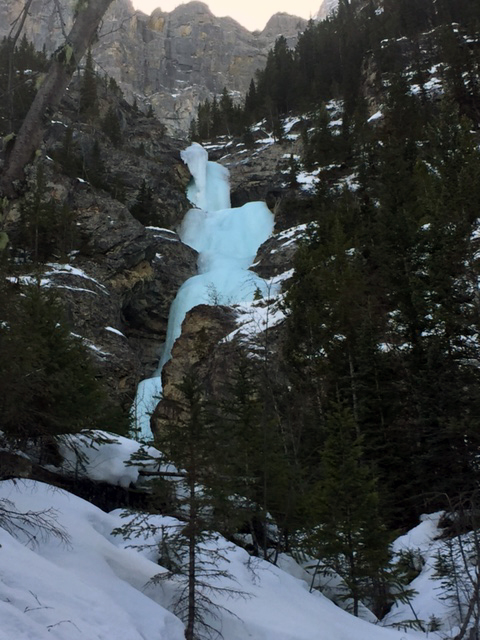 Calgary Herald.
“He hit a ledge and continued to slide, so it wasn’t a clean fall—he bounced off a lot of stuff and slid through rocks.”

The man careened nearly 100 feet down Professor Falls before his belayer caught the fall. The belayer lowered him to a small ledge and another
climbing party assisted them as they waited for helicopter rescue.

The climber sustained severe injuries in the fall, including a broken ankle, pelvis and back, and laceration to his arm, the Calgary Herald reports. He
was stabilized and pulled off the ice ledge by the Parks Canada visitor safety team and flown to an ambulance. He was admitted to the hospital in critical
condition, but has since stabilized.

Professor Falls, an area classic for the grade, consists of multiple sections of steep ice broken by ledges and short snow slopes. The man who
fell, a Canmore local, was probably climbing below his limit and on familiar terrain.

Nick Yardley, an ice climber from Vermont who had climbed the route with his daughter Emma only days before, told Rock and Ice that he believes
that the Canmore man fell on the fourth pitch of the climb, based on a photo published in the Calgary Herald.

“He must have kept sliding over the next steep pitch,” Yardley says. “[There was] no snow on the ledges so it’s easy to see how a person could keep sliding.”

Yardley mentioned that the climb was fat and in great condition, however, it had also been unseasonably warm.

“The pitch he fell on was very wet,” Yardley says. “On the right, running surface water and fresh slushy surface ice [made it] hard to place gear or to
get bomber secure placements.” The left side was drier but mushroomed, he explained, “so … perhaps not straight forward.”

When the man fell, he hadn’t placed protection for a long distance, likely because the ice wouldn’t provide solid screw placements, or because the man
was comfortable on the terrain. He was runout, and without snow on the ledges, there was little to slow his fall.

Ice protection can be bomber, but it is only as strong as the ice that it’s placed in (if it’s placed at all). Oftentimes, when the ice is bad—brittle,
hollow, aerated, slushy, etc.—ice climbers don’t bother to waste energy placing screws that will most likely not hold a fall. Instead, they find
it safer to continue climbing to better ice and more reliable protection.

But running it out is also dangerous, especially on melting ice where it’s difficult to get secure pick placements.

“Think of yourself not as a stuntman but a craftsman,” Andy Kirkpatrick, a veteran alpine climber, advised in a Rock and Ice What I Learned article
(issue 232, February 2016). “Place lots of gear and make all routes safe. Don’t do big ego-massaging runouts on easy ground, but also never assume
there’s no pro just because someone else can’t find it.”

On crummy ice, take the time to chop through the surface to better ice below for screw placements. The man’s fall almost certainly would have been shortened
had he cleared away the slushy surface ice to place solid pro.

Still, even good ice pro is not enough to make an ice climb safe if it’s been consistently warm.

Large temperature fluctuations, and sunshine, not only wreak havoc on surface ice—making ice climbs more difficult to climb and to protect—but
also can cause entire formations to become structurally unstable and at risk of collapse or detachment.

The two weeks prior to this accident saw temperatures into the mid-forties Fahrenheit.

If you’re planning on ice climbing, check the forecast as well as recent weather history. If it’s been too warm, put away the ice tools and crampons and
pull out the rock shoes instead. Ice is only ice if it’s frozen.