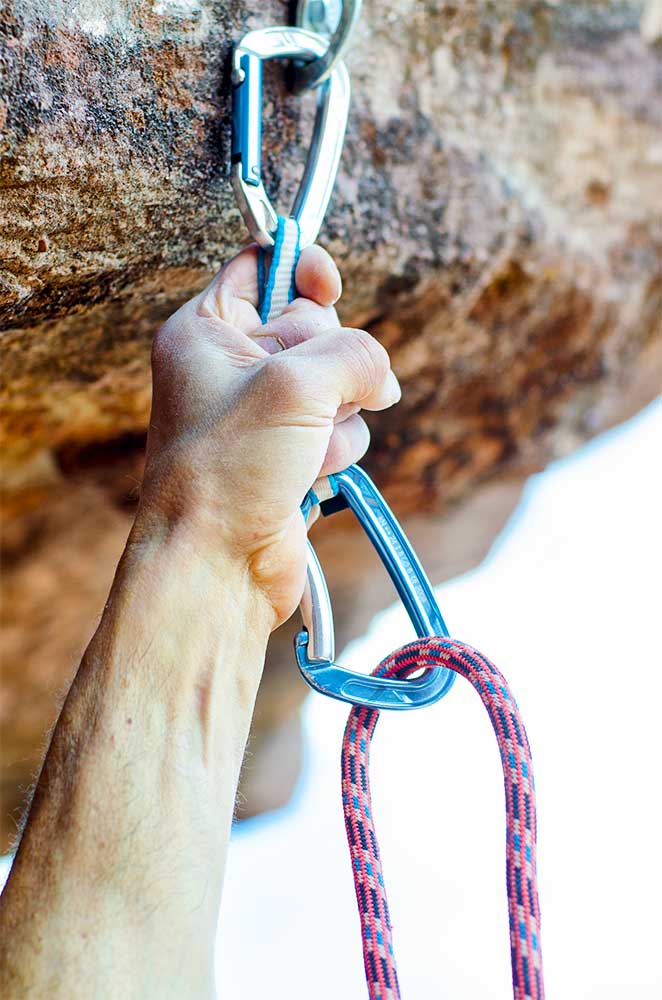 A grisly Instagram photo of
a carabiner stuck in a hand circulated online. Suffice it to say it was an ugly wound and I found myself thinking about it, wondering how that biner
came to be so deeply embedded, and if the owner of that hand was going to be OK. So I did a little digging.

It was November 19, 2011, and Giuseppe “Beppe” Villa, 59, a mountain guide from Courmayeur, Italy, was about 100 feet up a 5.11d at Muzzerone, a limestone
cliff near La Spezia. He was just above the last bolt, climbing through a delicate section when his foot slipped and he fell. The next thing he knew
he was dangling with the nose of the bottom carabiner (on the last clip) deeply buried under his left pinky.

“Maybe I tried to grab the quickdraw,” he wrote in an e-mail.

His belayer quickly took Villa’s weight—the rope was running through the same carabiner—and he was able to secure himself, slip the draw out
of the top biner, and lower with the bottom biner still in his hand. He wrote: “For a big ass like me, my companion did a great job, blocked me immediately
and saved me from tearing my whole hand.”

It turned out that the carabiner had slipped between the skin and the muscle. The doctor cleaned and stitched it, and the injury caused no lasting damage.
Villa was climbing again 15 days later. He’s still guiding in Courmayeur.

At Rock and Ice, I also hear about people being mutilated by grabbing draws. Forearms and hands stabbed; fingers broken, torn, ripped off. In this situation, Villa didn’t remember grabbing the quickdraw but anecdotal evidence suggests that this is what occurred. He probably slipped and grabbed at the center of the draw as he fell past. His hand closed and gripped tight, but the momentum of the fall generated a dynamic force that exceeded his grip. His closed hand was jerked down, opening the carabiner gate, driving the nose of the biner through his skin.

In cases where fingers have been damaged, the rope is almost always involved. To wit: You fall, you grab at a passing draw, the
belayer’s side of the rope loops one of your fingers, and as you accelerate downwards that finger is pulled up and into the biner … You get
the picture.

Don’t grab draws. If the fall is safe and your gear is good, take the fall. Keep in mind that
on really steep climbs it’s often harder to grab a draw and clip than it is to clip from the actual hand- and foot-holds.

There are, of course, instances where you might want/need to grab a draw. For example, if you’ve climbed into ground/ledge-fall range and are fatiguing, or when you’re working a project and need to get through a crux section.

Here are a few tips for grabbing quickdraws:

1. Never grab a draw if you are out of control or falling.

2. Before you grab, make sure you have footholds.

3. Aim for the center and grab between the carabiners.

4. If you’re working a route, rig a daisy to your harness so you can quickly clip in, then take out slack and clip your rope.