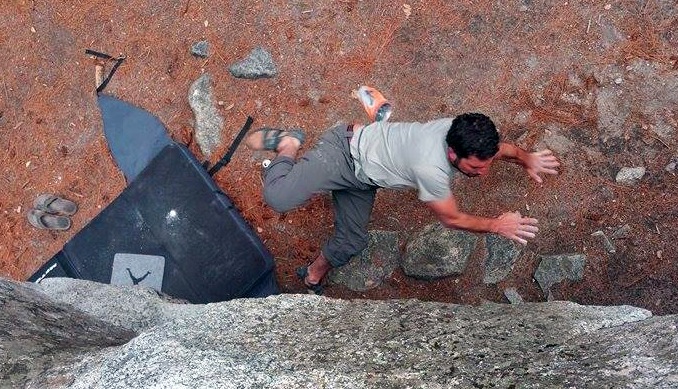 On the afternoon of March 24, longtime
Yosemite Valley resident, Jacob Hawley, 36, and a friend stopped by the Sentinel Boulders to huck laps on one of Hawley’s favorite problems, the Door Knocker Traverse (V3).
Hawley had climbed the problem many times and was not concerned that his buddy seemed distracted by an attractive woman climbing nearby. The traverse
is only six feet high, after all.

Hawley set out on the traverse, grabbing the eponymous “door knocker” flake and then heel-hooking on it. Inexplicably, he found himself airborne. The crash
pad had not been repositioned to protect the crux, and Hawley impacted the boulder-strewn fround.

“As soon as I hit, I knew something was wrong,” Hawley told Rock and Ice.

Hawley drove to the nearest hospital, John C. Fremont Medical Clinic in Mariposa, where he was told he’d broken his ulna in one place and his radius in
three places. Since there was no orthopedic specialist on staff, Hawley had to drive to Fresno to have his wrist set.

Two days later, Hawley went on a three-day, 28-mile backpacking trip. The pain did not subside, though he attempted to “gut it out” for almost two months.
On May 18, Hawley had surgery to repair the damage. He Hopes to be climbing again by mid-September.

Hawley himself was blasé about the accident, commenting that it isn’t very hard to effectively
spot the Door Knocker Traverse. “In the past, my 6-year-old son has spotted me,” he said.

This accident illustrates the risk of complacency. In the casual milieu that typifies afternoon laps on a favorite boulder problem, it is easy to adopt
a lax attitude and ignore protocol. Normally attentive spotters might drop their hands, pick up a beer, or ogle someone—and forget to move the
pad.

If Hawley’s spotter had covered the landing, Hawley might have walked away unscathed.

Still, the blame can’t be entirely placed on the spotter. Whether on a rope or bouldering, safe climbing requires the wholehearted participation
of both parties.

This accident could also have been prevented if Hawley had spoken up and requested a more diligent spot, or, perhaps, if he had positioned the pad himself
under the crux.

Here are a few more tips for preventing bouldering accidents.

1. Scope the fall line. Figure out where the crux is and where the pad/s need to be placed to protect a fall.

2. Suss the landing. If pieces of talus or gear can be moved out of the landing zone, move them. Check for pits and tree roots, and pad them accordingly.

3. Check the topout. If you can access the top of the boulder, do so. Preview and chalk up the last holds.

4. Communicate. If you’re spotting, let the climber know if you’re distracted or not ready to spot. If you’re the climber, alert your spotter before you
climb, and let him know you want and expect his full attention.

5. When spotting, keep your hands raised, thumbs tucked in, and aim to grab a falling climber by the ribs under the arms. Don’t try to catch the climber,
but only to decelerate and position him onto the pad/s.