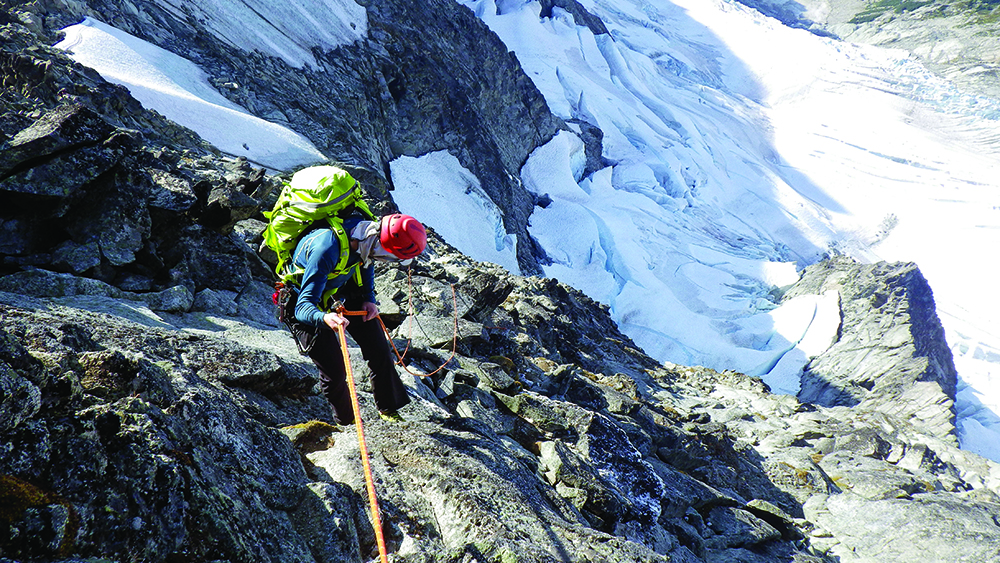 On the afternoon of September 14, Tyler Barton, a 31-year-old from Seattle, was descending Forbidden Peak in the North Cascades of Washington. He’d just climbed the West Ridge (III 5.5) with a partner, and the two men had completed three of five (or six) rappels that would take them down a slab/runnels to the climber’s left of the West Ridge Couloir and eventually land them on the glacier near the start of the route.

The West Ridge is a popular climb, one of the Fifty Classic Climbs of North America, with easy climbing and grand views. Like many of the “fifty crowded classics,” the West Ridge sees a lot of traffic and on that beautiful autumn Saturday, Barton and his partner were one of up to five parties on the route. The two were among the first to summit and they were halfway down the descent when an accident occurred. While standing unroped, Barton was struck by a falling rock about the size of a football. The rock knocked him off his stance and he fell about 300 feet to his death.

The standard descent from the West Ridge involves rappelling from blocks tied off with “nests” of tat. Over the years, the descent has become littered with slings, creating a confusing situation for climbers simply trying to find the best way off. As of August 2012, there were approximately 18 separate anchors in and around the descent couloir. At that time, a Cascades guide, Kurt Hicks, established a bolted anchor at the top of what he determined was the safest from rockfall and least environmentally impactful descent. Hicks’ anchor directed climbers down a rock rib and allowed a “fall line descent” to another, older, bolted anchor just above the glacier. For reasons that are still unclear, Hicks’ anchor was immediately chopped by North Cascades National Park (NCNP) climbing rangers, who also removed an the lower bolted anchor. The day Barton was killed, the descent—minus the bolted stations—was (and still is) loose, confusing, and exposed to rockfall. According to Barton’s partner, to reach one of these old anchors, the two were forced to unrope and traverse a narrow ledge. Barton was knocked from his stance while unroped.

According to Barton’s partner, the rockfall could have been initiated by pulling the rappel rope, or by the many climbers above them.

On crowded and loose peaks, including just about any popular mountaineering objective in the Lower 48, avoid climbing or rappelling below other parties. This accident could have been prevented if Barton and his partner had descended the East Ridge, an alternate (but less popular) descent on the Northeast Face of Forbidden. It is troubling that NCNP rangers chopped a legally hand-drilled anchor established to direct climbers down a more solid and safer descent. If Hicks’ anchor had been in place, Barton and his partner could have used this station and remained clipped in at all times. For a full report about the chopped bolts and the NCNP’s recent moratorium on bolting see TNB: Death on Forbidden Peak.