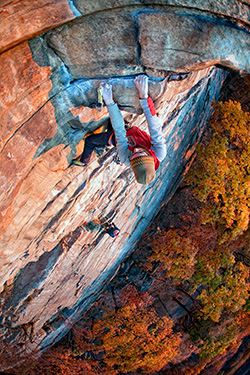 By the late 1980s the most obvious plums in the Gunks had been snatched, and for the first, but not last, time this storied conglomerate cliff outside of New Paltz, New York, was deemed “climbed out.”

As a photographer, I have found the Gunks to pose a similar problem—every aesthetic line has been shot to death, leaving little room for truly new imagery. I struggled with a sense that there was nothing new to offer because it had all been done.

Yet in the last few years, talented climbers such as Andy Salo and Brian Kim have brought a fresh perspective to the Gunks and are establishing amazing new routes in the most unexpected places. Their vision for what’s possible has made the climbing scene here feel as if it’s once again shimmering with possibility. Inspired by this new energy, I took on the challenge of giving the Gunks a new look. 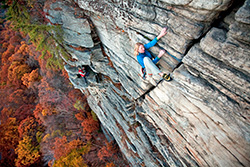 The uniquely striated white quartz conglomerate of the Gunks is famous, yet photographically speaking, it is a giant reflector and looks washed out when captured in direct sunlight. I decided to shoot the east-facing cliffs in the low-angled light of dawn. Getting this rare light, however, required hiking, rappelling and climbing in the dark, which can be disorienting. On the morning I shot Cascading Crystal Kaleidoscope (CCK), the sun was 15 minutes from breaking the horizon when our team charged to make the shot happen. I maneuvered into an exposed position suspended 200 feet above the ground, stabilizing myself in the freezing morning air. As the sun peeked over the horizon, the bone-colored stone turned ruddy, taking on a muted saturation of pink and orange, while the backlit foliage burst into psychedelic flames. Richie Martinez reached the crux section just as the light hit a crescendo.

My second guiding principle in photographing the Gunks was to approach each shoot with shoshin, or “beginner’s mind,” to discover original angles and body positions that avoided photographic clichés. A saying in Zen goes, “In the beginner’s mind there are many possibilities, but in the expert’s there are few.” The shot of Emilie Drinkwater on Shockley’s Ceiling  is probably my most successful example of taking an over-shot line and striving to make it feel surprisingly new. A well-known photograph of this beloved 5.6 taken by Ed Cooper in 1963 shows the Vulgarian and guidebook author Dick Williams climbing the crux roof naked. Cooper had chosen a great angle because it showed the intimidating roof and exposure, while thankfully obscuring Williams’ family jewels. Most shots of this route have emulated that convenient perspective, which leaves out the distinctive belay station that appears to hover in the air below. I think this shot gives the route a heightened sense of exposure and showcases the belay that serves as the launching pad for an unforgettable adventure. 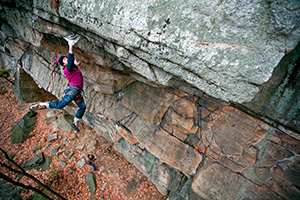 Though my original goal was to document the moderates for which the Gunks are renowned, I quickly modified this to include harder lines after shooting Tim Keenan on the intimidating Yellow Wall (5.11c). I recruited my friends Andy Salo and Scott Barocas for a session at the Near Trapps, where Andy would re-lead Double Cross (5.12d R), a bold route he had put up three years ago with Mike Suidy.

To make the first free ascent of the route, Andy had had to clear his mind of popularly held notions of acceptable risk. He transcended expert opinion by looking within and trusting his judgment.
When I rappelled into position, Andy was setting up a toprope anchor so he could rehearse Double Cross. His improbable route involved a dyno from an insecure stance a full body length above his last pieces of gear—a small nut and a #1 Black Diamond C3. From there it was another 20 feet of thuggish climbing to his next pro.

After one successful toprope, Andy was having reservations. Just a few months prior, he had had a tendon in his hand reattached, and, although he was climbing well, he didn’t feel in top form.
“What the hell was I thinking when I led this?” he exclaimed. “I think we’re only going to get one shot at this.” He seemed a little nervous about the lead. I told him not to feel any pressure.

“Do you think it will look cool?” he asked.

“You have to do this for yourself,” I said, not wanting to push him. “And, yes. It’ll look cool.”

“OK, that’s all I needed to hear,” he said, and immediately tied in as drops of rain began to fall.

He climbed effortlessly to the crux and fired the dyno. His feet ripped off the wall as he latched a good right hold and let out a primal scream. Andy climbed smoothly to his next piece of protection, and clipped the anchors.

The tension of watching someone so far out on the sharp end dissipated. As I previewed the photos on my camera’s LCD, I smiled. The possibilities were many.

Tomás Donoso is a photographer based out of New York City and frequent contributor to Rock and Ice.