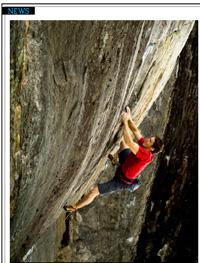 It took 35 days, or maybe more. “I stopped counting after I knew it was going to take me a while just to do the moves,” says Vasiliy “Vasya” Vorotnikov of his efforts on the Rumney, New Hampshire, route he calls Jaws II (5.15a).

The crimpy horror show was originally called Jaws when Dave Graham put it up in October 1998 at 5.14b. It was infamous for a long deadpoint to a right-hand crimp. Luke Parady then stuck the move, but his redpoint for the second ascent took two years. About five years ago crucial holds broke in the crux sequence, and the route in its busted state sat undone until now.

Does V13 into V11 add up to 5.15a? Vorotnikov laughs. “Surely I’m expecting someone to say something like, ‘No way it’s that hard.’ The 5.15a grade is merely a suggestion. I could call it a ‘soft 5.15a’ but something about those words just doesn’t fit together.”

Tim Kemple, longtime leading New England climber, says the amount of time the route took Vorotnikov, spanning a year and a half until the October 14 send, is “scary, because it’s definitely his style.”

“Not too many other routes can compare difficulty-wise,” Kemple says. “It’s the hardest line on the East Coast, and a contender for the hardest in the country.” He also speculates that Jaws II is likely more difficult than other “V13 routes” such as The Fly (5.14c/d) and Psychedelic (5.14d), both Graham first ascents; the latter is unrepeated.

Vorotnikov, a chemical engineering student at the University of New Hampshire, has sent the Rumney testpieces Livin’ Astro (5.14c), the link-up Livin’ Astroglide (5.14c) and the 5.14b’s Supernova, China Beach and Steady Slobbin.

Jaws II joins just one other potential 5.15 in the United States: Tommy Caldwell’s Flex Luthor, at the Fortress of Solitude, in Western Colorado.