Every couple of years, my son Tim, Jr. and I take a climbing trip together. Usually we pick one of my “dream climbs”—those classic routes that you always hear about, but seem too difficult to consider seriously. But my son encourages me to climb harder than I think I can, and together we have done The Scenic Cruise, The Naked Edge, Primrose Dihedrals and most recently Lotus Flower Tower. It is especially cool for me both to tick a lifetime goal  and climb with my son. 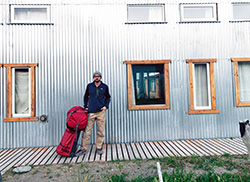 This year he suggested we go to Patagonia. I said that Patagonia was something I’d never considered. Sitting around in a tent for weeks at a time while waiting for the weather to clear was not my idea of fun. I said, “No, I’d rather go somewhere where we can actually climb something.”
He had been there before on a photo shoot, and had the opportunity to “run up “ one of Patagonia’s storied alpine routes with a friend.

I don’t “run up” anything. I have been climbing for over 40 years and am the consummate plugger. It took me years to lead 5.5, and several more to achieve my goal of “solid “ 5.9. My contemporaries and I at the time felt that at that standard of free climbing, you could do most of the classic climbs. Anything harder we could aid.

Junior was just the opposite. He first asked to tag along when he was 11. He out-climbed me that first day and hasn’t looked back. His second route was a long multipitch 5.9 on Hallet’s Peak in Rocky Mountain National Park, while on a family vacation. While I still struggle to lead 5.10, he bettered this on his second lead. He isn’t even working until 5.11 and grade IV routes only take him a few hours.

But Junior insisted that if we spent three weeks in Patagonia we could get something done. “The weather in town isn’t bad,” he said, “and we’ll get enough of a break to climb something really cool.

“Dad, there’s a short weather window beginning in 36 hours,” he said. “This could be the only good weather we see. We have to hustle!”

We had just arrived in El Calafate, southern Argentina, after 17 hours of air travel. I was looking forward to taking it slow and steady: resting, stocking up on supplies and catching an afternoon bus to El Chalten. Instead, I was being shoved into the deep end.

“Let’s go for the Whillans Route on Poincenot,” said Junior, having already made up his mind. So much for rest or supplies.

Early the next morning we were on the bus and arrived in El Chalten at about 11 a.m. After a quick gear sort, we tossed excess baggage into our little room (man, that bed looked inviting!) and hoofed it out the door. Soon we had completed the hike to Laguna de los Tres, a highlight for many of the trekkers who venture this far south, and, as we both agreed, one of the prettiest lakes we had ever seen. The steep faces of Fitzroy and Poincenot reflected perfectly in its waters.

Out of time and energy, we bivied just above the lake. From the front door of our tent we could clearly see our route: a long snow ramp leading to an obvious rock ridge. This 1,800-foot classic was first climbed by Don Whillans and Frank Cochrane in 1962, and rated 5.9. The start of the route seemed to be just a couple of hours away.

In the pre-dawn, we donned our crampons and started hiking up a glacier under incredible starlight. Jupiter was nearly as bright as the moon back home. The serenity of our situation was interrupted when I suddenly broke through the crust to my knees. Being on a glacier, unroped and surrounded by crevasses freaked me out. More than a couple of times I punched through the ice crust. But I wanted to be an equal partner, and stopping to rope up would’ve slowed us down.

Things worsened as we traversed a rock band on rotten snow, with serious potential for injury. At that point I broke down and said, “Tim, everyone has a box he is comfortable in, and we are outside mine here! I want to rope up!”
Junior managed to egg me on a little further to Paseo Superior, the normal bivy site for our route. But in this unstable snow, clearly it was going to take me several more hours to reach the start of the climb. One look at the weather and we could see a wall of clouds was closing fast. We headed down. By the time we reached town it was snowing in the peaks.

Lesson one: While the climbs are not longer than a typical Yosemite day climb, the approaches are long and time-consuming. Have your snow-climbing game on, and travel as light as possible.

We spent the next two weeks checking the twice-daily forecasts, wandering around town looking for supplies, hiking past beautiful wildflowers, watching condors and sport climbing. Yes, sport climbing in Patagonia! We found that there were over 200 well-bolted routes from 5.8 to 5.13, with the majority of climbs 5.10a or harder. Though the weather in the mountains remained bad, here in town it was sunny enough for cragging most days.

My favorite area was Pared del Diedro Grande, an obvious group of dihedrals just a few minutes’ walk from the visitors’ center. The crag was home to several good 5.10s and 5.11s, but the best was the trad line Diedro Grande (5.8). Junior preferred the steep cliff El Calamar, which stays dry in the rain and offers harder climbs starting at 5.11 and going up to a few 5.13s. To reach El Calamar, I recommend taking a taxi, which will return for you at a designated time.

A link on www.Pataclimb.com, a website with route information and trip beta, brings you to graphs that show the barometric pressure, wind speed and direction and temperature for the next several days. The information is surprisingly accurate. After staring at the graphs for too long, Junior spied the next break in the weather. We headed back into the mountains, this time for a shot at the Comesaña-Fonrouge route, described on the website as “the perfect choice for a first climb in the area,” on Guillaumet’s northwest ridge.

This time we took a taxi to Rio Electrico, about 10 miles along the dirt road that runs north from town. A couple of hours of beautiful, flat singletrack through beech forests led to one of the steepest trails I have ever seen. Three hours later we were bivied at Piedro Negra, a typical rocky alpine bivy with water nearby.

It was cloudy and cold in the morning. We stomped through snow that eventually was waist deep. About the time I became concerned with avalanche potential, we were able to traverse over to a rocky ridge where we could belay. A couple of pitches of easy snow led to the actual start of the climb. The route started up snow-covered rock, with icy cracks, and had obviously not seen the sun in several days. My hands and feet were numb, and I could barely get up this, the easiest part of the climb.

I said, “Tim, this is not fun. I’ll never be able to get up this thing quickly, and I think we should turn back.” Almost as soon as I said this, it began to snow hard. Damn! If I had waited two more minutes, I could have blamed the weather. Once more we made the long walk of failure back to town.

Lesson two: Learn how to read the twice-daily weather forecast. If it isn’t really good, be prepared for a cold, snowy climb in gloves.

I was becoming disenchanted with Patagonia, almost regretting that I had come. Ready for a change of scenery, I considered heading across the border to the Towers of Paine in Chile, where I had heard the approaches were shorter. However, labor unrest closed that park temporarily, so we stayed in El Chalten.

Junior said, “Looks like there might be a good window on the 25th, Dad. What do you think? Should we give it one last shot?”

I thought about another long, exhausting approach, and the fact that I had to catch a flight the next day, on January 26.  I said, “Tim, this time we need to pick an objective we can get up and down in one day.”

We settled on an alpine traverse of Aguja de l’S, a summit just south of Poincenot on the Fitzroy skyline. It again offered steep snow to a short rock ridge. The climbing was supposed to be about 5.10 with a fabulous summit. By going over the top and down the other side, we could expect to save about three crucial hours on the descent.

I began to feel more confident since the objective seemed doable. Also, the group of seasoned climbers we had met in Patagonia were heading into the mountains, too. The American climbers Mikey Schaefer, Kate Rutherford, Colin Haley, Pete Fasoldt and Eli Simons were not only great to hang out with, they were supportive, taking time from their new-route plans to help us gear up.

A nice three-hour hike up the Torre Valley landed us at the base of the Torre Glacier. From there, it was five more hours of hiking on ice, and navigating moraine and boulder fields. Our first attempt at a bivy was untenable, as strong, howling winds tried to shred our tent. Tim picked out a place a quarter-mile higher, where we were better sheltered. Here we could hear the wind whipping below us, and settled in for a fairly comfortable night.

Lesson three: Head into the mountains in marginal conditions to make the most of a fair-weather window.

In the morning we headed up the long rising gulley system that slashes diagonally beneath the peaks Raphael and St. Exupery, finally becoming a narrow couloir. A little moderate mixed climbing and several ropelengths of snow led to a notch between Poincenot and Aguja de l’S. We met incredible views, with the ice-encrusted Cerro Torre golden in the early-morning sun.

We climbed three pitches of discontinuous flakes and corners right on the arete to the last, and best, pitch. It spiraled around the summit pyramid and ended in a final well-protected 5.10 move onto the summit. We had done it—a real Patagonian summit! The view was 360 degrees of blue skies and amazing peaks.

Now all that was left was a long descent. Adventure rappelling the other side of the notch led to another glacier. We stayed roped up this time and despite post-holing much of the way, made steady progress. We reached El Chalten at midnight, and I was on the bus to the airport early the next morning.

Final lesson: If you can climb in the Rockies or Sierras, you can climb here. You need to prepare yourself with the lightest gear you can afford, pick reasonable objectives and choose a highly motivated partner. Then, with a little weather luck and persistence, you have a good chance of success. Even if the weather shuts you down, you will have visited one of the most beautiful places on earth, and will be making plans to come back.

Tim Kemple, Sr. has climbed for over 40 years, and works as a podiatrist in Derry, New Hampshire, where he lives with his wife and two dogs.

Is Patagonia Now a Playground?