Clayton was trying to convince me to let him give the newly scrubbed project a burn. “C’mon, man, if I get up to the top I’ll just drop off!” he said.

I was shooting video for “Colorado Daydream” and hoping to film Brian Capps, an undercover crusher on the Front Range, making the first ascent of the line I had cleaned. Brian was running late, and Clayton Reagan, another prolific local crusher, showed up early. I hesitated—Clayton was likely to send it and ruin my filming plans— but I’m also not much of a red-tagger.

Sure enough, from the sit-start, Clayton powered through the stout entry moves and the massive reach using a heel-hook to a midway jug. He stopped at the jug rest and smirked at me. “No way I’m dropping off this problem!” he said. He took a deep breath and punched through the heady topout. Small Axe (V8) would become one of the most famous boulder problems in Poudre Canyon.

Stretching 60 miles up from Ted’s Place to Cameron Pass, Poudre Canyon has for decades been a granite destination in the very backyard of every Fort Collins climber. You can reach the mouth of the canyon in little more than half an hour from downtown Fort Collins.

Up until the last dozen years, the area was largely overlooked and off the radar of most Front Range climbers, so Poudre locals enjoyed years of development and exploration away from prying eyes. Prior to around 2005 the region was mainly known for the multi- pitch trad of Greyrock and a few here-and-there crags close to the road, but since then

it has witnessed the arrival of sport climbing and a surge in bouldering. Now the canyon is a varied climbing destination that boasts, in addition to Craig Luebben trad classics, Ethan Pringle’s Coach Myles (5.13d) and Zach Lerner’s Creme de La Poudre (5.14b), both established in the last few years.

Development of trad routes in the Poudre began in the 1960s and 1970s. Greyrock, a 7,613-foot peak above the Poudre River, looks like a dome you’d find in Tuolumne, but with more features and cracks. Jutting up from a beautiful meadow, it has some of the most classic gear routes in the canyon, and provided some of the lowest-hanging fruit for early development. Steve Allen and Rodney Ley forged a lot of these routes. Allen’s Aunt Edna’s Costume Jewelry (5.7) from the 1970s now has better pro and some closely spaced bolts, but was originally graded X.

In the 1980s, Jim Brink, Pat McGrane, Don Braddy and Jeff Bassett continued to push the difficulty with a “ground-up” style, and explored an area now called the Narrows, where steep granite walls greet the road. In the early 2000s a third wave of developers, led by Derek Peavey, Ken Gibson, Bryan Beavers and Paul Heyliger, filled in the gaps, adding a slew of hard bolted lines in a Poudre renaissance that just seemed to keep going. Four-star bolted routes appeared at the Palace, Crystal Wall, Triple Tier Area, Electric Ocean, Upper Echelon, Sheep Mountain and a variety of crags in the Narrows; entire areas were discovered. Tailspin, a pumpy 5.12b with big reaches between decent ledges, needs to be on everyone’s tick list, as does the trad route East of Eden (5.9), a right-facing dihedral with an early crux that sucks up gear.

Some of the steepest and most strenuous climbing in the Poudre can be found at Vista Crag, a 90-foot wall of marble-white, calcite-covered granite, brightly streaked with orange and yellow varnish. This aesthetic cliff provides a surprising variety of challenging holds that stretch out in every  direction. The approach is steep but those hardy enough to take it on are rewarded by some of the best rock in the canyon. If you’re sending 5.13s, be sure to do the crag classic Slippery Slope (5.13c).

During the mid-1980s and early 1990s local climbers like the famed alpinist Mark Wilford and Horsetooth tugger Steve Mammen roamed the Lower Canyon and up to Greyrock looking for boulders. Even John “Verm” Sherman passed through and established the stand-start to Merlin (V7) with Wilford. It was years before anyone else would venture so high in search of bouldering.

The Upper Canyon generally refers to anything beyond the town of Rustic, a tiny retirement village beyond which early Fort Collins climbers rarely ventured. Getting there requires an hour or more of winding roads with no guardrails, which is likely why this area was the last to see significant development. But the long drive reaps rewards of superb rock quality and boulders far larger than those in the lower reaches of the canyon. The stone boasts Cresciano- style slopers, steep-angled edges and crimps, and incredible pinstripe layers of quartz and compact crystals. 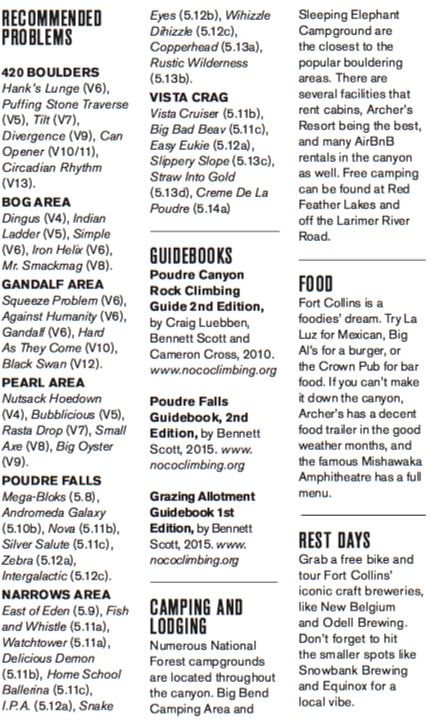 Hank Jones, an itinerant Fort Collins climber, was the first to park his RV in the Upper Canyon with the sole intention of establishing boulder problems. Some of the first were Hank’s Arete (V5) and Hank’s Lunge (V5)—beautiful lines on a free- standing granite egg called, you guessed it, Hank’s Boulder. Then Merlin (V7) and Gandalf (V6), both proud, aesthetic lines, inspired Poudre enthusiasts to go out and find their own dream boulders.

In 1999 the avid developer Pat Goodman and I checked out some of Hank’s established problems at the Bliss State Wildlife Area and decided to take a walk into the woods. There we found a diamond-shaped boulder of perfect dark granite about the size of two school buses and overhanging onalmost every side. To add to the allure, the boulder was resting on two smaller blocks, so it appeared to float in the air like a magic trick. A shelter had been built under the boulder using stacked logs, all carved with the number 420. A group of hippies had stayed there some years before, and onone of the underpinning blocks someone had recounted, in permanent marker, their “herbal experience.” We unceremoniously took down the shelter and started cleaning holds that would become It’s Ice (V5) and the infamous Dave Graham testpiece Circadian Rhythm (V13). When we returned to the Fort, the name 420 Boulders was coined, and much to the chagrin of local DOW land managers, it has stuck.

The canyon continues to grow and evolve with every generation of climbers. Devout boulderers continue to find jewels in the most overlooked spots, and recent areas, such as Prione, Poudre Falls and the Narrows Blocs, are evidence of the potential still lying in the canyon.

Ben Scott, a climber of 22 years, is the president of the Northern Colorado Climbers Coalition.