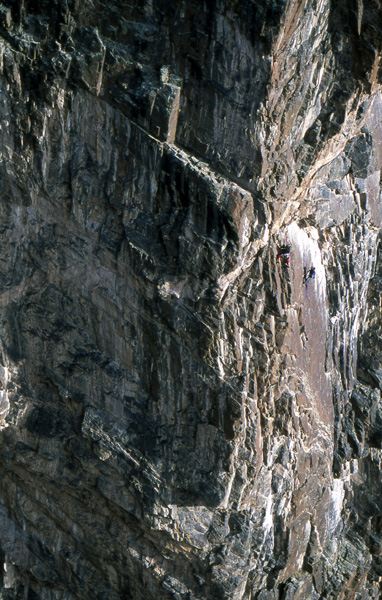 “If I ever did a first ascent,” my friend Brandi said, “I would call it Super Wuss.” After belaying Brandi for nearly an hour as she hung, battled and grunted up the red 5.6 at the Boulder Rock Club, I could see that she was probably not destined for new routing. But the name made me laugh, and I thought it deserved a home on a future first ascent.

The following weekend Kevin Cochran and I blew off Boulder’s hedonistic annual Halloween celebrations, and drove west over the mountains to the Black Canyon. A striking arete in the Fisherman’s Gully had caught my eye, and it might be just the place for the mighty Super Wuss to come into existence.

Kevin eyed my chintzy piton hammer with suspicion, but as usual he seemed content to help me with whatever crazy scheme I’d concocted. That is, of course, if it sounded reasonable enough and he wouldn’t suffer too much.

On Saturday morning, as we rambled down the gully, I commented on how much I loved waking up late to a downhill approach. No other area rivals the Black in terms of potential adventure, combined with easy approaches and sublime camping. Of course, you might regret thinking this way the next time you leave the North Rim Campground at a leisurely hour, only to find yourself entangled by bushes in The Prisoner of Your Hairdo Gully and eventually benighted on Atlantis.

Picking a handsome line of corners, Kevin and I started up casually, finding well-protected climbing and moderate terrain. Sadly, we also found some bolted anchors—bizarre, since they weren’t on the belay ledges. Fortunately, within a few pitches, whatever climbers had deemed the route civilized enough for bolted belays had realized their error and rappelled.

At a midway ledge covered in grass, Kevin and I peered up into the meat of the route—a soaring blocky arete, overhanging for 300 feet. After staring at the steep, intimidating terrain, Kevin shot me a look indicating his concern that his suffering might be about to go beyond acceptable levels. I tried to allay his fears with a cliché, “Sweet, looks splitter.”

As I started into the nebulous red wall above the grassy ledge, I regretted my flippant comment. Gear was sparse, and I wandered about from seam to seam, trying to look as if I was comfortable and confident; I couldn’t give Kevin an excuse to bail!

Wiggling a #3 Camalot into a pod, with only two lobes engaged, I zigzagged upward, unsure of where to go. Out onto the arete proper, or back right into some promising flakes? I rocked over my left foot toward the arete, and the foothold popped. My scream probably scared Kevin more than me, but shockingly the #3 held. As I hit the end of the rope, the route’s name was sealed, and now it even had a pitch name, “Flight of the Super Wuss!”

After letting my fear and embarrassment subside, I started up again, this time moving right to the flakes. I arranged an uncomfortable hanging belay, and brought Kevin up.
“Seems a bit dodgy,” he said.

“No big deal, another pitch and it’ll be easy to the top!”

I grabbed the rack as quickly as I could, and pushed left again toward the arete. After a few panicky moments when I could find no pro, I spotted a slot for a small cam, and bouldered left again to gain a comfortable ledge positioned beneath the less menacing side of the giant arete.

A few moderate pitches along the edge of the arete, with spectacular exposure and position, deposited us safely into a sea of thorn bushes, a painful end to a memorable climb with a good friend.

If you choose to climb Super Wuss, be warned that while it is my favorite 5.10, it’s probably not the best one that I’ve climbed (that would be Lotus Flower Tower). Although I’m generally not prone to “first-ascentitis” (a common and serious affliction that causes many first ascentionists to see their routes as superior to all others), in this particular instance I might be guilty. Then again, Super Wuss might just be the best route in the Black—the only way to know for sure is to give it a try.

Logistics: The Black Canyon of the Gunnison National Park is located in Southwestern Colorado, with the North Rim accessed via the town of Crawford. Best seasons for climbing are late March through May, and September through November. Visit the Black Canyon National Park website for current conditions, road closures and campground status.

Beta: A double set of cams from tiny to 3.5 inches, a single 4-inch piece, and a single set of RPs and nuts should be enough to get you up most routes, including Super Wuss. The Black was the birthplace of the “rope, rack, and the shirt on your back” mantra, so most parties travel light, sacrificing a bit of comfort for speed and efficiency. Ultra-light approach shoes, a quality wind shell, and a big chalk bag with a pocket for bars and a headlamp should take the sting out of either an early-morning approach or a late-night “walk of shame” out of the gully. Super Wuss can be seen from Balance Rock Overlook, and a topo is available at the North Rim Ranger Station. It receives morning shade and afternoon sun.

Josh Wharton is one of America’s top alpine climbers, is fresh off The Wave Effect, an enchainment of the Patagonian titans Desmochada, Aguja Silla and Fitz Roy (see Rock and Ice, Issue 196, for feature). He lives in Estes Park, Colorado.