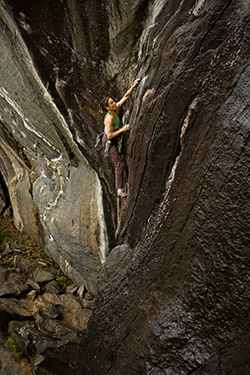 I’ve spent the last decade traveling to the world’s best sport-climbing areas, but a recent trip to my old stomping grounds reminded me of how good we have it here at home. Rumney, New Hampshire, is a rather small area but it is stacked with over 700 sport routes spread out over 20some crags on Rattlesnake Mountain.

Of all the routes that I’ve done at Rumney, one stands out: Waimea (5.10d), which shares the name for the area’s best crag, and is the first route I ever tried at Rumney, 15 years ago. I had just received a rope for my 15th birthday, and had ordered 10 quickdraws that came in the mail. Finally with climbing gear, I felt like I could climb anything.

The barreling wave of the Waimea wall was insanely intimidating, and so were the people climbing there: real-deal climbers hangdogging, talking beta, and looking in-the-know. I was a chuffer and had no clue. One of the best things about Rumney is that really hard routes neighbor relatively easy ones. Climbers of any level can climb together at all of Rumney’s walls and everyone can have a good time. But this can also be intimidating for beginners.

After racking my new draws on my harness and tying into my new rope, I tried to lead Waimea, but the crux thwarted me, and I whipped there many times. It was embarrassing, and eventually I had to admit defeat and ask one of the badass climbers to retrieve my draws. That concluded my first day at Rumney.

I improved, and soon found myself climbing there all the time with Dave Graham and Luke “Gomez” Parady. We were just teenagers, out having fun and pushing each other. Dave led the way, pretty much single-handedly establishing 5.14 in the Northeast, with Gomez right behind him. I was third best, but went from climbing 5.13b to 5.14b in six months.

Waimea was always the standard first warm-up for us. We climbed it literally hundreds of times, yet Waimea was still satisfying and always enjoyable. It’s striking and aesthetic, taking the well-defined path of a pure black water streak on smooth, rounded patina holds: water-polished and extremely fun and comfortable to grab. The route is completely accessible, and located in a perfect little corridor, surrounded by the proud Jaws II (5.15a), China Beach (5.14b) and Livin’ Astro (5.14c).

Still, I am not one for routines, and to break up the monotony of always climbing Waimea first, Dave, Gomez and I invented games to keep the route interesting. It became kind of a joke to see how hard we could make it. First we did it in tennis shoes. Then without chalk. Then with just one foot, or in the fewest moves possible.

We would go all “Sharma” on it, just clipping the first two bolts of the five-bolt line, and climb it just like that. For what reason? I don’t even know! Then we got all “Henry Barber” on it, and would climb barefoot. Climbing barefoot was hard, but the thing that made it hardest of all was climbing in socks. Sometimes we’d solo it. Other times, we’d tie in and lead it normally, but then just fall on purpose. It was a ridiculous show, but it always made us laugh. Thinking back, I laugh even now. On a recent visit I climbed at Waimea again. Anytime I’m at Rumney, there are three must-do routes that I always make a point of repeating: Rhythm X (5.13b/c), Technosurfer (5.12b) and, of course, Waimea, the best 5.10 in the world.

Directions: From Rumney, New Hampshire, turn onto Main Street, and then take a left onto Buffalo Road, heading toward the Rumney Rocks parking lot about a mile away. Please don’t park on the road; park in the lot and pay your parking fee. While walking on the road to reach the turn-off points to the cliffs, keep in a single file. Depending on which wall you want to visit, expect between a three- and 30-minute hike.

Season: Spring and fall are the lucky seasons and summer is way too humid and buggy. If you are a diehard New Englander none of this will even matter to you. But for visitors—summer is hell! DON’T GO THEN! Since Rattlesnake Mountain faces south, sunny days can provide great conditions in the winter.

The Blow by Blow: John Mallory did the first ascent of Waimea, which follows the prominent black streak ending on a slab three-quarters of the way up the Waimea wall, in 1993. Like most routes in Rumney, this one has been rebolted with solid, beefy, glue-in bolts courtesy of Ward Smith and Team Tough, who have equipped pretty much everything on the mountain. The route takes five bolts to rap rings. Waimea is straightforward, but it gets pumpier and cruxier the higher you climb. A solid resting jug comes right before the crux, so utilize that sucker and form a plan of attack on your first try. The crux involves trusting a right-foot smear and grabbing vertical runnels to make the technical moves. The bolt placement is just low enough to give you a little thrill just before you stick that final hold. PHEW! 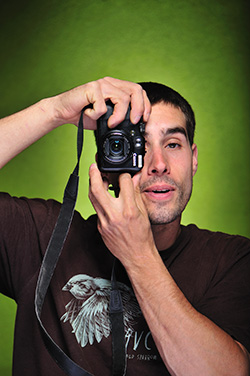 Joe Kinder is one of America’s best sport climbers and most active developers, with many 5.14+ repeats and first ascents under his belt. His photo and video work can be seen on his website, joekindkid.com. He is currently summering in South Africa, helping locals develop new sport crags.