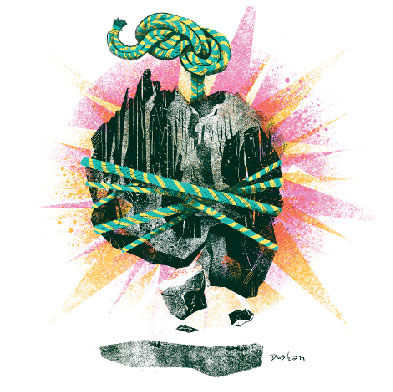 Looking back, I knew I should have paid more attention to something
that happened about a week before. Bob Almond and I, both in El Potrero Chico for the winter, had walked up to the Ripped Wall to climb the fantabulous
Strokin’ the Bishop. The approach is steep but only 20 minutes, so I was surprised to arrive at the base struggling to breathe, and with my
heart pounding. After a rest I calmed down and Bob tricked me into leading the 5.11c pitch while he grabbed the initial 5.9.

A week later Bob and I found ourselves at the base of Diablo’s Path, a six-pitch Kurt Smith route taking a long, leftward-rising traverse on the
severely steep 600-foot Outrage Wall.

Multi-pitch routes at El Potrero Chico, near Monterrey, Mexico, and a premier destination for big-wall sport climbing, are not simply sport climbing, but
rather long bolted routes on big serious rock. They are committing.

The first three pitches featured enjoyable climbing on steep rock and big holds. The fourth pitch started up overhanging blocks, which led to a smooth,
exposed wall splattered with what looked like bits of flung mud, but serve as small, crimpy holds. At this section I began to feel dizzy.Whoa, was
I getting vertigo because of the aspect, a straight look down 300-plus feet, with hillsides dropping off below? I struggled to the roof and grabbed
the obvious holds, but was unable to pull through. What? After three or four attempts I finally pulled the move, dizzier than ever. Now pain
was beginning in my left arm and shoulder and I was really having trouble breathing. Forty feet to go to the anchors and every step was a fight.

I stumbled onto the ledge, yelled, “Off belay,” and took stock of my situation. I was having a heart attack, and because of the length, steepness and traversing
nature of the pitch I couldn’t simply be lowered. Bob would have to come up before we could figure out how to get off. I began pulling up the rope
but after only about 20 feet I couldn’t hang on and it fell away. I felt as if I was in a tunnel and the light at the end of it was growing dimmer.

“No!” I screamed, and began gulping big mouthfuls of air. The action revived me a bit and I tried again twice to pull up the rope, each time dropping it.Finally
my condition seemed to stabilize, and I was able to haul the rope up and get Bob on belay. When he appeared over the roof, I explained what was happening.
I’ve never seen anyone climb 40 feet so fast.

If you’re ever having a heart attack high on an overhanging wall, be sure to have Bob Almond with you. He remained cool, calm and collected, and sprang
into action. Seeing some of the San Antonio crew coming up the trail below, he called to them and explained our predicament. One person immediately
started running down the trail for a vehicle, while the others scanned the wall and pointed out that if we could get back down the fourth pitch, we
should be able to rap from there to the ground. Bob quickly set us up and began lowering me.

I had to back-clip into each bolt or I would soon be hanging 20 feet out from the rock. Clipping a quickdraw into the first bolt I reached, I pulled myself
to the right and clipped the rope into the draw.I’d managed to remain fairly calm throughout, but now I began to panic:When I tried to let go of the
draw, my hand wouldn’t respond. Great, now I was having a stroke.I had to reach over, pry my fingers open, place another draw in my right
hand and close my fingers over the draw with my left hand. Fortunately my arm worked to pull myself over to clip the rope each time, but my hand continued
to refuse to respond.

Reaching the third-pitch belay, I waited for Bob, who arrived in record time, reeled the rope in and set up to lower me to the ground. When I reached terra
firma, our three friends tried to carry me, but the trail was too steep, rocky and narrow. What worked best was for me to walk with all three of them
holding me up by my harness. At the bottom of the canyon, a truck was waiting to whisk me to the small clinic in Hidalgo.

The doctor on duty took one look at me and called for the Hidalgo ambulance to take me to the hospital in Monterrey. The ambulance, a converted VW bus,
arrived quickly but before we could get on the road the driver had to stop at City Hall to get a voucher for gasoline, and then stop at the Pemex for
some fuel. Then he wove in and out of traffic, siren wailing and horn blasting, the 30 miles to Monterrey.

Monterrey has some fine hospitals but when you have little money and no insurance you’ll probably end up at the University Hospital, also known as the
People’s Hospital. The emergency room was a horror show: crowded and dirty, with used syringes lying on the windowsills, a dead guy lying next to me,
and people throwing up all over the place. But the staff rushed me to a room while my long-suffering wife, Tami, who was new to Mexico and didn’t speak
Spanish, dealt with the admitting procedures. The staff insisted on an HIV test; after all I was a skinny, long-haired gringo with cuts and bruises
all over my arms and legs.

One of the doctors confided, “Man, if you have any money you should get yourself into a better hospital.”

After a few hours, the HIV test came in negative (I always wondered about that—not because of risky behavior but because I’d had numerous transfusions
when I had cancer years before) and I was moved to Intensive Care.IC was a different world: brand-new and state of the art.I spent three days there,
and learned that I was truly fortunate and my condition could be treated with medication and without surgery.On the fourth day, I switched to a dorm
room with eight beds, and spent the next week there.The cardiologist was a great guy who made me take a treadmill test before he released me.

Tami and I drove up to Austin to get me checked out by a top heart surgeon, who had me describe everything that occurred in the hospital in Mexico, and
then said, “They did everything according to the latest protocols.”

To top it off, after I spent 10 days in the hospital, including three in intensive care, the whole bill came to only $600.

I continue to climb, I just no longer travel to cliffs more than a couple of hours from a good hospital. In the 20 years since my heart attack, I’ve bolted
more than 85 routes in the Potrero. Most are long multi-pitch lines.

Also read My Epic: The Fall – A 60-Footer Leads to … Inspiration?