Tobey and I sat in a drab military classroom, hurriedly stowing a topo of Laurel Knob’s classic Groover (Grade III, 5.8) as an instructor charged into the room to read us the rules for our training in North Carolina. “You’re Uncle Sam’s investment,” the fat sergeant barked. “So no dumbass stunts like skydiving, bungee jumping and scuba diving.”

Tobey and I met eyes. So far, nothing about climbing, so technically we were still good.

After the brief, I pulled Tobey aside, asking, “Hey, remember Royal Robbins at Fort Bliss? Forged passes, secret trips back to Yosemite, hitching rides. He knew his priorities. What are ours?”

“Then it’s time to start planning Operation Groover,” I said. From then on, we went clandestine.

“There’s places to camp here,” grilled Sergeant Tubby. “What the hell you going to do there?”

“Western North Carolina is the land of the waterfalls,” I hedged.

“What are you, my ambiguously gay duo?” Tubby snapped.

“Yeah, hiking,” I chimed in, corroborating the lie. Tubby shook his head and signed the pass. We didn’t yet know it, but we had just declared war on good karma.

We locked up the truck and began the walk to the cliff base. A couple of pleasant hours later, we stood staring up at Groover’s arching crack system. 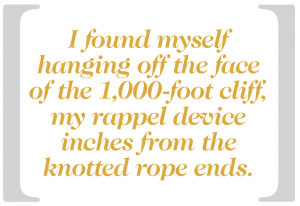 “Carrying shoes?” Tobey queried. I squinted up at the face, searching for the adjacent descent route.

“Nah,” I replied, spying the last rappel anchor. “We won’t be walking. We’ll come down right over there. On belay?”

Six pitches of thrilling cracks and smooth water-groove climbing took us to the top of Laurel Knob, elated but, as storm clouds built in the late-afternoon sun, with a sense of haste. We traversed to the rappel route, but discovered only a single bolt and hanger, sunk into a boulder. With daylight fading, we backed up the bolt and I rappelled to search for another anchor.

I found a set of rings a full ropelength below and, confident that we were on route, waited for Tobey, then descended again. Yet 60 meters further, I found myself hanging off the face of the 1,000-foot cliff, my rappel device inches from the knotted rope ends. No rings, no bolts. I pendulumed, then studied the topo, trying to match up water grooves on the smooth slab.

“No bolts,” I yelled back. No place for a gear anchor, either.

Thunder rumbled. Frustrated, I yanked out my prusik cords and worked back up to the ledge, arriving just as the first raindrops hit.

Deviating from the rap line, I busted through a grove of mountain laurel on low-angle slab and soon stood above the tree island. Tobey struggled up after me, scratched and dragging foliage.

Ignoring him, I stacked the rope. “Operation Groover is in abort mode,” I sighed. “Any bright ideas?”

“Yes,” Tobey replied. “Take our chances with the locals, catch a ride back to the camp, and drive the truck around to pick up the packs.”

I slapped at my empty pocket. “The keys are in my pack,” I mumbled. “My pack is at the cliff base.”

Tobey rolled his eyes. “It’s going to be a long night.”

Our feet clad in climbing shoes, we stumbled in a drizzle into the maze of thicket and private roads on the back of Laurel Knob. After 20 minutes of bushwhacking, we emerged onto a gravel drive. I turned and limped along a road winding downhill. Tobey walked ahead as I stopped to remove my shoes. 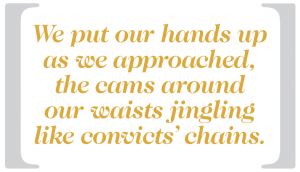 Sure enough, a house glowed through the trees. We staggered toward it, pausing when a chorus of barking erupted from the house. The front door opened and an armada of chihuahuas and terriers raced across the yard. A woman appeared, peering into the darkness. We put our hands up as we approached, the cams around our waists jingling like convicts’ chains.

“Excuse me, ma’am,” I said, using my own homegrown Southern accent. “We were climbing on Laurel Knob and had to walk off the top.” She waited.

“We have to walk to Panthertown Campground,” I continued. “We’re not sure how to get there.” The dogs growled at our feet, glaring with beady eyes.

“Take a rhaight out tha draive,” she said. “The road’ll wind up ‘n down and hit tha big road after a l’il bit. Thas what you wanna take to Painthertown.”

“What did she just say?” Tobey whispered.

“’Bout how far is that?” I asked, hoping to score a ride.

We jumped, not realizing that she was calling in her dogs. They churned back inside, and she closed the door.

Shut down. We walked back into the rain.

We eventually found “the big road” and, trusting our gut, turned right and plodded quietly for several hours. As Tobey and I limped the last mile to the campground, footsore and soaked, we faced another six-mile round trip to retrieve the packs.

The truck cab was locked, but we pulled the window outward with a nut tool, held it open with a small cam, and fished the lock up with a wired Stopper. We pulled out our extra shoes, sucked down the leftovers of a bag of pretzels, and trudged back out into the rain. By the time we returned with the packs, it was 3 a.m. I broke the silence.

We opened the camper shell and crawled into our sleeping bags for a few hours of rest before the long drive home. The truck grew silent for a few minutes. In the darkness, Tobey spoke up.

“I guess we did end up hiking.”

Nathan Fry lives with his wife and children in El Paso, Texas.

Also read My Epic: Never Back Down (Unless You’re Trad Climbing)