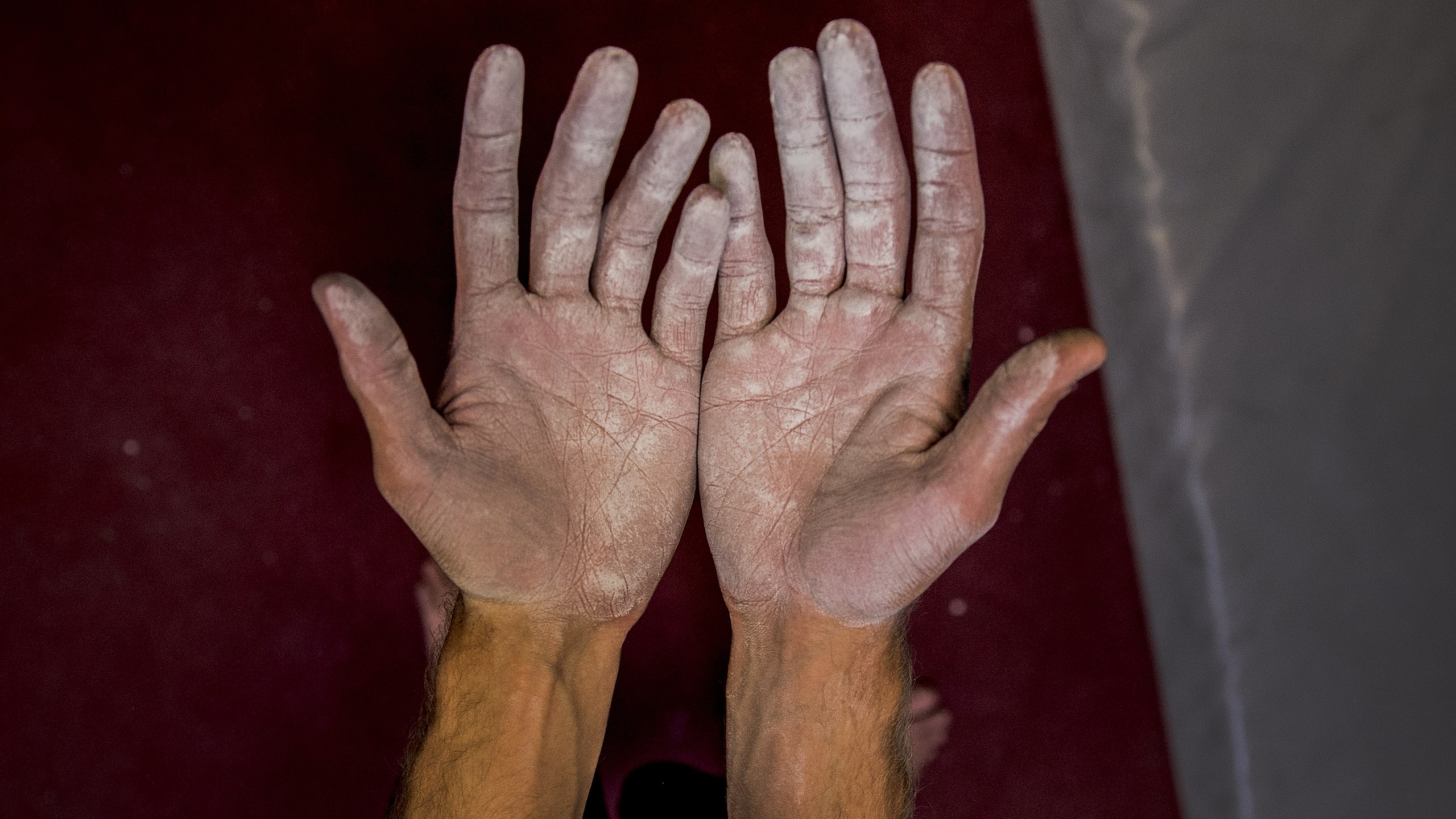 I smiled as the familiar scent of chalk and climbing rubber greeted me. After a full day teaching kindergarten, followed by three hours in a graduate-school
course, I was ready to climb.

A 14-foot freestanding boulder loomed in the center of the gym. Climbers could boulder around the outside or pass through an archway that led inside to
more problems. I warmed up on the outside walls

wandering into the interior, and spotted a new V3, fingery and technical, catering to my strengths.

The line ended with two miserable crimps and a big move to the finish. I bouldered up, latched the heinous left-hand crimp and set my feet. For me at 5’
2”, it wasn’t just a jump—it was a launch. I hit the top with several fingers, but out of control.

My body kept swinging, too fiercely for me to hold on. I sailed through the air, as I have many times in the gym, and felt an impact, but no pain right
away. My forehead seemed to hit the padded floor much faster than I thought it would, however. The whole collision felt eerily sudden, as though something
had given out. Something was wrong. I stood up quickly, and my left arm swung up, hitting me in the face.

I looked down in horror. My left arm was hyperextended, pointing the wrong way at the elbow. A nearby climber ran to call an ambulance. I muttered some
expletives, but remained fairly calm as I lay down on the nearest crash pad and struggled to pull my climbing shoes off with one hand. Other climbers
surrounded me, helped remove my shoes, and held ice on my arm, coaxing me to take deep breaths.

They asked what I needed and I told them, “My friends.”

Someone put my cell phone to my ear, and within minutes Claudia Lee, Bill Campbell and Rachel Thiel were on the way.

The ambulance arrived within 15 minutes, and the medics approached me delicately. Searing pain was now shooting through me and I cried silently, bracing
my feet on the climbing wall. I hobbled out of the gym, tears running down my face, my bent arm supported by a pillow and two medics.

As they ushered me into the back of the ambulance, Rachel said firmly, “I’m coming with her.” The medics nodded, and she hopped into the front seat. I
was comforted to know she was near.

At the hospital, I was amazed at how fast everyone worked. A gentle-faced man in brightly patterned scrubs told me he was there to
take my x-rays. My arm was massively swollen, with a freaky bruised line running inside my elbow. My left hand was still covered in climbing chalk.

He looked at me, smiled and said, “This is going to be uncomfortable, but I’ll do my best. What is your name?” “Jen,” I said, smiling. It was easy to feel
lost in the chaos of the situation. So many health-care providers were in and out of my room, each one caring but efficient and busy. Did anyone know
what this injury meant for me? How hard I’d worked to get to my level of climbing? Somehow when he asked my name, I felt more like myself.

As I waited with my friends, a nurse came in with a damp cloth and gently wiped the mascara streaks off my cheeks.

The x-rays confirmed a severe posterior elbow dislocation. OK. Surely all I needed was my arm to be put back in place.

The physician’s assistant and two nurses set my arm. Thanks to sedation I missed that part: In one moment they were asking my friends to leave the room,
and in the next my arm was wrapped and resting in the appropriate anatomical direction.

“Can you squeeze my hand?” he asked.

I struggled. Two of my fingers wouldn’t move at all. This was the first moment I became very scared. What was happening to me? Was this permanent? Dr.
Callaway called in the vascular surgeon.

Dr. Bobby Mendes was warm and demonstrative. He talked to me about climbing, and then he, too, asked me to squeeze his hand.

My fingers remained still. He said, “Now, I know you’re a rock climber. You should be able to squeeze my hand a lot harder than that.”

I said, “I’ll squeeze with my right hand!”

Dr. Mendes laughed. He explained that most likely there was a partial tear in the vasculature and that blood thinners could rebuild the flow to my hand.
He also told me that if the tear was more severe, he would have to operate. Everyone seemed pretty sure that if there was a tear, it would be minimal,
reparable.

Not long after, Dr. Mendes woke me up from the angiogram, his tone completely changed, serious now.

I started crying. How would my parents find out? How bad was this? What about climbing?

Dr. Mendes and a team of nurses called my parents to tell them I was going into surgery. They explained to my father that there was a lack of blood flow
to my hand and that the chances of repair were good. Then Dr. Mendes passed me the phone. I blubbered out mumbly sobs. My dad told me that I was in
good hands and that he was proud of me. He put my mom on the phone, and she told me she loved me. I passed my phone off and when I looked up, all three
nurses were crying. They told me they would be my moms for the night and that they would take care of me.

Seven hours later, I woke up in the ICU. Claudia sat vigil at my bedside, beeping monitors around us. I peered immediately down my left side, unsure of
what I would find. Or not find. I saw my arm. My hand. All five fingers. My arm was wrapped in a cast and gauze from shoulder to wrist, but it was
there.

From what I hear, the degree of damage was astounding. They didn’t just discover a tear. I had severed almost everything, including my brachial artery,
but not my nerve. The clock was racing as to what parts of my arm, hand and fingers would be saved. The repairs were long and extensive and involved
essentially reattaching my arm from the inside. An entire vascular and orthopedic team fought for me and I am incredibly fortunate to have had them.
It is because of them that I have my arm.

When Dr. Mendes arrived in the ICU the next morning, he smiled. “The first thing you asked when you woke up,” he said, “was, ‘When can I climb?’ I looked
at you and said, ‘Girl, I just saved your fingers!’”

We laughed. He said honestly, “With the fight I see in you, there is no reason you can’t climb again.”

It has been three years since my fall in the gym, and my doctors are still astonished at the injuries I sustained but by my recovery as well. Dr. Mendes was right—I
could climb again. And I do, as often as I can. I have some extension and flexion issues, some nerve damage. My left arm will never quite function
the way it did. But it’s even stronger than it was before the accident. As am I. And I’m grateful for all of it.

Jennifer Nicely lives in Tampa, Florida, and works as a kindergarten teacher. She climbs as much as possible and is proud to say that she can do six chin-ups, crooked arm and all.

My Epic: Ignoring the Warnings