I’ve been fiddling with a self-release knot that lets you rappel on a single rope, then shake the rope to release the knot at the anchor and retrieve the rope. I’ve heard of old alpine guides using such a knot, but I can’t find it in any books. Do you know of this knot or can you recommend another self-release knot? 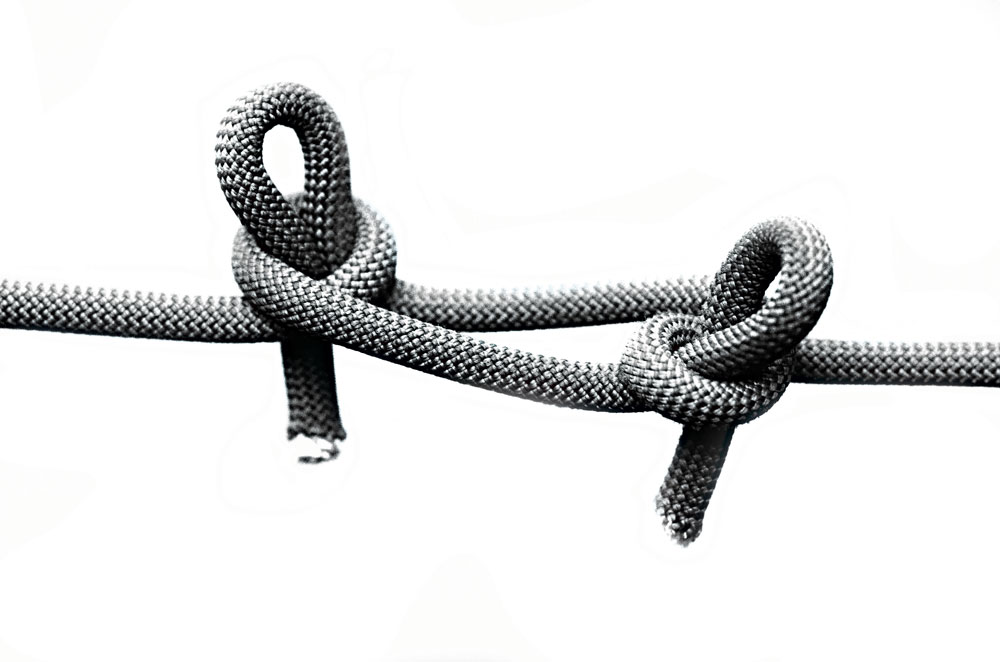 You mean besides the bowline?

I suspect you are a Bear Grylls fan and watched “Man vs. Wild,” Season Three, Episode Three, where he demonstrated the “Kamikaze” knot, a variation on
the sheepshank where you cut the center strand of the knot.

That’s right, you cut your rope. I am a student of onomastics, so pay careful attention to the meaning of names. Knowing what is behind a name
can take on great importance. Ignore at your own peril. “Kamikaze” as applied to a knot tells me all I need to know, just as I know I’d probably not
open a text message from Anthony Weiner, and wouldn’t mind being stranded on a ledge with Jenny Humpsalot.

Anyway, in “Man vs. Wild,” Bear demonstrates the Kamikaze knot by tying off a single line and rappelling. Once on the ground, he shakes the rope and voila, it
falls to his feet. On TV the knot seems to work even if Bear does squeal like a ninny at the thought of the Kamikaze coming unraveled while he is mid-rappel.
Though widely considered a fraud, Grylls did in another episode squeeze the juice from a pile of elephant dung and drink it on camera. He also climbed
Everest in 1988, the youngest Brit to do so at the time—if you don’t count the Brit who did it when he was a year younger.

If you drink pachyderm poop water, using the Kamikaze knot might seem reasonable, even sane. Otherwise, the knot has no application for climbers. It might
be good for the Japanese art of Kinbaku. Don’t know.

If I were you I’d give up my fascination with the self-release knot. The only climber I have known who experimented with this knot, died. For real. There
are, of course, times when you need to rappel the full length of a rope and retrieve it. For those instances, carry two ropes and enough anchor material
to build additional stations if necessary. Rappelling is dangerous enough without gleaning your tips from some TV punk poser. Next!

This article originally appeared in Rock and Ice issue 215 (January 2014).