A friend had her rope flaked out at the base of a route, and a 150-pound rock rolled down the hillside and landed on it. The rope didn’t appear damaged, but she threw it away just in case. I fished it out of the trash and am leading on it. Should I be concerned? 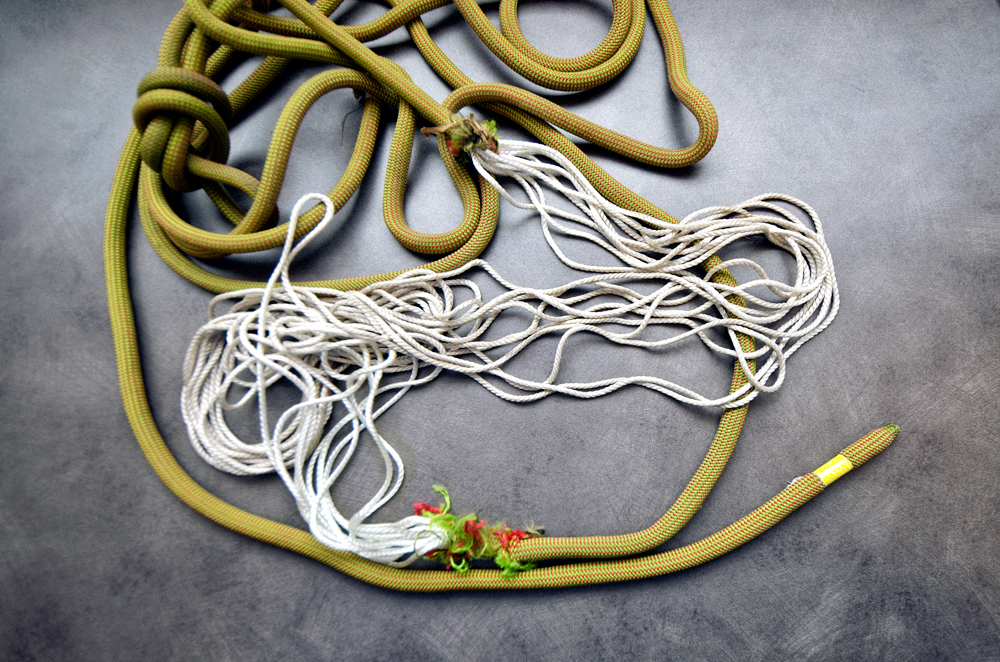 Dumpsters are one of my happy hunting grounds. I have pulled out chairs
and bags of topsoil, and other people luckier than me have scored winning lottery tickets and ancient Mayan artifacts. But a rope?

I can’t believe you are even asking whether you should use it. If you found medicine in the dumpster, would you take it?

I do get tired of all the “safety” people always saying: “If you have to ask whether a rope or any piece of gear is reliable, you should
replace it.” I don’t want to pile on because if I threw away every piece of my gear that someone called questionable I’d be reduced
to free soloing, but I do suggest erring on the side of caution when we’re talking about lifelines. You didn’t see the block hit the rope and your
friend did, and apparently she was rattled enough by the incident to get another rope.

Before you climb on any rope you should inspect it for two types of damage. Cuts, abrasions and melted spots on the sheath are obvious trauma. All ropes
will develop “peach fuzz” but don’t worry about that. You are looking for contusions and the like that will compromise the rope’s strength. Examine
every inch of the cord and run it through your hands, squeezing and bending to feel for bad spots that your eyes might have missed.

The above is the standard check. For a “full physical,” clip the rope through a bolt or piece of gear about head high, and “saw” the rope back and forth
through a carabiner. Pull the rope hard and feel for irregularities. If the rope checks out fine, rappel on it and again feel for odd spots.

Your question does beg whether a rope can have damage that is undetectable to the eye and hand. We know that chemicals such as battery acid and solvents
can cause “invisible” damage, but can actual physical damage go unnoticed?

I don’t know, so I posed the question to John Branagan at Sterling Ropes. “It is improbable that the rope sustained damage that you can’t see or feel,”
says Branagan, “but not impossible and the only sure way to know if the rope has core damage is to cut off the entire sheath and examine the core fibers
under a microscope, which is like drowning a witch to see if she was a witch—if she dies, she wasn’t a witch.

“The rope is probably fine,” says Branagan, “but next time you go for a dyno or a move you might fall on, do you want any doubt in your mind? And if the
rope breaks, you don’t get a second chance.”

To answer your question, you should be concerned. Use the rope, just not for climbing. Tow cars with it. Make it into bullwhips or dog leashes or weave
it into a nice throw rug. Next!

This article was published in Rock and Ice issue 204 (September 2012).