How tight should I wrench down a bolt? —gertyb via rockandice.com

Every bolt has its recommended torque, often stated as “maximum torque.” For a bolt to achieve its published shear (straight-down pull)
and tensile (straight-out pull) strengths, the bolt must be torqued to its value stated in foot pounds. Under torquing and over torquing will compromise
the bolt.

Hundreds of thousands of bolts have been placed, and almost none have been torqued down with a torque wrench—a wrench that tells you in foot-pounds
precisely how much tension the bolt is under. Yet we don’t see bolts failing due to being over or under tightened. Why?

New routers typically use a six- or eight-inch wrench. These tools naturally limit how tight you can get a bolt. Most people probably tighten bolts to
a point where the bolt feels quite tight, with the wrench painfully digging into your hand. At 30 foot-pounds the wrench (open-end, box-end and adjustable)
tends to skip off the bolt and you rake your knuckles across the rock. My guess is that most bolts have been torqued to 20 to 25 foot-pounds. (You
can get more torque with a socket wrench, and potentially over-tighten 3/8-inch and smaller bolts. For that reason, don’t use a socket on bolts smaller
than 1/2-inch diameter. My comments below only pertain to using an adjustable “crescent,” or open-end or box-end wrench.) 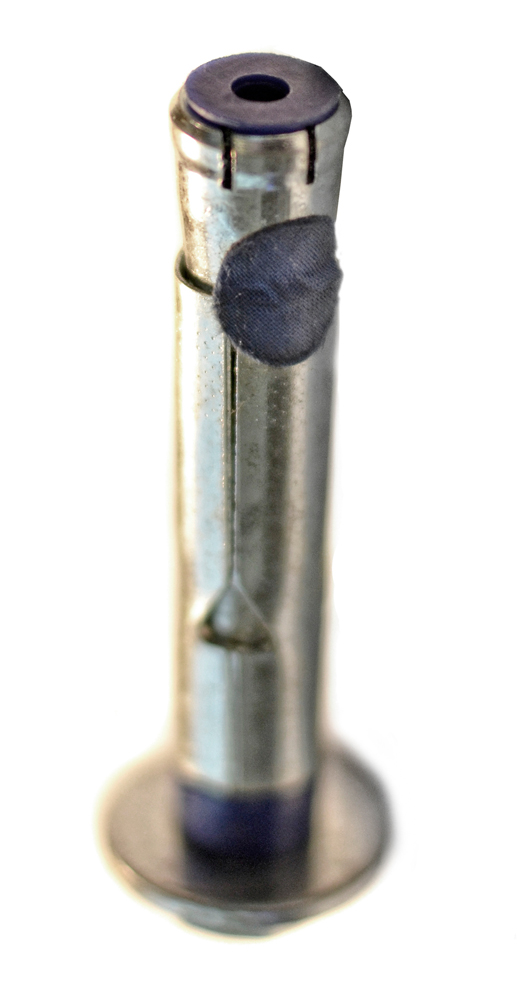 The Powers Powerbolt (five-piece) in 3/8-inch diameter, carbon-steel, is rated with a maximum torque of 25 foot-pounds, so most of
these are likely being placed close to the recommendation. The recommended torque on a 1/2-inch carbon-steel bolt is 45 foot-pounds, an impossibility
with a short wrench and hard to do even with a socket wrench and a breaker bar on the handle. Therefore we may presume most 1/2-inch bolts are under
tightened. That this hasn’t been a problem (i.e., no known accidents) is probably due to the fact that a 1/2-inch bolt in concrete is rated to close
to 10,000 pounds in shear and tensile strengths—in effect, the bolt’s strength is such overkill it gives us a good margin for placement error.
The same bolt in stainless steel has a rating of 25 foot-pounds; people using this bolt are likely placing it to specification.

The 3/8-inch-diameter Powers Powerstud is another common climbing bolt, usually used in granite. This bolt can be stabbed into the hole with one hand (in
contrast to the Power-bolt, which requires two hands) and is about half the price. Also it is available in generic versions at most hardware stores;
however, the off-brand versions are highly suspect.

The 3/8-inch Powerstud has a recommended torque value of 20 foot-pounds—most people are probably placing this bolt close to its rating. However,
it is possible to over torque the Powerstud and compromise its strength. With a long wrench and effort you can snap the bolt’s head.

Other common bolts are from Fixe Hardware. The 12mm Triplex, basically a simplified version of the Powerbolt, has a torque rating of 25 foot-pounds, so
most people are probably placing this one correctly. I have used and really like the Fixe Wedge, a better version of the Powerstud. The 3/8-inch Wedge
Bolt has a recommended torque of 25 foot-pounds and the 12mm version has a torque value of 44 foot- pounds. Again, it’s easy to get the 3/8-inch bolt
right, but we’re all likely under torquing the 12mm version. Kevin Daniels of Fixe recommends always using a torque wrench on any bolt larger than
3/8-inch diameter and cranking the bolt down to specification.

I agree with Daniels. A torque wrench costs around $40. As a rule, use a torque wrench on 1/2-inch bolts. To get a feel for how tight you should place
3/8-inch bolts, wrench them down using the torque wrench—just a handful of tests will reveal how tight they should feel.

Should I use the washer on a bolt? —LK via rockandice.com

I have heard the argument that the bolt hanger itself acts as a washer. This is logical, but if any bolted-down object acts as its own
washer, you would never need a washer in any application. Powers Fasteners says you should always use the washer, that bolts are engineered to work
together as a unit. Aside from that legalese, the washer serves several other purposes.

1) If the bolt hole is a larger diameter than the bolt, the washer bridges the difference, although only to a small degree, and you should always mate
the hanger to the diameter of the bolt.

2) The washer distributes the pressure of the nut or bolt head across the hanger. This is germane since when you drill the hole it is impossible to hold
the drill perfectly perpendicular to the rock. A crooked bolt will load the hanger unevenly. Whether this is a big deal or not is untested and even
though bolt hangers are the strongest link in the protection chain—carabiners break before hangers fail—play it safe and use the washer.

I use the wedge-type bolt and the nut works loose and the hanger spins. Can I use a lock washer to prevent spinners? —josepbolter
via rockandice.com

Unknown. A lock washer could act as a spring keeping constant tension on the hanger, preventing it from loosening, but a properly placed
and torqued bolt should not have its nut work loose. Lock washers are typically used on bolts that are subjected to vibration, such as the starter
motor on your car. Climbing bolts do not undergo vibration. They are subjected to dynamic loading when you fall, and static loading when you hang on
them and by other actions such as temperature, but unless the bolt is in a highway overpass it won’t encounter vibration. Your situation where the
nut is working loose is likely the result of not cranking the bolt down tightly enough and/or the hanger isn’t seating and gripping the rock.

Also look out for routes that dogleg—the mechanics of a rope pulling obliquely on the bolt at the traverse point can sometimes work the nut loose
over time; more torque would likely solve the problem. Get a torque wrench, tighten the bolt to spec, and clean away any gravel or debris under the
hanger so it can sit flush and tight. If after those steps the nut still works loose, Daniels of Fixe recommends securing the nut with a few drops
of Loctite.

Is there a big difference between stain- less-steel studs (bolts), and zinc-coated ones? Does a dry climate like the Rockies reduce rusting more than a wet climate? —Emily Stifler, Bozeman, Montana

Stainless-Steel bolts cost two to four times that of a zinc-plated carbon-steel bolt so you are smart to consider whether you need stainless
steel. In relatively dry climates that don’t have a marine (salt) environment, zinc-plated bolts are fine. In the Rockies of Colorado I am still clipping
zinc-plated bolts I placed over 20 years ago and they look like they can easily last another two decades. (I’ve unscrewed a few and examined their
internal workings and they checked out.)

My friend “DP” over at Rifle however, has reported that plated bolts in that soft, weepy limestone crag do tend to rust out if placed in the wetter sections.
In that situation, stainless steel would be a good choice.

Other times to choose stainless steel, or better yet, titanium, would be for use at any coastal crag (Maine and Thailand, for examples) and any place that
is often wet, such as certain crags in the Pacific Northwest. Powers Fasteners offers their bolts in stainless and Fixe goes one better by serving
up their bolts in “marine”-grade stainless specifically for corrosive environments.

Always use a stainless-steel washer and hanger with any stainless bolt. Mis-matching metals (a zinc-plated hanger on a stainless bolt, for example) can
cause galvanic corrosion, an electrochemical action that accelerates corrosion. Gear Guy has spoken!

Like the old saying goes, it’s not the meat, it’s the motion. The meat in this case
is bolt diameter, and the motion is either straight-out loading (tension) or straight down (shear). Shear loading, such as you’d get on a less-than-vert
wall, tests the bolt shaft’s breaking (shear) strength. Tension loading, such as you’d get with a bolt placed in a roof, tests its pull-out strength.

Forget about shear loading, a good, commonly used bolt such as the Powers PowerBolt and its ilk will not break. A 3/8-inch bolt of this type is rated to
7,000 pounds in 6,000 psi concrete (basically granite) and 4,000 pounds in 2,000 psi concrete (hard sandstone). This is roughly the breaking strength
range of carabiners and much higher than any rope’s maximum possible impact force. Scaling up your bolt to 1/2-inch using the premise that a 3/8-bolt
could break is like carrying wood into a forest.

Tensile strength is another matter, since bolts can and do pull out, especially in softer rock, although in hard rock a 3/8-inch PowerBolt’s tensile strength
still exceeds that of the gear you’d clip to it. If, however, the rock is anything less than bullet, the superior holding power of a 1/2-inch bolt,
which can be 50 percent higher than that of a 3/8-inch bolt, is worth the extra money and effort.

Bear in mind that a bolt, regardless of its size, can pull out due to improper placement, such as under-tightening the bolt, not cleaning the hole, and
letting the bit wallow and oversize the hole, a properly set 3/8-inch bolt is likely stronger in tension than a badly placed 1/2-inch bolt.

Bolt length is the final consideration, and this is driven entirely by rock hardness or lack of it. In granite, a 2-inch-long bolt is, for practical purposes,
as strong as a 3 1/2-inch-long bolt because both are overkill. Might as well go short there. In softer rock, a longer bolt is stronger (up to twice
as strong) in tensile strength, and therefore more desirable, although in really soft rock the only bolts that hold are glue-ins and their 1/2-inch
diameter will always win simply because there’s more glue in the hole to reinforce the rock and distribute the load better.

The Trouble With Glue-In Bolts

How to Remove an Old Bolt