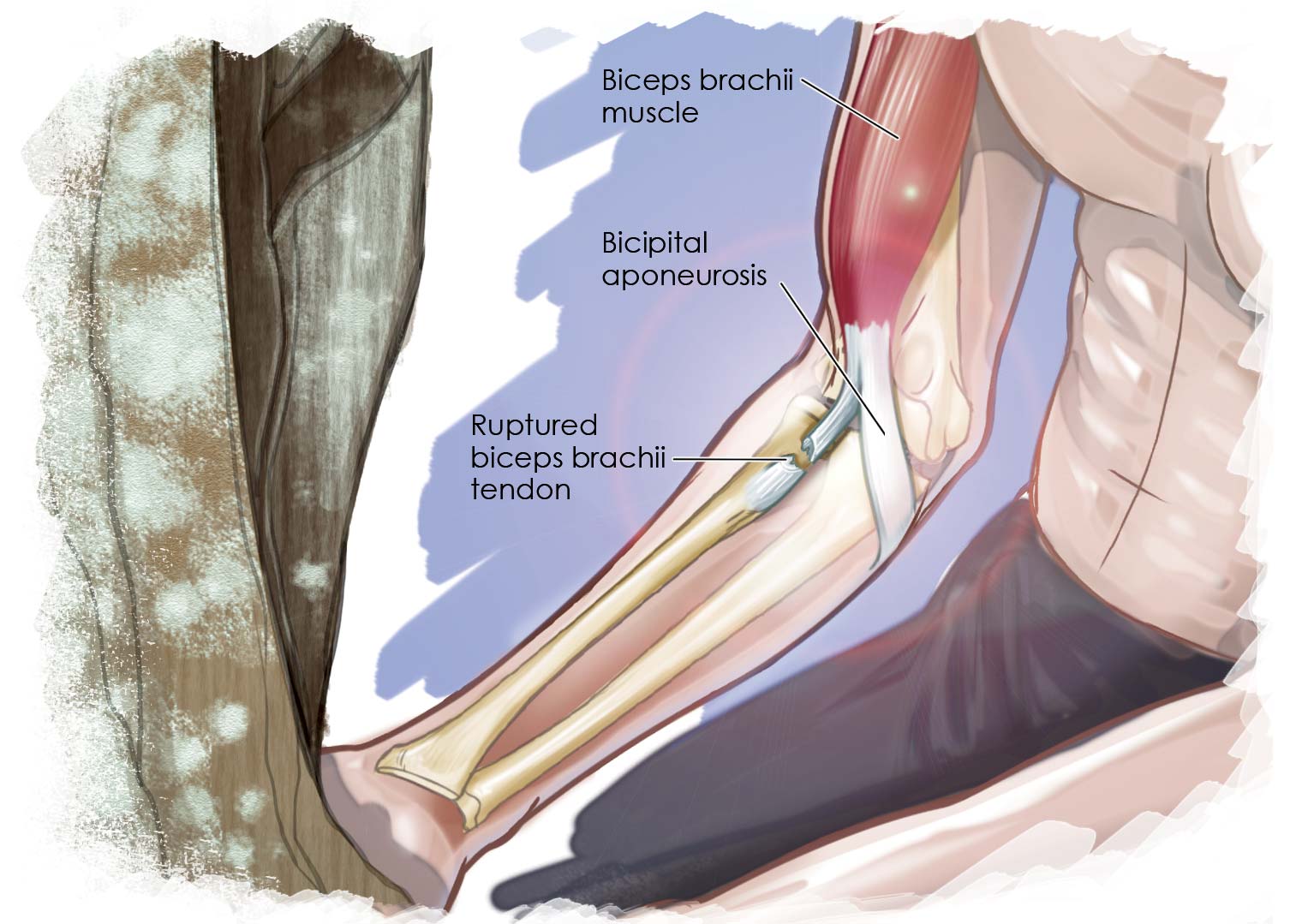 I was on a route yesterday where I had a four-finger undercling with my right hand. As I put all my weight onto it to reach the next hold, I heard a snapping sound and felt something similar to an electric shock in my right forearm and bicep. There was no immediate pain, but today my arm is sore when I bend the elbow to 45 degrees, make a fist and/or extend the wrist and pronate. The pain travels along the inside and top of my forearm and my bicep feels soft even when contracted.

Oh dear, an actual injury. That you have damaged the bicep insertion is fairly apparent, although there are a couple of other possibilities.

The insertion of the bicep is quite complex at the elbow. One part (the strongest) attaches to the radius; the other is a fascial attachment called the
bicipital aponeurosis. You can tear either of these points, but are more likely to rupture the radial insertion.

The Hook Test will give you a solid indication as to whether the tendon is fully ruptured. On the good arm and with the elbow
flexed to 90 degrees, find the tendon that sits below the muscle and runs into the front of the elbow (it is about the width of a pen). Hook your finger
around it and get a good sense of what it feels like. Now try it on the injured side. If the radial side is ruptured but the aponeurosis is intact,
the tendon will feel thinner and be positioned slightly closer to the inside of the elbow (if you are looking straight down your arm), and the bicep
will be only mildly bunched compared to the good side. If both are ruptured, the tendon will be absent and the bicep will have recoiled up the arm
toward the shoulder and look like someone stuffed a tennis ball in there.

In your case, since the bicep is still able to shorten in a roughly symmetrical manner, the injury is almost certainly not a full rupture of both points.
However, the fact that the bicep won’t firm up when contracted is a clear indication that all is not well.

If you have a rupture of the radial insertion, you will only have a mild loss of strength when flexing your bicep since elbow flexion, contrary to popular
belief, is not the bicep’s role. The brachialis muscle that sits beneath the bicep is the prime mover of elbow flexion, inadvertently lifting the bicep
to aesthetic glory.

The role of the bicep is primarily to supinate the forearm, such as when you flip someone the bird. Your brachialis bends your elbow, and your bicep turns
your forearm so that your middle finger sticks suitably skyward.

Get a specialist’s opinion, and fast. Delay can reduce the chances of a successful reattachment by way of tendon retraction and scarring.