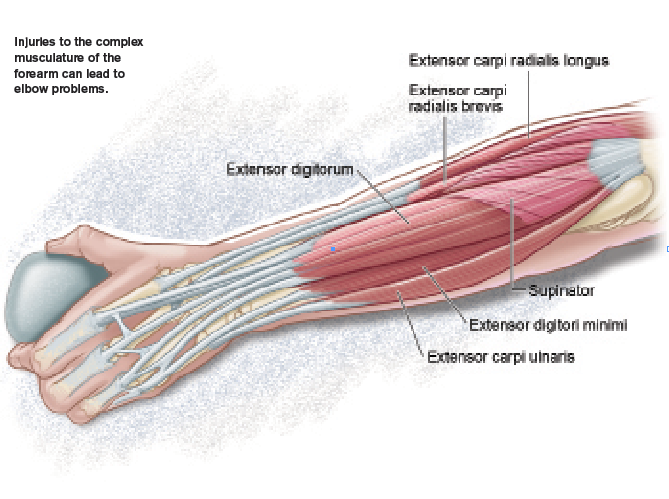 Last
fall I injured the supinator muscle in my right arm slightly while climbing. This led to radial nerve impingement. A couple months off and physical
therapy took care of the problem. But while I was in pain from the injury, I had to continue working, which involves a lot of laptop time. I am not
sure how—whether from compensating or just coincidentally—but I gradually started having elbow pain on the outside of my elbow. A doctor
administered a cortisone shot, which took the pain away completely. My arm was weaker but I was able to climb without pain for several months. Now
I’ve had pain again for a couple months with some specific movements, such as pinching a tube of chapstick, picking up a frying pan, or trying to side-pull
on a high hold. —Lena1 / rockandice.com forum

That you have elbow tendonosis is fairly apparent. Whether it afflicts the supinator or one of the extensors is up for debate. However, administering cortisone is not only nonsense, it is thoroughly debunked nonsense. I’ll go handbags at 10 paces with anyone who says otherwise.

You need some testing on your elbow to decide which tendon is afflicted. Have a read of the “Dodgy Elbows” article in No. 156 or see it on drjuliansaunders.com. In terms of testing, pay particular attention to the angle of your elbow. Start with your elbow straight and test every 30 degrees or so, until it is fully flexed. Go through the eccentric testing protocol for the exercise shown in the Frying Pan Sessions video recently described in No. 201 (also on my web page). Additionally, test the supinator by holding the frying pan vertically and letting it slowly fall into pronation. Again, start with your elbow straight and test through the whole range. You are your own little barometer of effectiveness, and pain is the measurement of success. Pick the worst angle and do three sets of eight to 10 reps morning and night, every other day.