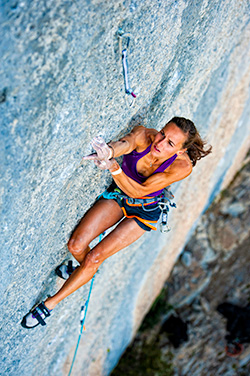 A year ago I injured my middle finger on my left hand, rupturing my flexor digitorum superficialis. Now I can’t make the crimp position with that finger. The specialist said any surgery would be a shot in the dark and involve a tendon graft and months of rehab, which my insurance would not cover. The therapist told me I could begin climbing again as long as I took it slowly. After much work, I can now boulder V4/5 again. Outside of climbing and trying to play guitar, it doesn’t affect my life much. I finally have decent insurance so I’m wondering if there is something I should try.

Wow. You are what we doctors call interesting—that special blend of amazing and unfortunate. At least you can recalibrate to be a left-handed guitarist. Did you know that 60 percent of dominant-hand dexterity is automatically transferred to your other hand without any training? Halfway there! Well done. I am not surprised you got kicked around the medical stables like an unrideable brumby. I have never seen your injury either. But it is difficult to argue with an MRI and that you can’t assume the crimp position. Flexor digitorum profundis is the prime mover for finger flexion, not superficialis. Although you will lose some functional coordination of the finger (which will mess more with your plucking than your pulling), strength will be much less affected.

The advice you have received thus far is very good. Surgery is a poor option, albeit the only one if you want to regain capacity with this finger. With regard to climbing, the surgical outcome is a gamble for which I would not be so brazen to give odds. Much of injury rehab, however, is dependent on the patient. The medical establishment can be more apocalyptic than the Mayan calendar. Likely outcomes, or even what might be possible given good conditions, are at times discussed in much less detail. The likely worst possible outcome for your finger is that the operation fails and you have some additional scar tissue. The likely best-case scenario is that you get an almost fully functional finger. I wouldn’t steer you toward surgery, but I would recommend discussing it with a few different surgeons. Otherwise, become an open-hand aficionado. Forget Hueco. Go to Horsepens, Font and Castle Hill. Become a sloper snob!