I’m 28 and have sport climbed for 10 years. I push myself hard but have taken most of the last year off. Since April 2010 I have been experiencing degrees of pain in the base of my thumbs—mostly my right thumb. I’ve talked with two hand specialists and X-rays indicate that the joint spacing in my hand is good, but I was told that I am developing arthritis and should quit climbing. If it seems like it is arthritis, is there a way to be sure, and what is the next course of action?

Our opposable thumbs rather than our intellect differentiate us from the mass of the animal kingdom. As a result the joint suffers considerably by way
of wear and tear, and is typically the first joint to succumb to arthritis. That said, gee whiz, you’re a bit young for age-related dilapidation!

A few metabolic disorders, such as gout, can cause the formation of crystals inside the joint, resulting in arthritis. These, however, tend to involve
more intense relapsing and remitting pain as well as considerable inflammation, none of which you have mentioned. 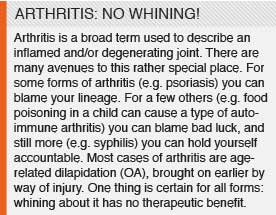 In all likelihood your doc is on the money with his or her estimate of the situation, at least from a conservative perspective, i.e. the likely worst-case
scenario is early stage osteoarthritis (OA). It is more common to see signs of joint degeneration such as a narrowed joint space or bone spurs by the
time you feel the symptoms, but that is not always the case.

An Australian climber, “John Doe,” who in retrospect was probably the first to onsight 5.14a (5.13d at the time of his ascent), has the thumb dimensions
of a button mushroom. I have never seen him use his thumbs since they are of no functional length.

Solution: Don’t do pinches,
drink fish oil like it’s the elixir of life, and traction your thumbs like you are milking a cow’s tits.