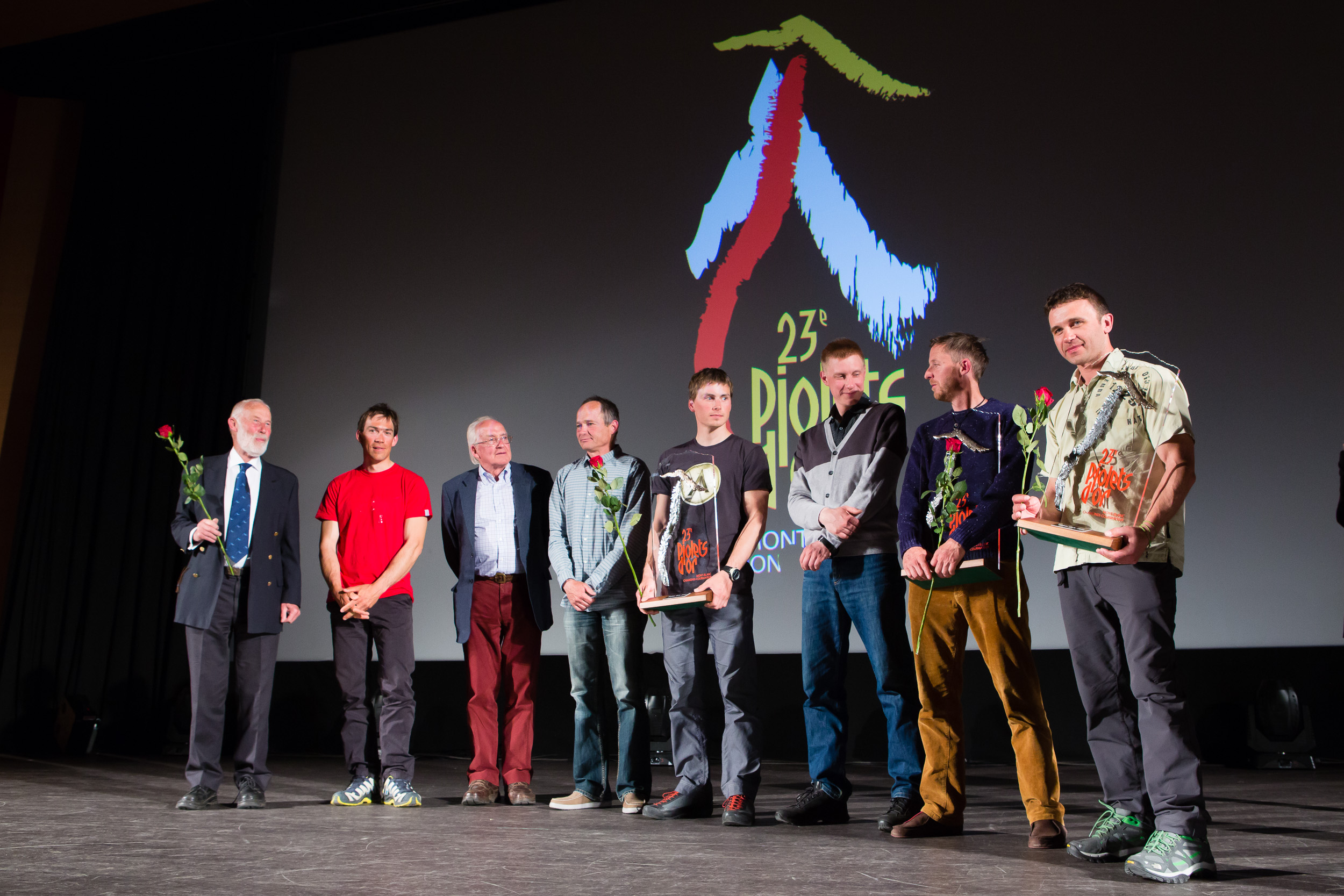 The 23rd annual Piolets d’Or awards seem to have taken a step away from the controversial “competitive” format with a slight change in direction. The awards no longer stress competition in the traditional sense of the word but rather the emphasis is on the festival, a celebration of major past and present ascents carried out by both the rising stars and established alumni of the climbing world. Taking place in the Mont Blanc massifs’ two principle climbing towns, France’s Chamonix and Italy’s Courmayeur, the event provides a platform to bring mountaineering to the attention of the mainstream media, praising the lesser-known achievements of the climbing world.

The biggest hurdle that the event has had to overcome is its elevation of some mountaineering accomplishments over others. As one of this year’s winners, Slovenian alpinist Ales Cesen pointed out, “the issue with the award is how to compare different climbs … I think it is impossible”. That is why, in the words of one of this year’s event organizers Liv Sansov, “semantics are important.” For example, there is an attempt in all press materials to avoid the terms “winners” and “losers” and rather to celebrate the ascents of the past year of alpinism. 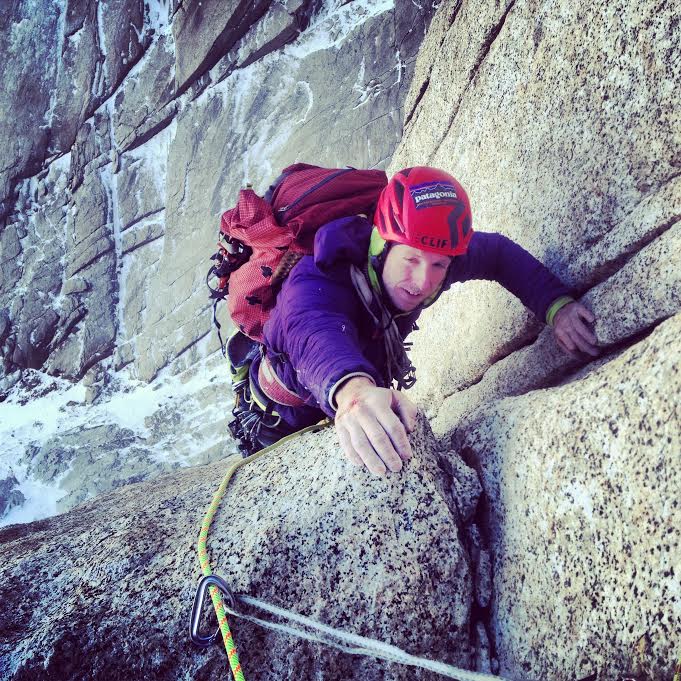 This year the award was given to three separate expeditions. First, Alex Honnold and Tommy Caldwell were honored for their surprising, well-executed jaunt into world of alpinism with their rapid traverse of the enormous Fitzroy skyline in Patagonia. Also rewarded were Slovenian alpinists Luka Lindic, Ales Cesen and Marko Prezelj for making the first ascent of the north face of Hagshu in the Kishtwar range of India’s Himalaya, and Aleksander Gukov and Aleksey Lonchinsky of Russia, for the first ascent of the southwest face of Nepal’s 6183m Thamserku.

2015 is also the 7th awarding of the career Piolet d’or for outstanding contribution to the world of climbing and alpinism. Following in the footsteps of such revered figures as Walter Bonatti, Reinhold Messner and Doug Scott came the not-in-the-least-bit surprising decision to give the award to British alpinist Sir Chris Bonington. Bonington’s contribution to mountaineering is as far reaching as nearly any other with first ascents ranging from the Central Tower of Paine in Patagonia, the Central Pillar of Freney on Mont Blanc, the south face of Annapurna and the first ascent of the southwest face of Everest. He is also a respected author and journalist with many books documenting his trips and expeditions as well as aggregating those of others to provide sources of information and inspiration for future generations. Bonington was clearly touched to have received the award from his peers and, despite calling age “a pig,” he is still climbing today, with ascents of the Old Man of Hoy in Scotland at the age of eighty and a recent sport-climbing holiday to Catalonia in Spain. 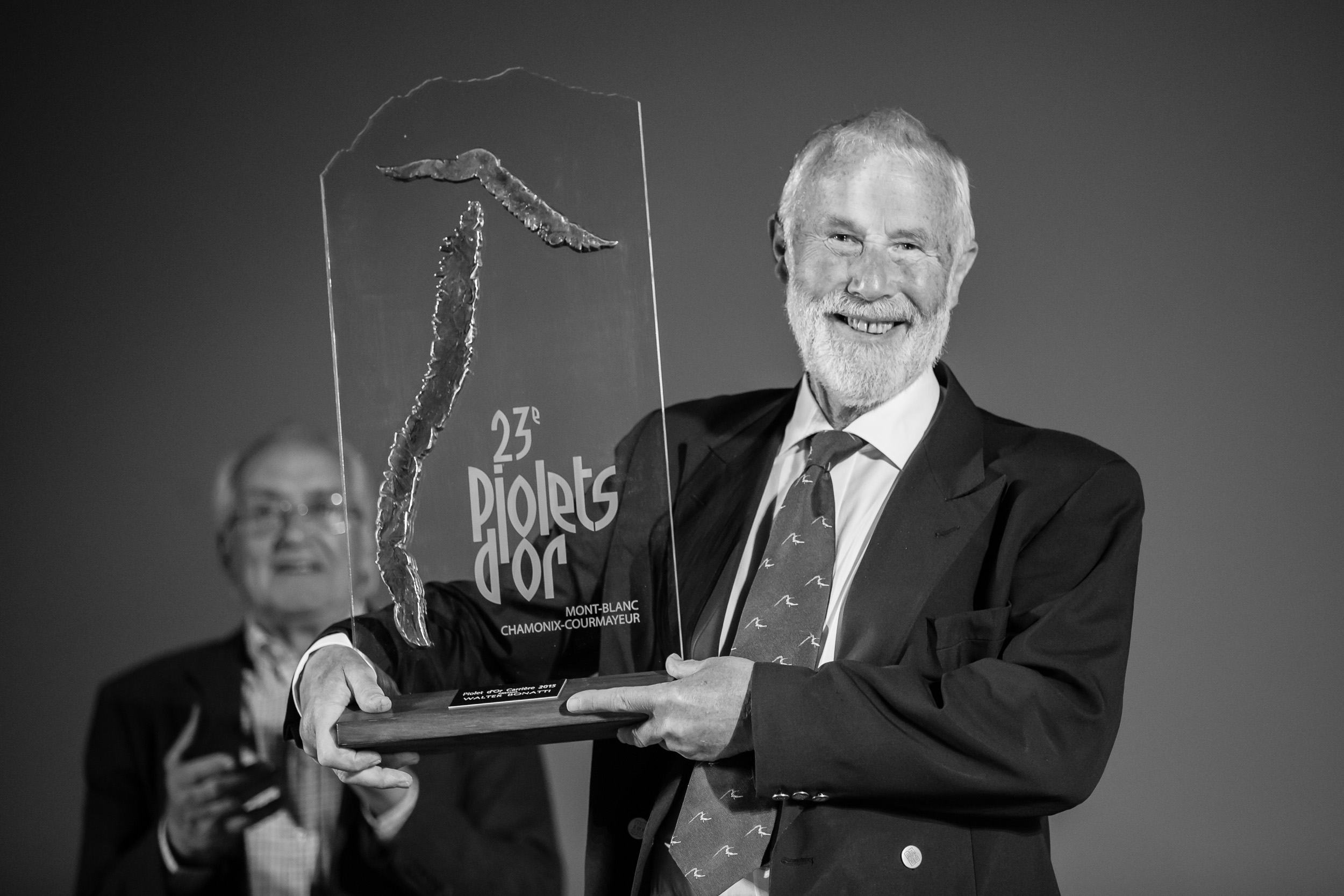 The awarding of the career Piolet d’or was indeed the highlight of the evening and during the opening ceremony Doug Scott and Sir Chris Bonington recounted their extraordinary tale of survival on the Ogre (Baintha Brakk) in the Karakorum. Having reached the summit after achieving some of the most technical climbing ever achieved at such an elevation, Doug Scott broke both of his legs on the very first abseil down. The subsequent descent and recovery is now a historic story of survival where the team were caught in a storm, with no food or water. The tale shone a light into a different age of mountaineering which seems far removed from today’s well-connected, SAT phone-ready world of alpinism.

Following Tommy Caldwell’s on-stage interview about the Fitz traverse, his expedition to Kyrgyzstan—where he was kidnapped by a militant group—was brought to the fore. This led to a more somber closing to the ceremony when the president of the Groupe de Haute Montagne, Christian Trommsdorff, delivered a pertinent and touchig reminder of the losses that mountaineering has suffered at the hands of terrorists in the last few years. With the Nanga Parbat base camp tragedy where 11 mountaineers were executed to the more recent public murder of French mountain guide Hervé Gourdel at the hands of IS, many of our well-known mountain areas are in danger of being ignored by modern alpinists put off by the added risk of extremism. Trommsdorff alluded to the importance of individuals exercising due diligence and caution while visiting potentially dangerous areas and pleaded with the audience not to allow fear to overcome the joy of travel and mountaineering.

Calum Muskett for Rock and Ice

Caldwell, Honnold, Practice Your Speeches for the 2015 Piolet’s d’Or