Tomoa Narasaki and Alban Levier led the field for men’s bouldering, while Jain Kim and Mina Markovic joined a six-way tie for first in
the women’s lead division as the 2016 IFSC Climbing World Championships began today, September 14, in Paris, France. Held every two years, the IFSC
Climbing World Championships is a prestigious, standalone competition separate from the World Cup circuit. The event features 500 of the world’s best
climbers vying for titles in bouldering, lead, speed and paraclimbing. 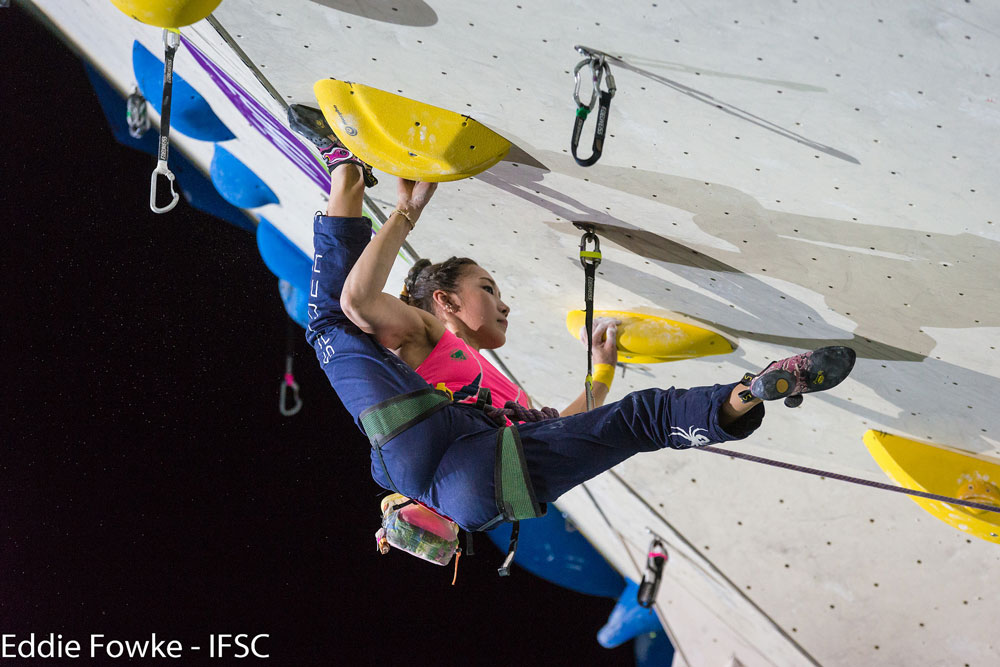 Representing the U.S. at the Championships are the American women Megan Mascarenas,
Claire Buhrfeind, Margo Hayes, Delaney Miller, Kyra Condie, Grace McKeehan, Bimini Horstmann and Suzu Jeffery. Buhrfeind, Hayes and Miller all had
strong showings in the lead qualifications today, earning spots in the semifinal round on Friday. Buhrfiend, Condie and Miller also compete during
the bouldering qualification round tomorrow, September 15, as will the 2016 USA Bouldering National Champion Megan Mascarenas.

On the men’s side, the American climbers Carlo Traversi, Nathaniel Coleman, Shawn Raboutou, Benjamin Hanna and Austin Geiman were eliminated in the bouldering
qualification round earlier today in a highly competitive field. The international stars Adam Ondra and Sean McColl both advanced to the semifinals,
qualifying in 8th and 19th places, respectively. At the 2014 IFSC Climbing World Championships, Ondra stunned the field by winning both the bouldering
and lead titles, the first individual ever to do so in the same year.

Will any of the American women advance to the finals in lead or bouldering? Will Ondra be able to defend his dual titles? Tune in to rockandice.com on
September 16, 17 and 18 for live streaming of the men’s and women’s semifinals and finals to find out.

The competition schedule (all times given in Paris, France time):

Check back at rockandice.com for live streaming and results!