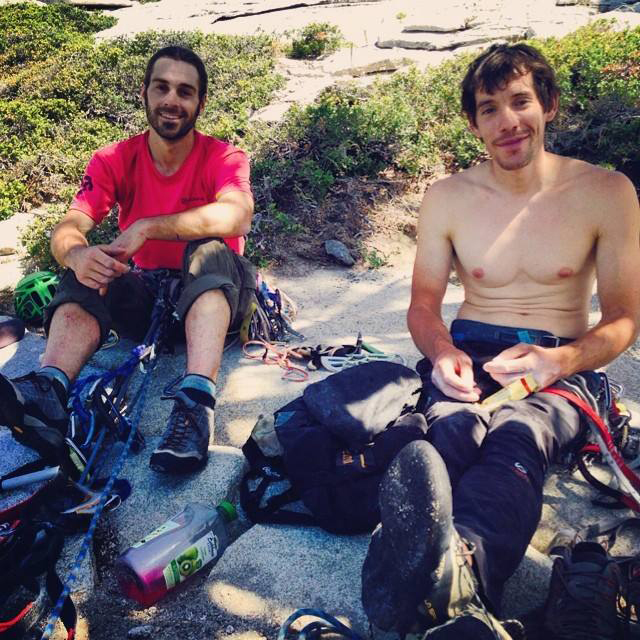 “I got the idea from Ammon McNeely and Ivo Ninov about seven years ago,” Allfrey told Rock and Ice.

Allfrey then proposed the idea to Honnold, who, naturally, was game.

“I didn’t think it would be that hard actually, but it turns out it was pretty tough,” says Honnold. “Basically it was one of those things where your friend has what may or may not be a good idea and you just go with it.”

Waking up at 4:30 a.m. on June 2, Honnold and Allfrey hiked to the base of the Big Stone and took on their hardest route of the week—the rarely repeated New Jersey Turnpike (A4). The pair opted for the El Nino start, which is “mandatory 5.13a A0,” says Allfrey.

After negotiating what Allfrey describes as two “loose, chossy, kind of scary A4 pitches,” the team topped out after 12 hours and 24 minutes, setting the speed record on the route.

After descending nearly 3,000 feet, the team arrived at the Valley floor and settled in for the first of seven “boring” evenings according to Honnold.

“We’d hike down, eat and drink a ton, and go to sleep early,” said Honnold. “Sort of a boring lifestyle, but we didn’t have the energy for anything more exciting.”

During the next six days, Allfrey and Honnold repeated this “lifestyle,” and continued to tick off one big wall route per day. The team spent the next two days setting the speed records for Tangerine Trip (5.9 A3+) and Eagle’s Way (5.8 A3). 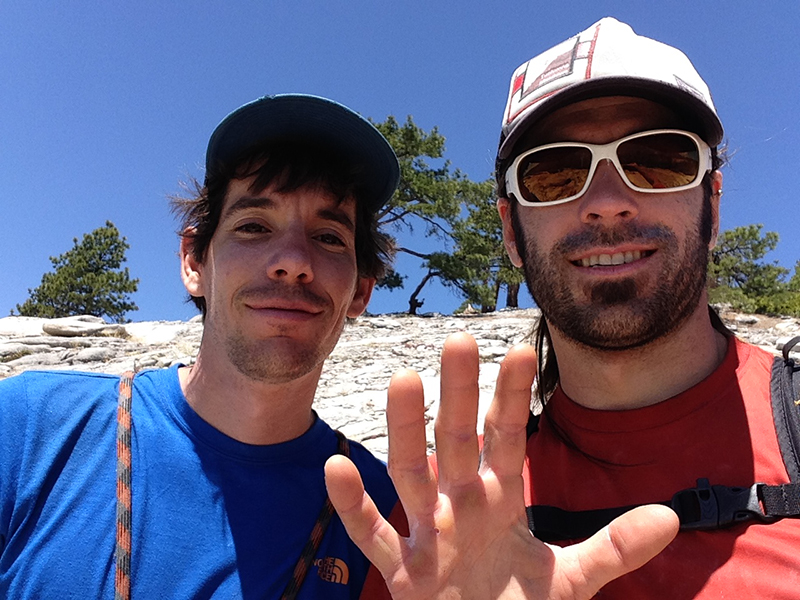 “We forgot my approach shoes one morning [left them at the base by accident],” remembers Honnold. “I did all the jugging on Eagle’s Way in my climbing shoes—which sucked, but wasn’t a huge problem.”

Besides taking a whipper onto a daisy chain, which was “very unpleasant,” Honnold says that the “7 in 7” game went relatively smoothly.

“We just trudged along,” says Honnold.

“We probably could have done more routes if we had wanted to,” added Allfrey. “Don’t get me wrong, we were pooped, but the game we set out to play was 7 in 7.”

When asked if he would consider one-upping the feat, Honnold replied:

“I’m not sure how we would exactly. Of course I’ll want to do harder things in the future, but I definitely wouldn’t want to climb 10 in 7 or something. That would just be boring.”

For now, Honnold says he has other plans.

“It’s been fun, but now that we’re done with the El Cap mission I’m going to become a sport climber again.”