Ralph Tingey calls the climb The Septuagenarian Way. Or jokes that it was done by “two bird brains.”

“Jim, you know, we’re a 140-year-old rope,” he quipped during Tuesday’s ascent by himself and Jim Donini, both age 70, of Bird Brain Boulevard, a historic Grade IV WI 5 in Ouray, Colorado.

Comprised of rock, steep ice, some choss and some moss, the seven-pitch line, a milestone established by Charlie Fowler, Jeff Lowe and Mark Wilford in 1985, demands a full quiver of skills.

Donini, while best known for his alpine legacy in Alaska and Patagonia, had not prepared in particular for ice climbing, having mainly been rock climbing lately, with two trips to Sedona, Arizona. Neither he nor Tingey had ever done the route, though it was on both climbers’ tick lists.

“I climb as much as I can,” the charismatic Donini says. “[The climb] was great. It’s in really good shape. … All of the climbs around here are in great shape.” A preponderance of early-season moisture lodged early in chimneys or on near-sunless walls, staying to create the best ice season in many years.

In an efficient effort, the two did the route in six long pitches. They started at about 7:30 a.m., reached the top at 1:30, and were back at the bottom at 3.

Of Tingey, Donini says, “He spent all those years in Alaska. He’s a damn good ice climber. He’s a good rock climber, too, but I think he’s an even better ice climber.

“He’s a month or two older than I am and climbing really well, but he’s not well-known … There are people out there all over the country like that. We’ve got this little community here of people a certain age that are climbing well.”

Donini’s many hard rock climbs include Overhang Overpass (5.11) and the offwidth Leanie Meanie (5.11) in Yosemite in the early 1970s, and cutting-edge alpine ascents such as the FA of Torre Egger and a still-held high point on the North Ridge of Latok, Pakistan. Tingey, a climber since age 14, has climbed a great deal in Little Cottonwood Canyon, where the classic 5.7 Tingey’s Terror is named for him. He has also worked as a climbing ranger in the Tetons, and, beginning in 1991, the assistant superintendent of Denali National Park, spending time on Denali every summer for 30 years. Most recently he served as director of operations for the National Park Service in Alaska.

“My father, when I turned 30, said, ‘We thought you’d grow out of this stage” – meaning, he says, climbing. Tingey never did: “I’m as fascinated by climbing and enjoy it just as much now as I did then. Maybe more. “

This week’s Bird Brain Boulevard ascent followed an aborted attempt, when the two arrived for the climb but, seeing headlamps ahead of them, turned around. The route follows a chimney system, with some loose rock as well as the chance of falling ice. Neither wanted to be under anyone else on it, and both were plenty willing to wait and come back another day.

A few hours after the climb, Donini attended an auction held by Chicks With Picks to benefit the Ouray Ice Park, and drew the event’s top dollar, $550, for two days of crack-climbing instruction in Indian Creek, where he has long led 5.11 cracks comfortably.

“So very, very generous of him, and it was his idea,” says Kim Reynolds, founder of Chicks with Picks.

Says Donini, who was to go back out ice climbing with Tingey again two days after Bird Brain: “From two 70-year-olds, the lesson is don’t let the dust settle on ya. Go out and have fun.”

Says Tingey, “We had a great time. We always do. Jim and I have been climbing together for 40 years.” 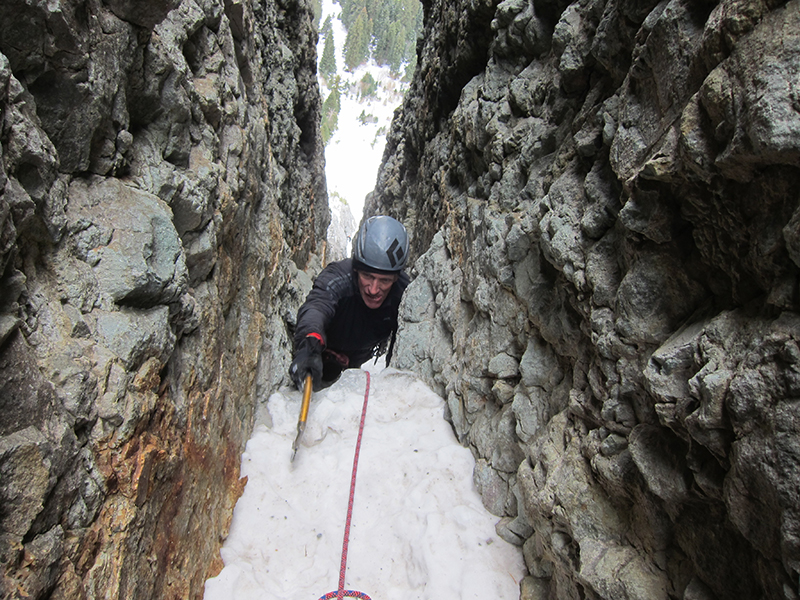