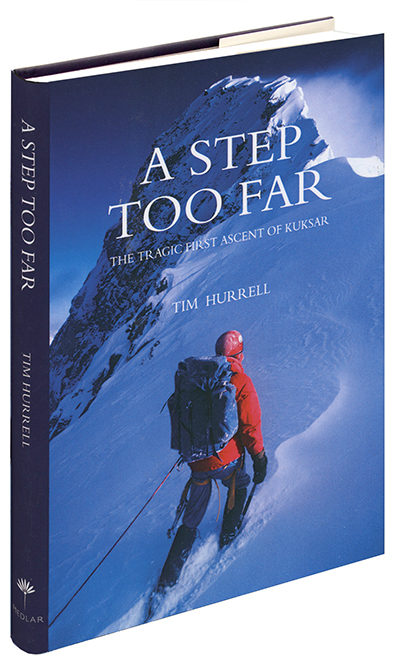 A Step Too Far – The Tragic First Ascent of Kuksar, is a new book, published in 2015, based on the diaries of Tim Hurrell from his 1982 expedition to the Karakoram. Martin Hore wrote the Foreword and Endnote to the book and here sets the scene for the excerpt that follows:

Tim Hurrell and Steve Brodrick were killed some time on July 20th 1982. Their bodies were discovered at 8:00 a.m. on July 22nd and were buried in a deep crevasse at 5500m at the base of the Kuksar couloir. Those of us who had spent time with them in the mountains were left with memories of their love of wild places, their infectious enthusiasm for exploration, and their selfless friendship. They also left us a diary and films showing that on July 19th they had stood – successful – on the summit of Kuksar.

Tim Hurrell was a diarist of exceptional dedication. His record of the last six days alone, written under quite extreme conditions, as the record itself shows, runs to some 8000 words. His work is punctuated with a keen wit, and a careful observation of his natural surroundings and of his human companions. A Step Too Far is Tim’s personal record of the 1982 Kuksar Expedition, transcribed with as few alterations and additions as possible from his original notebook.

Readers, particularly those with mountaineering experience, may judge that we were, in 1982, a fairly inexperienced team of young mountaineers. This wasn’t fully apparent to us at the time, but looking back it is clearly true. Our previous experience in high mountains – all of us except Steve had climbed in the greater Himalaya before – had not prepared us fully for the difficulties that Kuksar presented. We were largely self-taught, and on Kuksar we were on a steep learning curve. This undoubtedly contributed to the challenge, but also perhaps to the tragic outcome. For all of us, but for Tim and Steve especially, Kuksar did indeed prove ‘a step too far’. 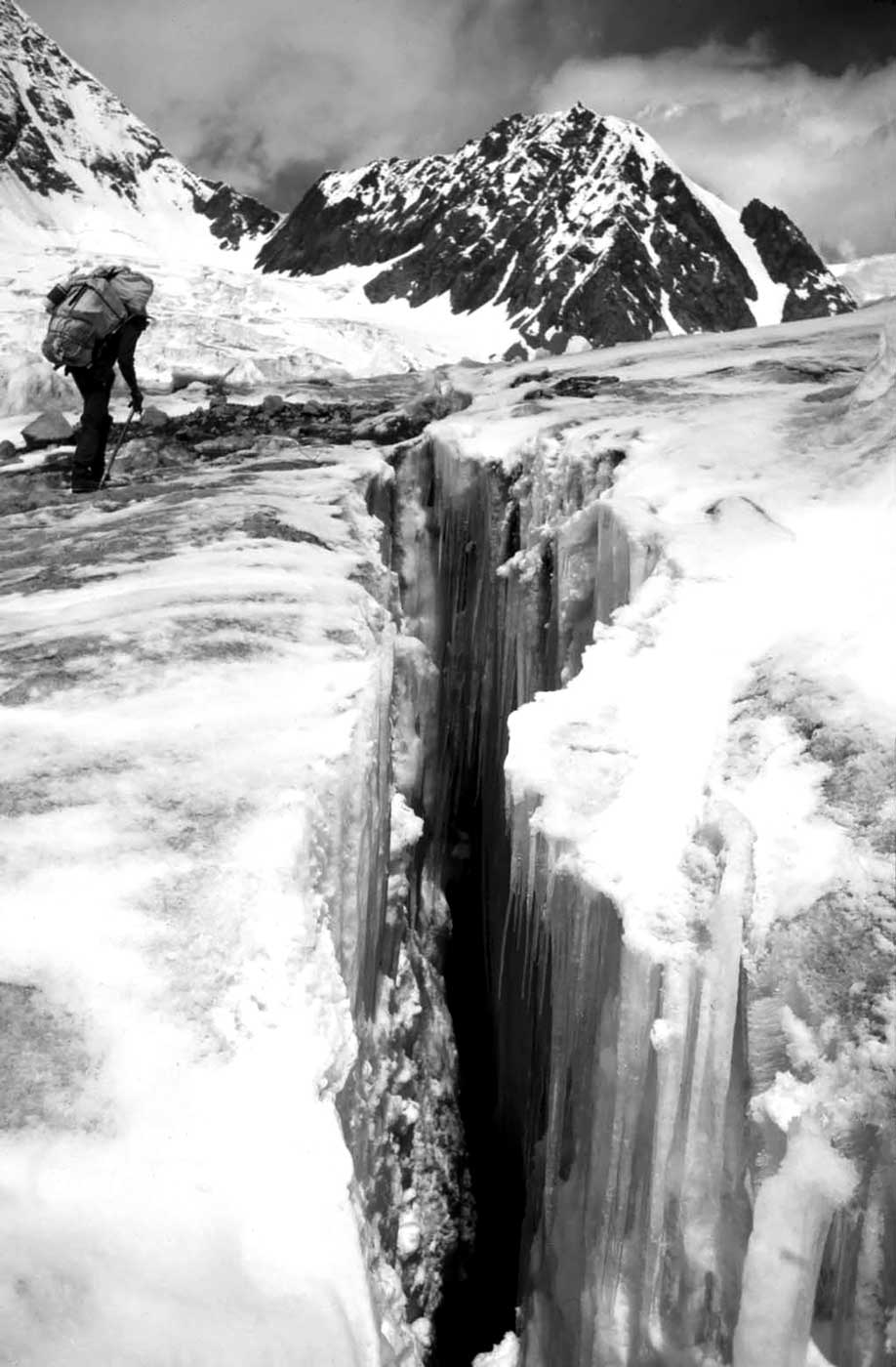 Sometime during the night Steve said there was an animal outside.

“I’ll look for its footprints in the morning,” I said. Why aren’t his sleeping pills working?

At 1:30 the alarm went off. The thermometer in the porridge billie said -3˚C even after I poured water onto it. Cooking took little time; Steve was packing his rucksack at the end of the tent and putting on his gaiters. In the end it was I who held things up, especially after a crampon strap broke (down to one spare). We eventually set off as the moon disappeared to the west, leaving an eerily white glow behind the peaks – sharp silhouettes, jagged and impressive, as if a search light beam lit them from behind. I was following Steve, his torchlight beam glinting in the snow, his footsteps easy to follow – so very large. He was breaking through the snow crust. Straight away I realized we were not going to get to the col. We bridged a few crevasses, the gentle sags of snow over them hardly discernible by torchlight. Slowly the light of Steve’s head torch swinging back and forth started to rise above me. We pulled ourselves up around some old avalanche debris fallen from the seracs on our right, then climbed onto the mush beneath the ramp. In the semi-darkness it was easy to trip over, the height of each lump not being easily discernible.

We were going very well; the afternoon avalanches had cleared the soft snow off the ramp and I was again optimistic of success. Steve, well ahead, was kicking steps and occasionally cutting platforms to rest on. Then he started going slowly and when I came up to the same spot I saw why. Soft snow one foot deep. The avalanche hadn’t cleared this. We pressed on, straight up, sometimes finding a crust. Then just as the rocks on our right indicated that we had nearly succeeded in reaching the top of the ramp, the snow got deeper and deeper, and eventually I found myself in such a pit of softness that I couldn’t climb out. Every time I got a foot over the top and heaved up on it the footstep collapsed. I was desperate. Soon I was exhausted, as attempt after attempt failed and the pit I was in just enlarged.

Repeatedly up the next 100m I had to call on Steve to wait. Finally, completely exhausted, I pulled up to the top of the ramp to join him and we had a few sweets to be going on with. It was 5:00. Light had come. The whole of the 7016m massif on the far side of the valley glowered with warmth, gold and ethereal. The clouds in the sky were all long wisps – a sign of bad weather and I wondered what to do. Then I saw some thin altostratus. It was not moving; it was the only sign for optimism. 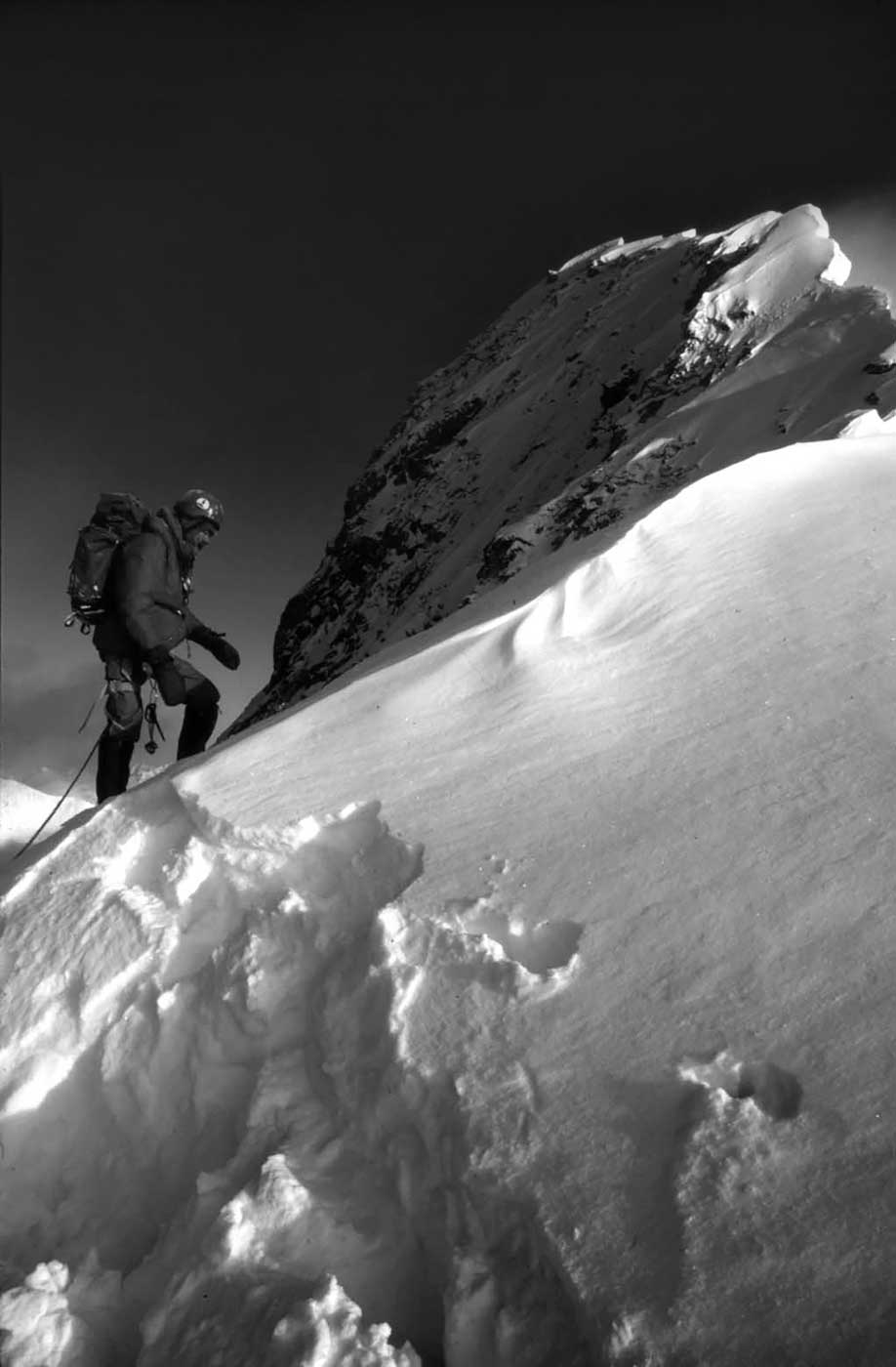 “You are too close to the cornice.”

“If I go any further left I could start an avalanche – which actually may not be a bad idea!”

But the top of the ridge did not lead to the couloir. We had to go higher for this which meant more soft snow. Finally I found an avalanche runnel and pulled up more quickly between two rock buttresses. There was a 20 foot rock wall to descend. Steve lowered me down; there were a few good footholds in the metamorphosed rock and one good hand jam but hand holds kept running out. However, I found a way down and then onto the snow. I collected the rucksacks that Steve had lowered down over some huge icicles and then he followed.

“Nice bit of rock climbing,” he said and I promptly dropped a mitt which disappeared 100m down or so. We had to traverse slightly down into the couloir anyway so I dropped the 100m and joined Steve further along while he coiled up the rope. The texture of the snow changed from ‘thigh wade’to crunchy ice but it was all far too tiring. We were making slow progress but we persevered. The sun slowly crept towards us, across the white Northern Ice Flow; below I could pick out our tracks but the camp had disappeared out of sight.

Up above Kuksar, the plume of cloud from the top moved west while the altostratus higher up moved east. We crept slowly up the 45 degree slope, sometimes on easy crunchy ice in avalanche runnels that suddenly became hard. Oh how tired my left arm became from swinging the ice axe! Between the runnels it was soft, easier going, but runnels are made by avalanches. Out on the couloir proper, the snow was peppered with little marks where snow and ice crystals had rolled and bounced down. The problem was that there was a foot of soft snow underneath, and the thick soupy clouds that yesterday had just managed to hold off to the S.W. today were engulfing the sky above us and the sun was weakening. There may be no melting of the surface – no crust even tomorrow. Steve had noticed that our two packs were of dissimilar size. Even though I now had the rope (I let him lead most of the way to stop myself burning out), he was stopping and panting with exhaustion. I searched out rest spots, but all the rocks sloped uncomfortably the wrong way. There was nowhere to rest and offer each other encouragement. My calves were aching. Eventually I thought I had found myself a place, but the thick snow around it and the effort of unhitching the rucksack cancelled the benefit of the rest. The other mitt rolled away merrily 600m or so out of sight into nowhere. Steve had a spare and I cursed that I hadn’t brought my spare. 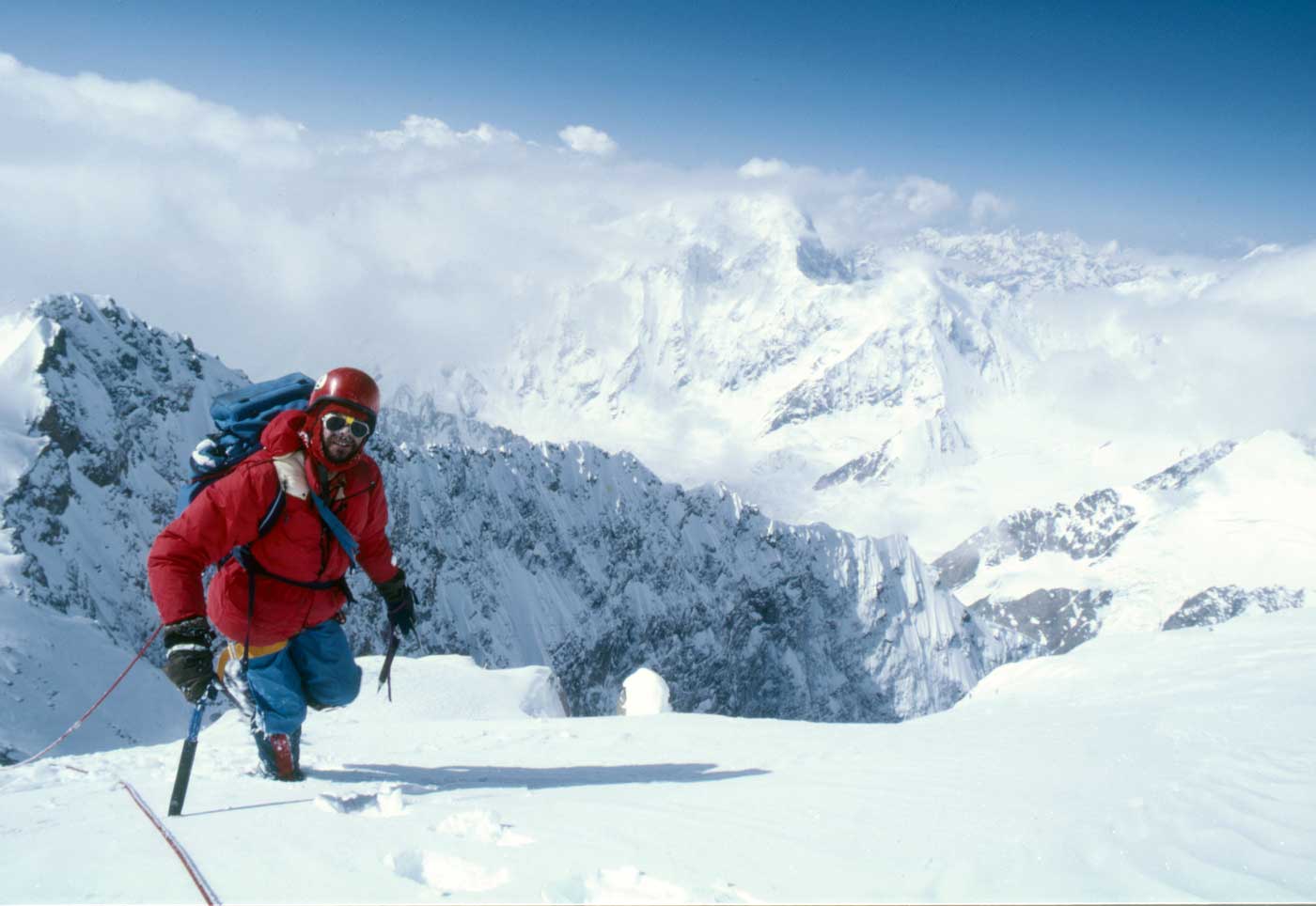 Every time there was an avalanche, we looked quickly to see where it was coming from but most came off 7016m. Occasionally one came off the slopes to our left, but all clear of us and the couloir. We had passed our 7:00 o’clock point of no return. Now it was 8:30. The sun’s rays reached us. We identified a possibly bivy site and spent the next couple of hours slowly digging out a shelf. We cut through the soft snow to crunchy ice, then to hard water ice.

We brewed a tea, and stopped work for biscuits and ham, jam and chocolate. Finally we had the four ice pegs in and the rucksacks and ourselves firmly belayed onto a shelf, perhaps 12 feet long from 2 to 4 feet wide (depending on where we hit rocks). We suspended the bivy tent from ice axes above and at last felt secure. There was a cloud above and below and the milky sun was still burning. We retired to the ‘tent’. Inside it was hot – the greenhouse effect, till the sun went in and the snow dripped less and it became cool inside. Time to pull up socks and put my Helly Hansen back on. In the heat I had had half an hour’s doze.

“Never done anything like this before,” said Steve. Occasionally bits of ice would bounce down. We had a problem – nowhere to go to the toilet . . .

Tim Hurrell had a great love of outdoor life and became a passionate mountaineer, photographer and naturalist. From family holidays in Wales, Scotland and the Alps, to adventures with the Cambridge Mountaineering Club and with his own expeditions, he travelled and climbed in many parts of the world. A keen writer, he recorded all his travels and adventures in Turkey, Iran, Afghanistan, Greenland and numerous trips to the Himalaya. Other than this record of the first ascent of Kuksar, he also leaves us a number of diaries, including successful climbs of Rishikot in the Hindu Kush and Huscaran in the Peruvian Andes.