David Chaundy-Smart took it as a compliment when his high school vice-principal told him he was wasting his youth by climbing. A Youth Wasted Climbing tells the story of how he and his brother, Reg, spent the last years of the 1970s fighting suburban boredom to become, in the words of renowned climbing historian Chic Scott, “one of the leading figures in Ontario rock climbing throughout the 1980s.”

With its vivid accounts of short and nasty climbs, dubious mentors, hapless climbing partners, teenage crushes, bad cars, underage drinking and questionable climbing techniques, this is a memoir of coming of age in a simpler era of climbing, told with compassion, humor and insight.

A Youth Wasted Climbing is a finalist in the Mountain & Wilderness Literature (Non-Fiction) category of the 2015 Banff Mountain Book Competition.

Excerpt from A Youth Wasted Climbing – by David Chaundy-Smart 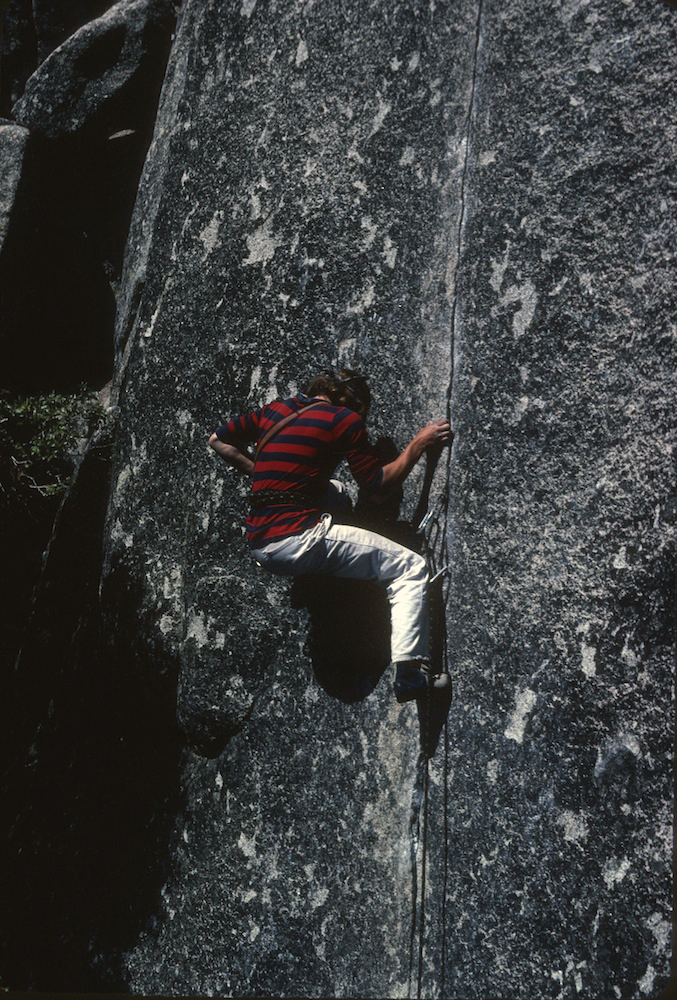 Judy and I pitched a tent between the emerald-leaved birches. Rain had soaked us while we crossed the cold water of Mazinaw Lake. Mike Tschipper, who I wouldn’t see again for years after this weekend, grimaced as water poured through a hole he had punched in a garbage bag for his head. Judy and I had our own source of misery. It was June 1980, and we were fighting about our plans for the next year.

In the summer, I would teach rock climbing to fund a trip to Yosemite with Brian Hibbert, Reg and Gerry Banning. In the fall, I would be free from school. Reg and Sig wanted to work in oil- and job-rich Alberta and then head to the Mojave Desert and Yosemite to climb in the spring. When I told Judy I was considering going with them, she said I was squandering my life. We’d been over it before. For her, climbing was an opportunity for education, travel and personal growth, but for me, it was just a path to more climbing.

The next morning we joined the climbers in the boat bound for a route we could both do easily. As we passed the Joke, however, Judy said that this was her last trip to Bon Echo and she wanted to climb it. She looked serious as she tightened her harness buckle. I didn’t tell her about the traverse where a fall, even seconding, could hurt her, I just grabbed my rope and rack and told the boatman to take us in.

On a tiny, wet ledge we tied in to the same rope for the last time. Judy watched nervously as I led up steep, dark rock to a menacingly protruding piton, but I wasn’t worried: I had done the climb before. Even dangerous climbs lose much of their terror when the holds and exact places for protection are known. The crux traverse started at a slanting overhang 60 feet above the lake. The hardest moves were close to the protection, and I began to enjoy the rock, the smell of chalk on sweaty fingertips and the feel of tight rock shoes on tiny holds.

There was, however, little protection for the climber coming second. From the belay, the rope swooped down across the face to Judy, who had climbed the crux and was inching towards me. Just as she reached the safety of the ramp, her fingers popped off the face and she swung out of sight. The rope zipped across the edge of the ramp, sending tufts of nylon flying. She had disproven the myth that if the second climber fell at that point, the rope would cut on the ramp, but she now hung free of the rock. She yelled that she was going to use the thin climbing line lacing her shoes to tie prusik knots and climb the rope.

Prusiking took a long time because the knots tightened when weighted and had to be loosened before being pushed upwards again. When Judy finally got to the ledge, she was breathing hard, her hair was damp with sweat and her knuckles were bloody. She tried to smile and seem ready to go on. We did go on, but after the intensity of the first pitch, the rest of the climb was almost a relief.