The Access Fund has announced its 2016 Menocal Lifetime Achievement Award, Bebie Leadership Award and Sharp End Awards. These annual
awards recognize individuals, organizations, and businesses that “go above and beyond to volunteer their time and efforts to protecting America’s climbing.” 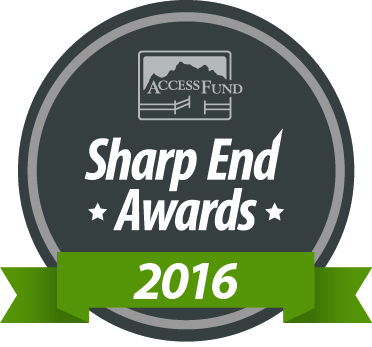 Access
Fund is honored to present Greg Barnes with a Menocal Lifetime Achievement Award. Greg’s singular focus on fixed anchor education and replacement has
made our climbing areas safer and more sustainable. Greg is the longtime director of the American Safe Climbing Association (ASCA), a national organization
that has provided—at no cost—new bolts and hardware to hundreds of local climbing organizations and volunteers across the country. Greg
developed some of the first and most enduring best practices for rebolting and fixed anchors and continues to be a leader in the field, presenting
at Access Fund’s Future of Fixed Anchors conferences and serving on our Anchor Replacement Fund grant committee. Greg has personally replaced many
thousands of bolts in California, Nevada, and beyond.

Access Fund is proud to present Ian Caldwell with a Bebie Leadership Award for his incredible dedication to Smith Rock, one of America’s most iconic climbing
areas. Ian has played a central role in the Smith Rock Group since 2003, coordinating the annual Spring Thing climbing stewardship event, which celebrates
its 25th anniversary this year. Ian also replaces bolts and anchors at Smith and volunteers for the Deschutes County rescue team. Decades ago, Ian
was an Access Fund Regional Coordinator and served as president of the Madrone Wall Preservation Committee. Ian has also worked to protect climbing
areas across the Northwest and played a lead role in the 2016 Northwest Sustainable Climbing Conference. Congratulations, Ian, and thank you for your
outstanding leadership.

Access Fund is pleased to present Roger Briggs with a Sharp End Award for his work to protect Colorado’s Front Range climbing areas. Roger founded the
Boulder Climbing Community organization in 2012 and spearheaded the Front Range Climbing Stewards, a locally based climbing access trail crew, in partnership
with Access Fund. A Boulder original, Roger has dedicated his life to climbing in the Front Range, working tirelessly to promote stewardship and responsible
use.

Access Fund is excited to present the Keithley family with a Sharp End Award for their outstanding commitment to climbing area stewardship. Jimmy, Melissa,
Zoe, and Noah bring a level of enthusiasm and commitment to climbing area stewardship that is impossible to overlook. As parents, Jimmy and Melissa
strive to instill a strong stewardship ethic in their children, combining fun family climbing trips with stewardship work at the climbing areas they
visit. Zoe and Noah now provide a positive example to their peers of what it means to be a climbing steward. Jimmy is also a board member of the Salt
Lake Climbers Alliance and chair of the Wasatch Anchor Replacement Committee. Thank you, Keithley family, for making climbing stewardship a family
value!

Access Fund is honored to present Eve Tallman with a Sharp End Award for her decades of work with Western Colorado Climbers’ Coalition (WCCC) and her instrumental
role in protecting Unaweep Canyon. In 2008, Eve helped secure Upper Mother’s Buttress, and in 2014, she expanded climbing access by securing the threatened
Lower Mother’s Buttress and Television Wall. Without her behind-the-scenes organizing, grant applications, and on-the-ground stewardship, WCCC and
Access Fund would not be able to celebrate a long legacy of conservation and climbing access in Unaweep Canyon. Thank you, Eve, for your contributions
to Western Colorado and beyond.

Access Fund is honored to present Chris Irwin with a Sharp End Award for his deep commitment to stewarding and protecting Mid-Atlantic climbing areas.
Longtime board member and current president of Mid-Atlantic Climbers (MAC), Chris has been instrumental to MAC’s stewardship projects at areas like
Great Falls, Carderock, Shenendoah, Coopersrock, Northwest Branch, and many more. More recently, Chris worked with Access Fund and other MAC board
directors to officially open Mount Catoctin to bouldering.

Access Fund is proud to present Ben Bruestle with a Sharp End Award for his leadership of Southern Colorado Climbing Resource and Advocacy Group (SoCo
CRAG) and his work to preserve and protect climbing areas in Southern Colorado. Ben has been instrumental in orchestrating Adopt a Crag stewardship
events and climbing days at multiple sites, making strong inroads with a host of local land managers. Ben also dedicates countless hours to replacing
worn, aging anchors and bolts in the Wet Mountains.

Access Fund is proud to present Roger Van Damme with a Sharp End Award for his outstanding leadership as Chairman of the Friends of Muir Valley. Roger
has carried on Rick and Liz Weber’s vision for stewardship and conservation of the Muir Valley climbing area in the Red River Gorge of Kentucky. Roger
grew and strengthened the Friends of Muir Valley organization so significantly that the Webers decided to transfer Muir Valley to the organization
in March 2015. This was a milestone in Red River Gorge climbing conservation. Roger improved day-to-day management at Muir, hiring support staff and
instituting a successful parking donation system. With sincerity, humor, and an incredible work ethic, Roger inspires hundreds of Muir Valley stewards
and volunteers.

Access Fund is honored to present Gus Fontenot with a Sharp End Award for his decades of service to Southeastern Climbers Coalition (SCC). An Alabama attorney,
Gus has provided hundreds of hours of legal service to support SCC’s work in Alabama, Georgia, and Tennessee. He has played a critical role in all
of SCC’s climbing area acquisition projects, and he organized the SCC Land Trust. Climbers can enjoy areas like Boat Rock, Steele, King’s Bluff, Hospital
Boulders, Castle Rock, Jamestown, Denny Cove, and more thanks to Gus’ generous contributions.

Access Fund is proud to present Jack Santo with a Sharp End Award for his leadership of Ohio Climbers Coalition (OCC). Jack founded OCC and immediately
set in motion advocacy and stewardship campaigns for Ohio climbing areas like Cleveland Metro Parks and Cuyahoga. Over the past year, he has spearheaded
a partnership with county parks to open Mad River Gorge, Ohio’s largest climbing area. Jack is planning a large-scale Adopt a Crag event this May in
preparation for the Gorge’s grand opening. Jack recently relocated to the Pacific Northwest but is staying deeply involved with OCC.

We are proud to present Outdoor Research (OR) with a Sharp End Award for its long-standing support and dedication to the protection of America’s climbing
areas. OR’s leadership in helping launch the Climbing Conservation Loan Program in 2009 was a pivotal moment in the history of climbing conservation,
making possible the purchase of 24 climbing areas. Outdoor Research also collects pro-purchase donations to support the protection of America’s climbing
resources and has recently stepped up to defend our public lands.