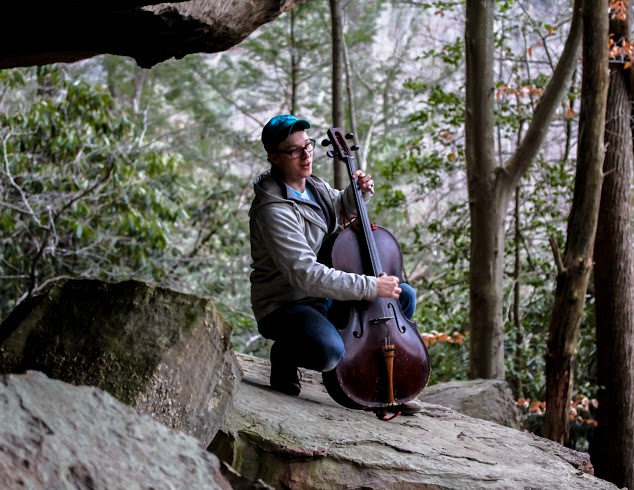 Usually, when you meet a person of fame, they arrive with an entourage, driver, fine linens & automobiles from the likes of Milan and Porsche. However, when Kentucky native and internationally acclaimed cellist/artist, Ben Sollee, arrived at the Red River Gorge’s Sky Bridge Station—a place that serves as a hostel, bar, restaurant, and the headquarters of KRAG rock climbing guides—for a benefit concert, that wasn’t the case.

Sollee could have fooled the most discerning paparazzi as he stepped out of his blue Honda Element. Clad in an everyday pair of faded jeans and worn hiking boots, Sollee tugged on a Patagonia hat against the chill. Most would have thought he was just a typical outdoor enthusiast out to experience the beauty of Red River Gorge. But that was only half the story. In fact, Sollee was there to team with up another Kentucky musician, Jason Tyler Burton, to lend their star power in support of the Red River Gorge Climbers’ Coalition and their latest endeavor: to secure land for recreational access and climbers. Solle’s involvement shouldn’t come as a surprise, however, considering his past exploits include biking to Bonnaroo, raising Monarch Butterflies with his small family and hosting a canopy concert to raise money for Louisville, Kentucky’s tree canopy.

Sollee only had an hour-longwindow before the benefit concert was slated to start, but he was eager to explore the Daniel Boone National Forest and experience the Red for himself.After easing his Honda Element into a pull-out on the side of the road, he plunged into the forest following a moderate trail, worn from the pilgrimagesof climbers to the Eastern Skybridge crag. True to form, Sollee trekked along with a cello strapped to his back by a single rope. After arriving at thecrag, he sat down and noticed that the curvature of the rock face created a natural amphitheater … so he began to play. He filled the forest withmelodies that even the most non-musical outdoorsmen would find infectious. But this impromptu performance was just a prelude to headlining that night’sconcert, which raised over twenty-five hundred dollars for the Climbers’ Coalition.