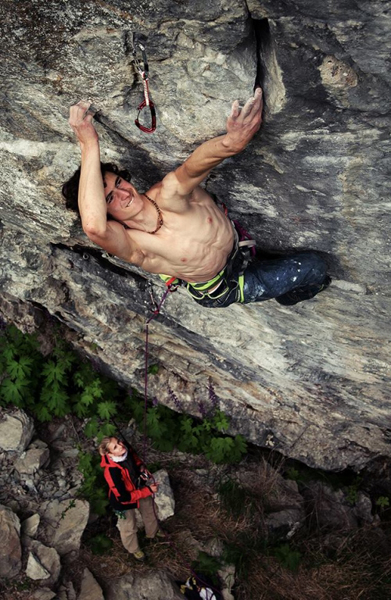 Adam Ondra has done it again, making the first ascent of yet another 5.15b on Saturday in Flatanger, Norway. The route, called Iron Curtain, was originally bolted by Lars Audun Nornes. According to Ondra’s 8a.nu scorecard, he worked the route for six days and was forced to wait out several days of bad conditions. On the day of the send, Ondra describes how he “fell off one meter below the anchor because of wet hold in the morning, wanted to rest for the next day, but strong wind breaking the pole of the tents made me go out and send in a beautiful evening.”

Ondra has established himself as one of the best sport climbers in the world in recent years. He has climbed at least 25 routes rated 5.15a or harder. In October 2012, he became the first person to climb a 5.15c when he redpointed Change, also in Flatanger. In March of this year, Ondra redpointed Chris Sharma’s project La Dura Dura (5.15c) in Oliana, Spain. More recently, he became the second person to onsight 5.14d when he climbed La Cabane au Canada in Switzerland one month ago. With better weather in the forecast for Norway, Ondra hopes to spend the rest of his time in Norway working a few projects he bolted back in May.