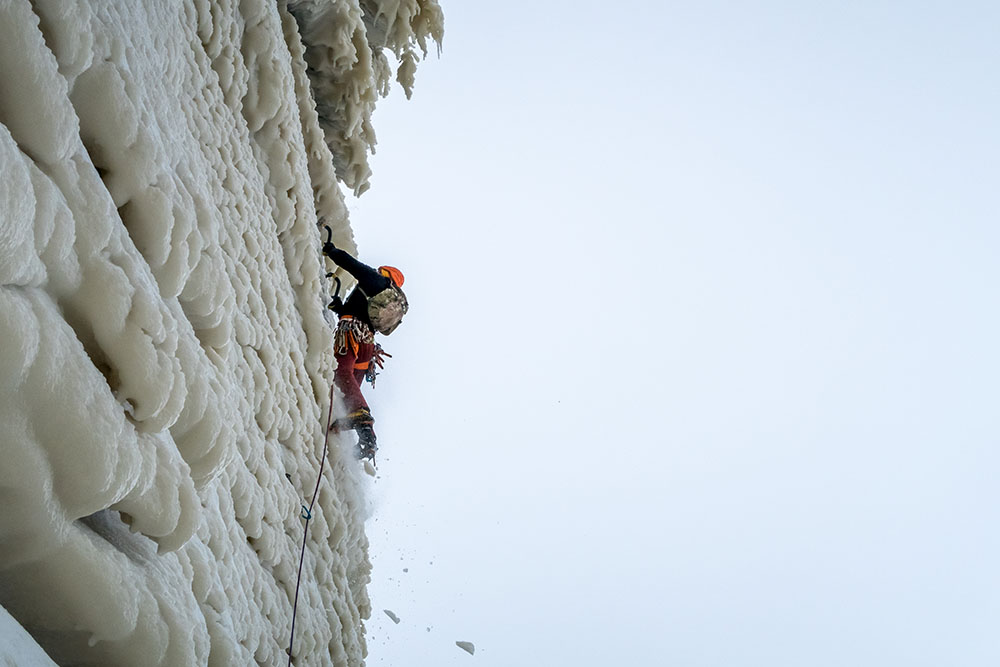 It was clear that Casey was sad to leave, but his goodwill toward Joe and the generosity of spirit was palpable. Casey wanted the route to go down for Joe, regardless of whether or not he was physically present for the send. We knew then, as well as we know now, that this route is more his and Joe’s than it is mine and Anna’s but his benevolence is a fine testament to his character.

After describing the overwhelming intimidation factor of the wall with wild eyes, and wishing us a hearty, “Good luck,” Casey left. Joe, Anna and I packed up and made final arrangements with our guides and Joe’s long-time friends, Frank and Mike, for a 5 a.m. start the following morning.

In darkness early Tuesday morning, the five of us snowmobiled for an hour and a half through the scraggly forest and rolling mountain tops of Gros Morne to reach the top of the falls at first light. We descended the long snowy gully and reached the shore of Western Brook Pond at 8:30 a.m.

I gawked at the massive frozen mass of bizarre ice formations. Our intended climb was adorned with giant medusa heads and bulbous daggers, which seemed to defy the laws of physics; the giant formations hung by scrawny appendages, like Popeye’s forearms from his emaciated upper arms.

“Spray ice is different, the typical rules of ice formation will not be relevant here,” I thought.

We ascended the slope to the base of the wall, which was a giant talus field of ice boulders and an indicator of how volatile this ice climb is. We resolved to move fast. We roped up at 9 a.m. and simul-climbed smears of water-ice up the 500-foot protected ramp to the right of the lower icefall to reach the wall adorned with golden spray ice. 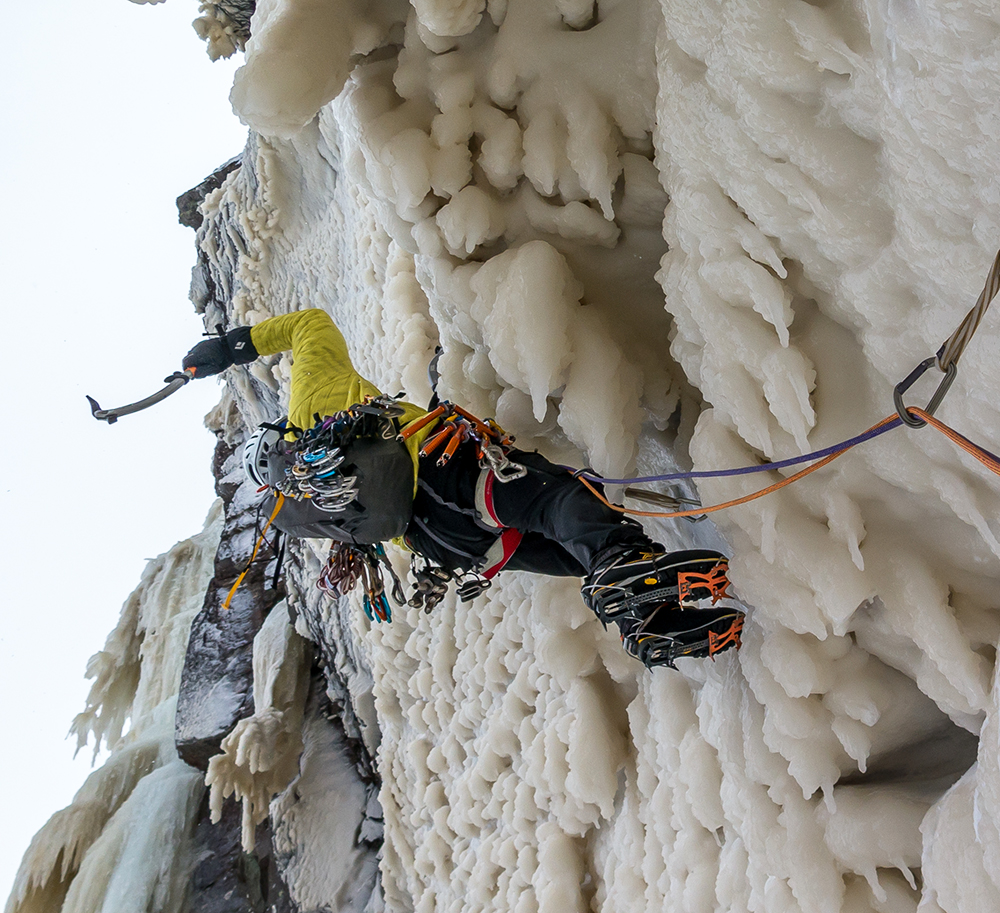 We quickly climbed the 230-foot second pitch of grade 4 spray ice up into the safety of a spacious ice cave. I climbed as fast as I ever have, the hair on the back of my neck standing erect in fear of the looming, bizarre and Dr. Seuss-like, giant twisted icicles that hung precariously, like time bombs, hundreds of feet above our heads. The third and fourth pitches, each 100-feet long, were about grade 5, but the ice was different, comprised of mottled, bulbous ice that exploded when struck with our tools to expose strange layered ice beneath with a core of white snowy crystals. Joe led the 100-foot fifth pitch, which was the crux and involved an overhanging bulge to gain the broad upper corner system and the ultimate finishing headwall. The ice here is thin and it was here that Anna and I waited with baited breath to hear whether a belay would be possible.

The sixth pitch was the icing on the cake, 230 feet of perfectly vertical, thin grade 6 spray ice with the texture of a brain: thin but mostly just thick enough for stubby screws and a healthy runout at the top to reach the frozen moss and the trees.

After topping out, we hiked up through the frozen fog to reach our snowmobile at 4:30 p.m. We felt overcome with disbelief… almost numb, like in a dream. We threw around some names while we waited for our guides to arrive with the other two sleds and our way back to civilization. They arrived and pulled the bonnets off their sleds to reveal muffler pots stuffed with smoked native salmon and trout and a bottle of scotch. 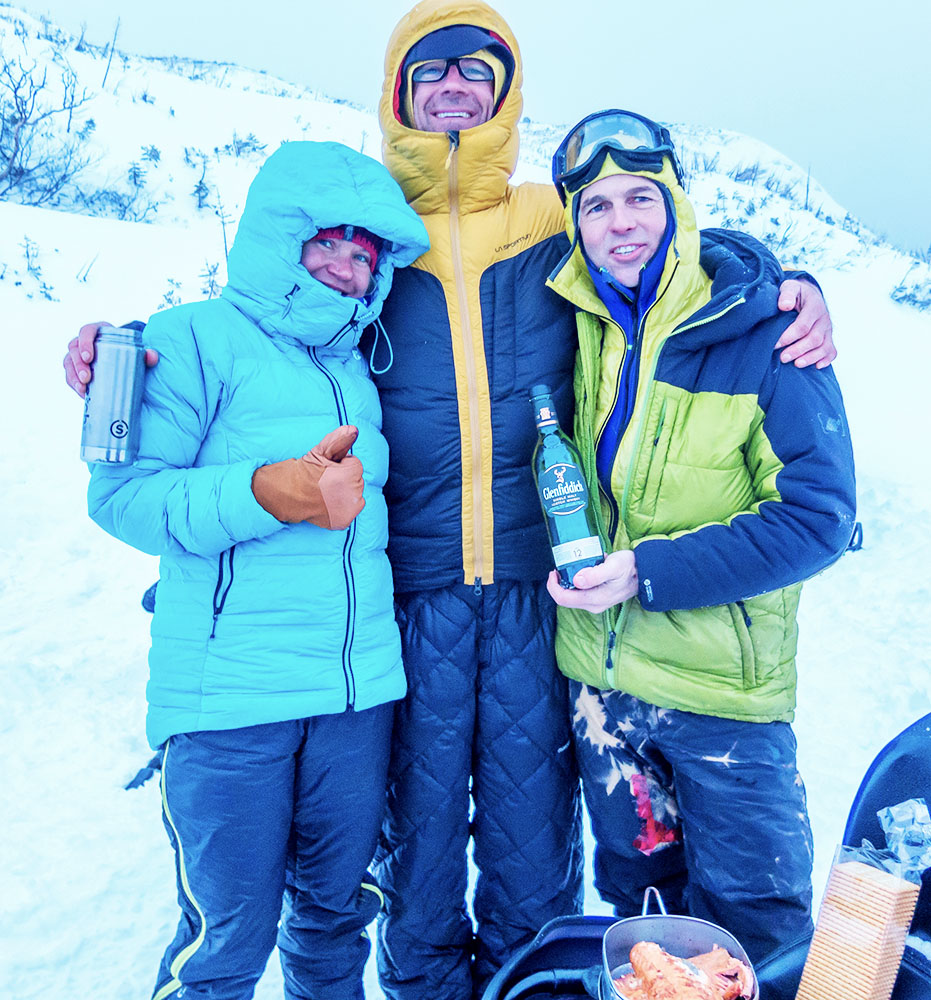 Over the years, Joe has almost always chosen names with Newfoundland meanings, as tributes to this unique land and its people. We ran through a series of ideas, but Joe kept referring back to ideas Casey had had over the years. The name was important, Anna and I realized, and soon fell silent leaving it up to Joe and his memories of all those years with Casey. Finally, it came to him: “Dreamline”.

This climb had been the obsession of Joe and Casey for two decades, and rumors and conjecture of their taciturnity was often discussed in hushed voices over drams of scotch by many of us “new b’ys” (Joe’s fond name for the next generation of ice climbers), always wondering where it was that Joe kept going each year. Joe and Casey had devoted the primes of their careers to this climb, with unwavering devotion.

Finally, this week, Dreamline came to pass. And the three of us agree that this was the most adventuresome and satisfying ice climb of our careers.