When Alex Honnold topped out on El Cap’s Freerider (5.12d) this past Saturday donning a chalk bag, shoes, and ear-to-ear grin he wrote
the closing sentences in a chapter begun on November 12, 1958. Let’s call the chapter “El Cap,” and the book “Yosemite Rock Climbing.” Warren Harding,
Wayne Merry, George Whitmore, and Rich Calderwood started the chapter when they first climbed The Nose in 1958 after over two years of effort. Now,
Honnold has climbed El Cap solo, no rope, sub four hours. What just happened? 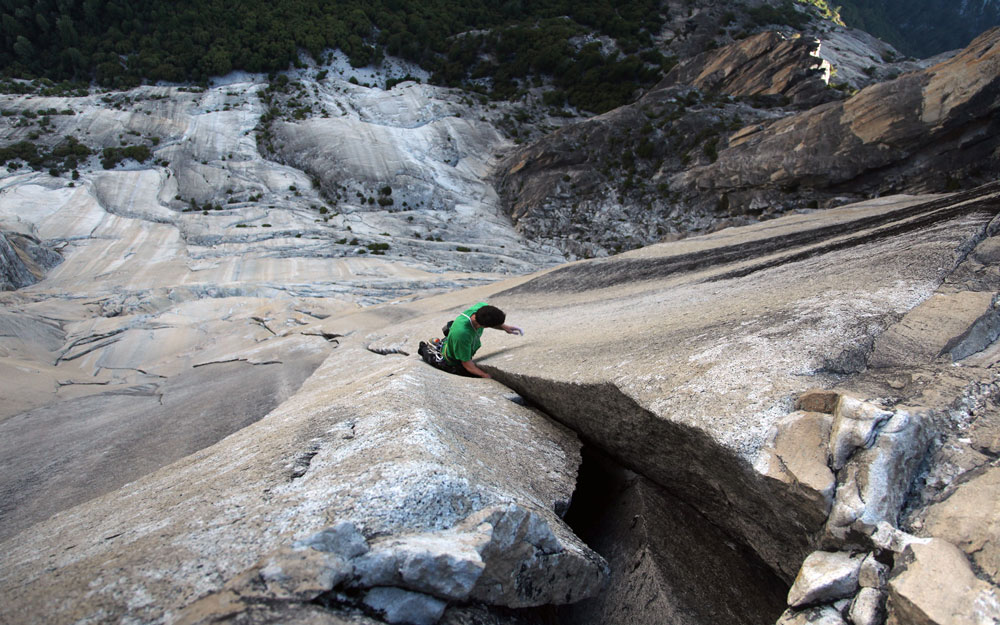 Of course, as is often
the case, there is what we imagine happened, and then there is reality. The myth is of the soloist conquering death, wrestling with demons, getting
pumped full of adrenaline but barely evading the Grim Reaper by some sliver of fate … treading so close to life’s outer limits as to taste the nectar
of the most secret fruit, you know, the hero’s struggle, fortitude, bravery, valor. One would think that to pull this off Honnold would have to spend
the week prior eating purified pine berries and the bark of bonsai trees, sitting in lotus position most of the day meditating on his muladhara chakra
and steeling his mind against any and all unwanted intrusions.

But reality is different, and Honnold is keen to give you reality—in a post-send interview with Rock and Ice Honnold said that he bouldered the day before and hiked with his mom.
Later that day, he watched the new Hobbit movie, he said in another interview. That night, when you’d expect his nerves to be suffocating, he slept “like a baby.” During the climb, the Monster
Offwidth pitch felt like a “cruiser,” and he admitted to thinking about climbing something “hard” during the solo. That afternoon, he
did some hangboarding. Post-send, he was amped to do it again.

For most, what Alex did is lumped into the class of images/acts of individuals walking across high-wires without a back-up, or of once-popular public stunts
performed over town squares or piazzas. Think David Blaine. Images of free soloing are shocking, confrontational, and always framed with a certain
vertigo: the ground drops out beneath the climber, and the interplay between the climber’s position vis-a-vis the ground is where the dark art of soloing
saturates these images. It’s an existentialist photography. Soloist imagery is panic inducing, and I say this because neuroscience research has found
that when we look at images of people in certain positions, our brains activate as if we are in that position. The soloist’s art is that everyone and
no one can relate to it.

Even Honnold’s longtime friend and partner, Tommy Caldwell, can’t relate, writing: “As one of his closest friends and an El Capitan addict myself, you
would think I would have a handle on what it would mean to free solo the Freerider. But I don’t. No one does. Except Alex.” In the tradition
of John Bachar, Peter Croft, Michael Reardon, and Dean Potter, the great soloists come around every decade or so, appearing, much as Honnold initially
did in Camp 4, like pieces of wilderness in our otherwise chartered territory.

Ironically, the achievements of soloists reside nowhere but in legend and lure—not in the route itself, since hard soloing rarely requires new development
or a first ascent, nor in a bolt, nor a belay station, nor a topo. Often, there’s not much to say. Case in point with Honnold. The soloist leaves nothing
behind—not a route name, nor a number, nor a time—just as they ask little from a climb. Bolts, belay stations, gear beta—it doesn’t
mean anything to a soloist. True, we are left with words, images and video, but the most impactful is a type of anti-knowledge about the experience.
We want to understand, but we can’t. It’s not possible. Something occurred on Freerider that we aren’t privy to. That experience is his alone.

For climbers, Honnold’s solo was the “obvious” next step in free soloing, but paradoxically we never thought it would happen. For Honnold, however, it
was a clear goal, with achievable training milestones, and he knew just how to get himself to the point where making the approach to El Cap with only
a chalk bag didn’t feel like suicide. It’s not conquering the impossible, but an exemplar of the application of a steady hand and mind to a singular
goal over seasons and years.

I appreciate Honnold’s demeanor, his wide-eyed smile and terse Big Lebowski’isms regarding those who constantly ask him, “Don’t you know you did the most
badass thing ever?” “Do you know how epic you are?” With each attempt to get him to lower his head, Honnold shrugs. “What the world needs is for the
U.S. to stay in the Paris Accords,” he replies. He may be right, although climbing does inspire, and inspiration has a trickle-down effect. Within
our chalky piece of the sporting world, a free solo of El Cap does matter, and we are lucky to have Honnold as our ambassador to put it into a global
perspective.

In 1967 in Ascent Lito Tejada-Flores published “Games Climbers Play,” a short essay about ethics in genres of climbing. He writes that climbing at its
most complex is the Expedition Game, where it’s OK to have people port your gear (sherpas), tug on ropes, use oxygen, and so on. At the most simple,
the Bouldering Game eliminates “protection but also companions.” It’s a sliding scale, and the ethics shift with advances in gear, ability and knowledge.
According to Tejada-Flores’ definitions, Honnold just applied the Bouldering Game to the Big-Wall Game. In essence, he went big-wall bouldering.

Likewise, “fair means” alpinism, exemplified by Ueli Steck’s vision for his Everest-Lhotse project,
is another example of migrating ethics—i.e., applying (alpine) soloing to the Expedition Game. Like the mantra of environmentalism, the “leave
no trace” philosophy is being applied everywhere in climbing, at all levels. This is what is happening. Our sport’s “progression” relies on an accepted
minimalist philosophy, one that echoes with Antoine de Saint-Exupery’s famous assertion: “Perfection is achieved, not when there is nothing more to
add, but when there is nothing left to take away.”