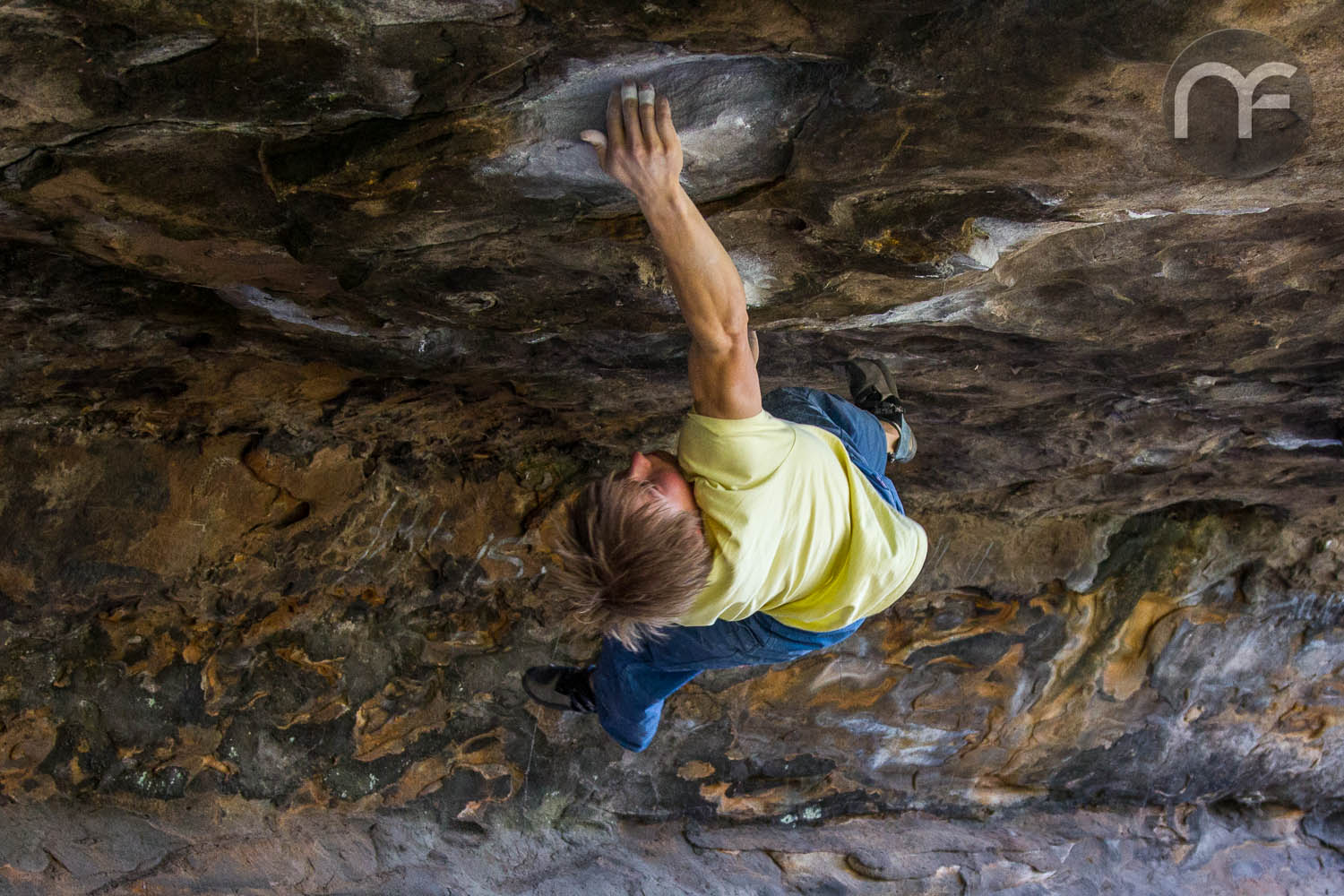 After a quick warm-up in Japan (Alex Megos: Japan Sendathon), Alex Megos headed to the land downunder to continue his world tour.

Yesterday in the Blue Mountains, he snagged the FA of Schweinebaumeln (35, 5.14d)—Australia’s second 35 (5.14d)—bolted by Lee Cossey. It took Megos two days to send the 115-foot (35-meter), bouldery climb, with a huge jump move in the roof section.

While his main focus is on route climbing, he has spent a little time pebble-hopping as well. On his first day in Australia, Megos flashed Mushi Brain (V11) and Abacus (V12), then sent Genesis (V13), at a local bouldering area outside of Sydney.

At Elphinstone the next day, Megos was back at it with a flash of Tiger Cat and an ascent of Sitting Bull, both Australian grade 33 (5.14b). He finished off another of the same grade, Beta Vinyl, the following day.

He took it easy on day four, with Combat Wombat (V11), One of a Kind (V13) and a quick first repeat of the Sydney, Australia test piece Double Demerit (V14) at Sunnyside.

Double Demerit from Exileded on Vimeo.

Rock and Ice caught up with Alex Megos to hear about his time in Australia:

RI: You’re killing it down in Australia!

AM: Yeah, well at the moment no further killing, as it is raining for two days now and probably will continue raining for the next two days as well. So we basically spend our time training and hanging out…

RI: How long are you in Australia for?

AM: In total, for about two and a half months. I arrived here on the 27th of March and I’ll leave again on the 6th of June.

RI: Are you mostly bouldering or climbing routes as well?

RI: What have been some of your favorite climbs so far? What have felt the hardest for you?

AM: Literally every route I climbed here in the Blue Mountains was amazing! There was no route I didn’t like. I did quite a few routes at the fairly new crag called Elphinstone and the guys finding and developing that crag did a very good job! One world-class route after the other! Two outstanding routes to mention here were Tiger Cat (33, 5.14b) and Sitting Bull (33, 5.14b).

The hardest thing I have climbed so far on this trip was Schweinebaumeln (35, 5.14d), my first ascent I did today (10th of April). It was a line bolted by Lee Cossey and it’s definitely one of the best I have climbed in the Blue Mountains!

RI: What are some of your other goals?

AM: My goal is just to climb as much as possible! Repeat some of the hard climbs I haven’t done yet and if possible add some more hard climbs to the list by doing some first ascents. The locals here are super nice and have already shown me some projects to try, so I’ll do my best.

RI: Have you seen any kangaroos?

AM: Not this trip yet. We saw hundreds last time I was here two years ago. There are not many around in the Blue Mountains but when we’ll head to the Grampians we’ll probably see them every day.

RI: What’s a typical climbing day like for you?

AM: Well, I get up at around 9 a.m. Then we have breakfast and we usually leave the house at around 10-11 a.m. So we are out climbing till its dark, which is at around 6 p.m. Then back home for dinner and a bit of work in the evening or movie night. That’s how a normal climbing day looks like for me.

RI: You mentioned that you have been training during the bad weather – what’s your training regimen like while on a trip? Are you training for a specific project?

AM: Yes, we trained a bit on the rainy days here in the Blue Mountains. I usually don’t train for specific projects no. It is more of a general training (mostly bouldering in the gym) to stay in shape. So the training we did was having a bouldering session at the local gym.

RI: You’ve climbed all over the world, how does the rock/routes in Australia compare?

The climbing scene here in the Blue Mountains is really cool. In the center of climbing, which is Katoomba and Blackheath, it feels like almost half the people living here are climbers.

There are not that many areas worldwide I have seen which have such an amount of incredibly good climbing!

Well good second day in Aussie! First day of climbing in the Blue Mountains this trip. Flashed Lee Cossey’s amazing route “Tiger Cat” 33 (8c)! Haven’t flashed that many routes in that grade yet so was pretty psyched about it! Thanks @nick_fletcher for the pic and @wizfineron for the belay. @redbull @dmm_wales @patagonia #BlueMountains