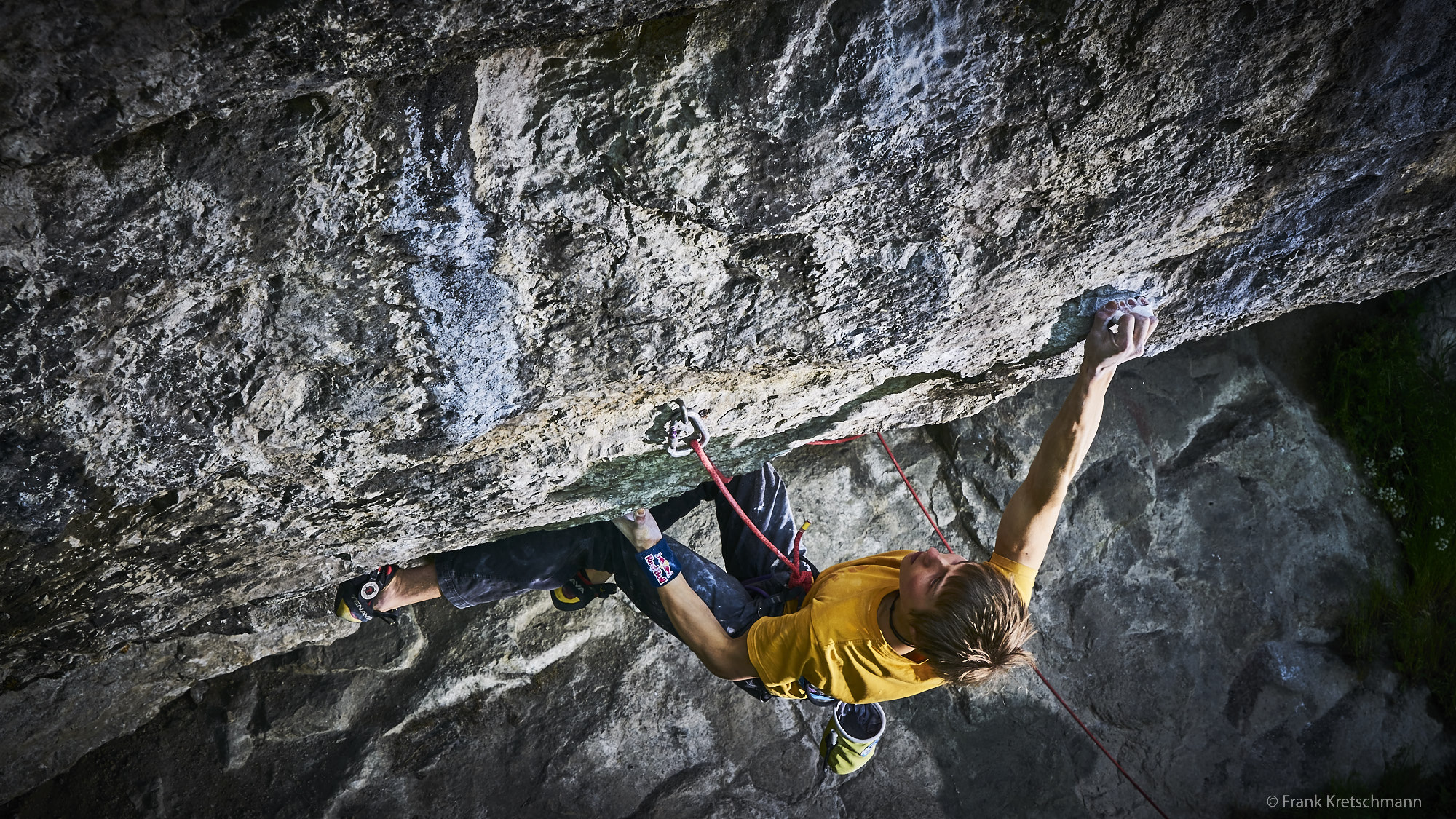 UK Climbing. Throughout its 26-year
history, Hubble had only been repeated by five climbers, all Brits, before Megos—who became the first foreigner to redpoint Hubble.

Megos first attempted the route in March 2014 after the Climbing Works International Festival Competition in Sheffield, England. “We were at Raven Tor
for only three or four hours, and first I climbed Martin Atkinson’s classic Mecca the Midlife Crisis,” Megos said in an interview
with Planet Mountain. “This
took me three goes, which only left me with about an hour and a half to try Hubble. I checked out the moves, and actually did quite well:
I fell relatively close to the end, off the fourth hard move.”

He returned to the U.K. this year and Hubble was “pretty high up there” on his list of routes to climb. “Firstly because it’s simply such a historic
route. And secondly because I hadn’t managed to climb it before,” he told Planet Mountain.
“I had some business that needed finishing.”

He said that he didn’t train specifically for the route, but he felt “significantly” stronger this time around. Megos also gives credit to luck for his
ascent: “…so much depends on how you grab the hold on the first hard move,” he told Planet Mountain.
“If you get it just right, then you can move slowly, almost statically to the next hold. And if the skin on your fingers is good, then you can carefully
control the long move from the undercling to the sloper.

“The intensity is enormous, and it’s all over in probably less than 30 seconds!”

Megos gave it around 10 attempts in 2014. This year, he redpointed on his fifth go.

“…the more I think about it, the more I realize I have no idea about the grade,” he told Planet Mountain.
“You know, so much depends on whether a route suits your style or not. A route that suits your style can feel easy, one that doesn’t can feel totally
impossible.

While in the U.K., Megos also climbed Steve McClure’s Northern Lights (9a/5.14d) in Kilnsey. He redpointed it on his eighth attempt after falling
from the crux seven times. McClure established the route in 2000 and Megos made the third known ascent, after Ondra’s repeat in 2010.

Megos nearly flashed Progress (8c+/5.14c) and True North (8c/5.14b), climbing both on his second go after he “totally messed up the flash,”
he posted on Instagram.

“I really have to say, those routes here at Kilnsey are world class routes,” he wrote. “There are not many places I’ve been to with such amazing routes!!!”