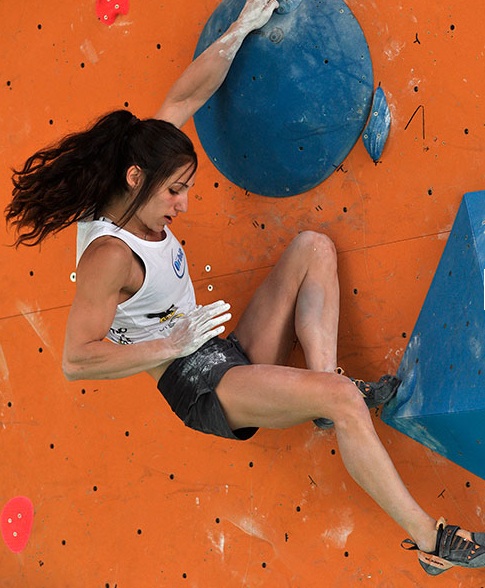 Alex Puccio’s decision to sit out the last two World Cups of the season to “reboot” and spend time climbing outdoors seems to have been a good one. Puccio took first place at the Arco Rock Master Bouldering Competition on August 31st for the third year running, fresh off a second place finish at the Bouldering World Championships on August 23rd.

Puccio was solid at Arco, hanging on just a second longer than Akiyo Noguchi of Japan in her last of three tries on the final problem. Noguchi took second with Julija Kruder from Slovenia taking third.

Kruder’s brother Jernej took first in the men’s division, followed by Jeremy Bonder from France and Makoto Yamauchi of Japan.

Earlier this summer, Puccio took a disappointing sixth-place at the Bouldering World Cup, her worst finish. She left the World Cup Circuit to climb outside, posting on her Facebook, “My brain, body and emotions were so depleted of psych and energy I made the decision to skip the last two World Cups this year and just go outside climbing. It was so nice to reboot and just feel free of everything for a change.”

During her brief hiatus from the competition scene, she has added 23 problems graded V10 and above to her 8a.nu scorecard. With multiple V13s and a V14 under her belt, Puccio then returned to her competition scene with a renewed focus.

“With my new outlook on myself and my climbing I feel more prepared for my future challenges,” posted Puccio on her Facebook, “if it’s a competition or another project outside I feel much better about it all.”