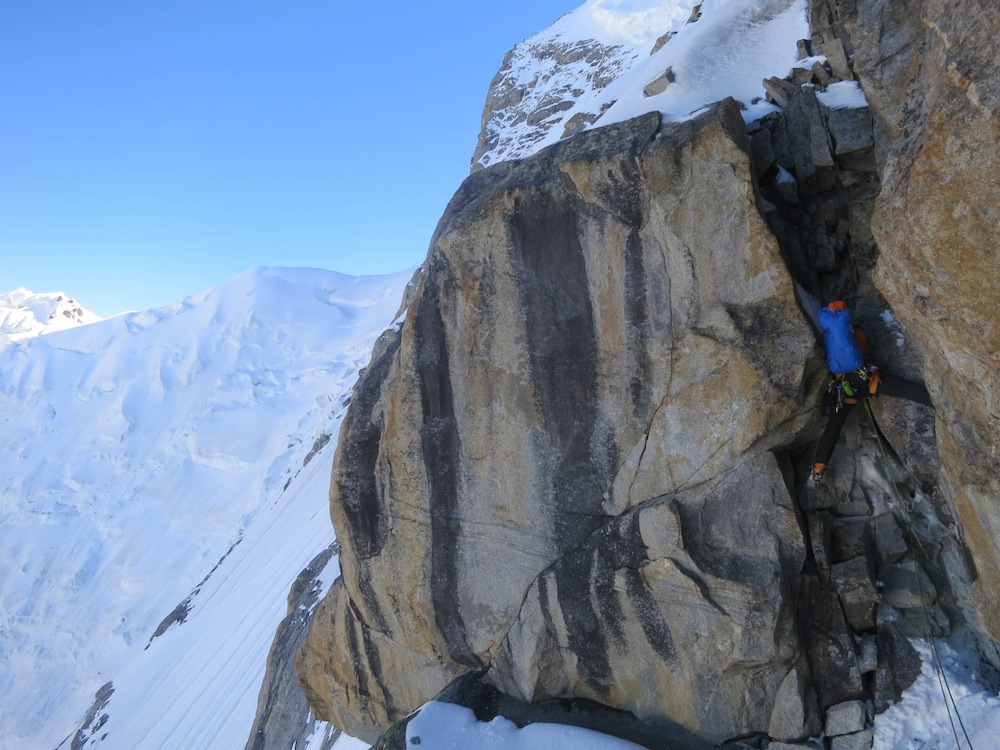 After a three-day push, Scott Bennett and Graham Zimmerman summited K6 West in Pakistan’s Karakoram on August 20th, having completed a new route up the mountain’s Southwest face. It was their second first ascent since arriving in the Nangmah Valley in July.

“I was nearly drunk from the altitude,” Bennett tells Rock and Ice. “We spent only two minutes there, snapping a few photos and hugging, before setting off.”

Bennett, 30, and Zimmerman, 29, had not planned on climbing K6 West this season. The two had long dreamed of a trip to the Karakoram, but had gotten shut down numerous times by permit problems – the bureaucratic red tape that comes with climbing in Pakistan.

They had all but given up hope. Then last year, Steve Swenson, 61, asked the young-guns on an expedition to climb the central pillar of the south face of K6 Central (7,100 meters), the only peak in the K6 massif that remained unclimbed. “[Graham and I] had specifically ruled out Pakistan, because of our difficulty in years past with the bureaucracy,” Bennett says. “But the chance to climb with someone so experienced, and so knowledgeable about Pakistan, forced us to change our minds.”

Swenson says that he wanted to introduce the two younger alpinists to his connections in Pakistan, gained over his many years of expedition climbing in the area—a passing of the torch. 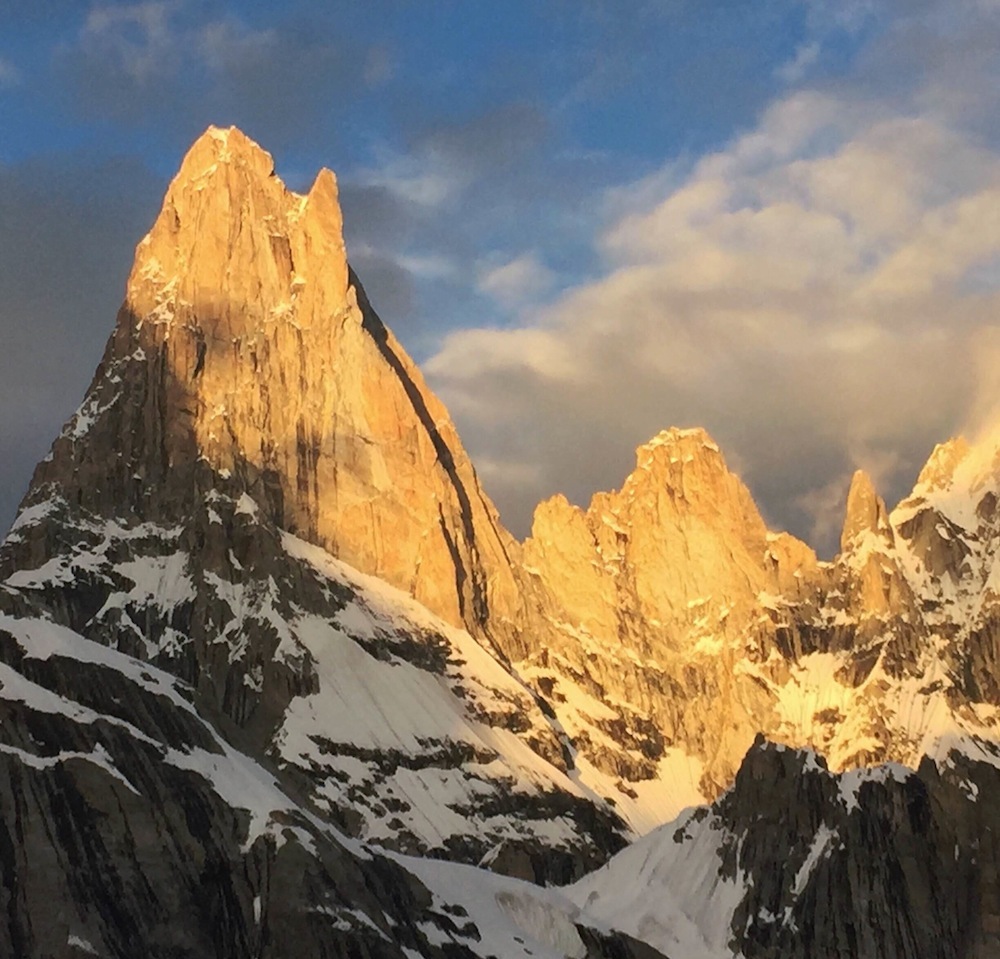 The trio arrived at base camp in Nangmah Valley on July 10 after several days of driving and two days of trekking. They spent most of that month acclimatizing and setting up an advanced basecamp on the far side of Hidden Col, using beta from a 1970 Austrian expedition that climbed the col on their first ascent of adjacent K6 Main’s southeast ridge and a 2010 Polish attempt on Changi Tower (6,500 meters).

“Changi Tower immediately appealed to us because it was a striking mountain, with apparently good granite, perfect for acclimatization,” says Bennett. “Changi also offered a North facing line, partially on rock, which would be more climbable in mid summer.” From advanced base camp they began establishing a route to the base of the unclimbed tower, via a complex icefall that initially took them two days to navigate. They cached gear and retreated to basecamp to wait for a weather window.

On August 8, after several weeks of poor weather, they went for Changi Tower via its North Ridge (M6, 5.10, A2). Day one saw snow, ice, and some mixed climbing. On the second day Bennett led a few more ice and mixed pitches before reaching a rock dihedral. Bennett short fixed every pitch of the dihedral—rope-soloing and fixing gear while the other two jugged the pitches behind him—and they reached the summit just before sunset.

They then turned their attention to K6 Central. Almost immediately upon arrival in Nangmah Valley, the group had noticed a system of seracs on the south face of K6 Central that had not been visible in any satellite images. “There hadn’t been any group discussion about whether the route was safe or not. Then we saw a giant serac collapse and avalanche next to our chosen line. That sealed the deal,” says Zimmerman. 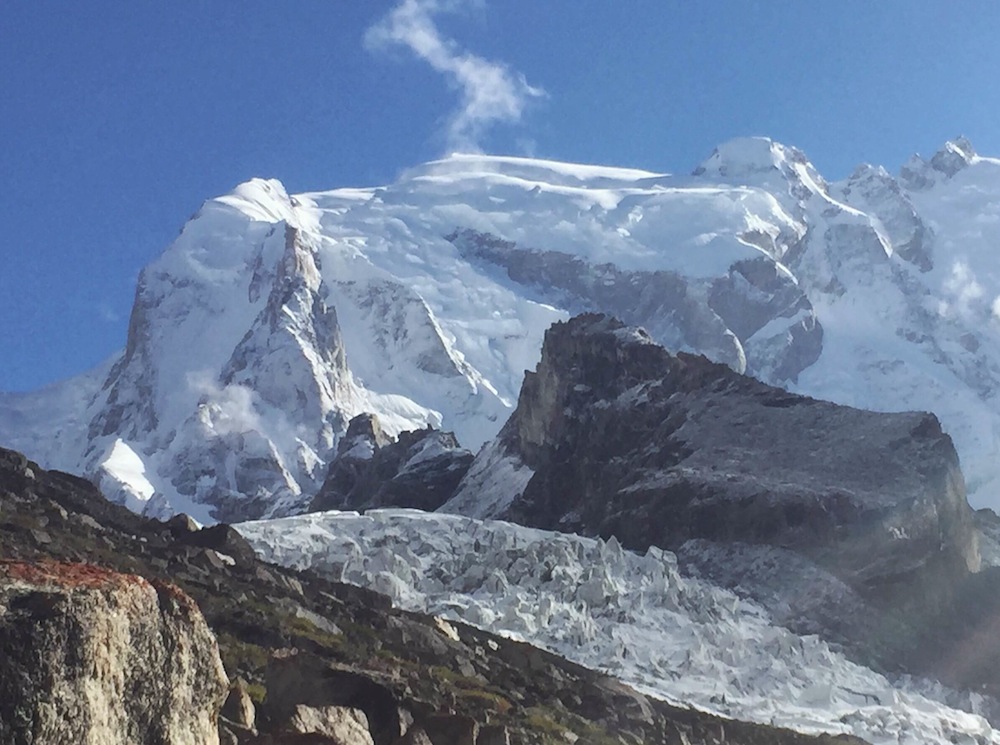 The team began scouting alternative climbs, and found their answer on the southwest ridge of K6 West (7,040 meters), which had been climbed once, in 2013, by Canadians Raphael Slawinski and Ian Welsted via the northwest face. Their ascent won the Piolets d’Or, alpine climbing’s highest achievement.

“You have to go into these exploratory alpine climbing trips ready to be flexible. Luckily, the southwest ridgeline was something we were immediately able to get excited about,” Zimmerman says. “ It was a stunning, logical line that had some question marks, which are always kind of exciting.” 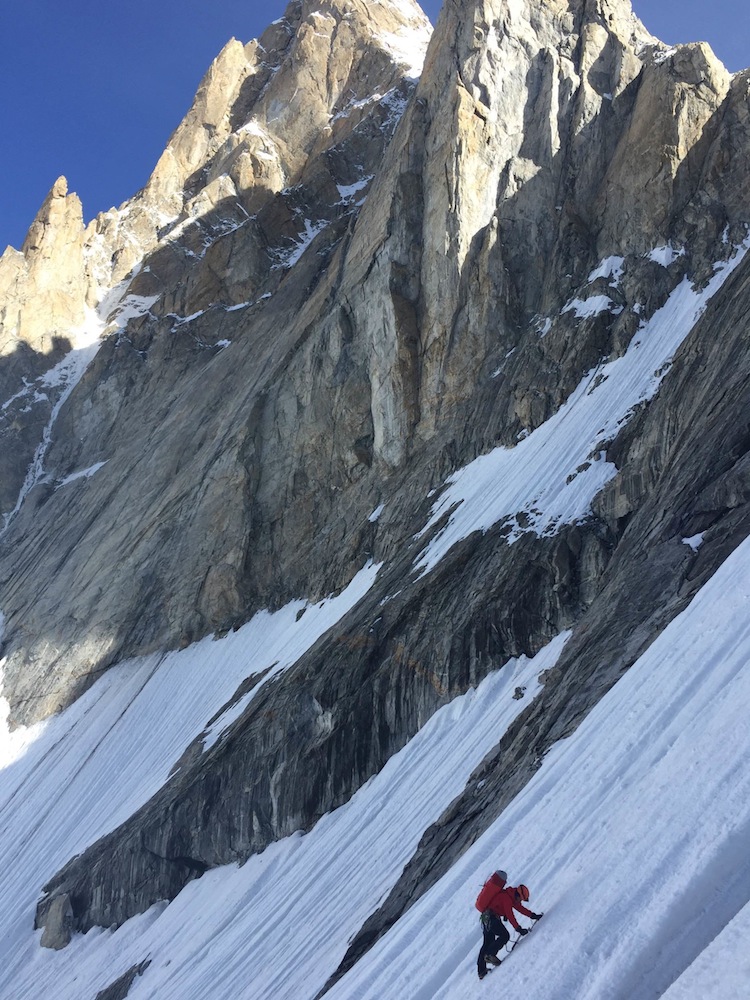 With an unsettlingly small weather window, Bennett and Zimmerman set out on August 18th for the Southwest ridge of K6 West. Swenson, who was not yet fully recovered from Changi Tower, stayed behind to ferry remaining gear from their Changi advanced basecamp back to basecamp. Zimmerman and Bennett ascended a snow slope to gain the ridge, where they made their first bivy. They woke at 2 a.m. to tackle the ridgeline, which ran into a pair of buttresses. The traverse along the west side of these buttresses on a combination of snow ledges and mixed climbing proved to be the crux of the route but, as Zimmerman notes “it was wonderful.” A big ice sheet lead to the top of the second buttresses, where the two found a comfortable bivy.

The next morning, they started before sunrise to slog the last 400 meters through heavy, consolidated snow. “We topped out around 1 p.m. and were treated to an amazing view of the Karakoram. I was blown away, seeing all the 8,000 meter peaks and on to the Pakistani border,” says Zimmerman.

Bennett and Zimmerman say they are grateful for Swenson’s mentorship and support. “Without Swenson’s help securing our exit from advanced base camp, it would have been a scramble to get the K6 West climb done and catch our flights home,” says Zimmerman. “Steve was really enabling in that regard.” Both Zimmerman and Bennett hope to return to the Karakoram, though, another shot at K6 Central is not on their radar.