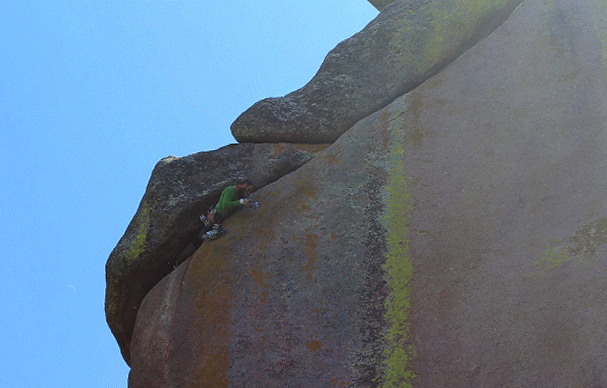 Bob Scarpelli—fearless Vedauwoo, Wyoming route pioneer—described Jihad as one of the scariest routes he had ever established. On the North Corner crag in Upper Blair, the 60-foot, overhanging offwidth remained unrepeated for 25 years after his 1988 first ascent. While the rest of Scarpelli’s legendary Vedauwoo offwidths were repeated one by one, Jihad was the last to fall—despite the 5.11d grade.

It took another offwidth aficionado, Pamela Shanti Pack, to claim the second ascent. “In a long career of climbing hard wide cracks, Jihad was one of the most fierce that I have encountered,” Pack wrote on The Mountain Blog.

“I fought back tears and swore at Scarpelli for crushing my ego and soul. The mystery of Jihad’s dormancy was unraveling.”

Undaunted by its reputation, Anthony Johnson decided to give Jihad a go this June and onsighted the route—its third known ascent.

“I had no expectations of getting the route clean,” Johnson told Rock and Ice. “Given my past experiences on Scarpelli routes, I knew getting on what he calls a ‘5.11d’ would mean I was in for it.”

Johnson describes Jihad as “the most awkward and contrived route” he has ever attempted. “The route is terrifying. The squeeze chimney at the start is horrendous and also extremely physical—my ribs where bruised for a solid week afterwards!

“In pretty much every section, I felt like I was going to peal out at any moment.”

By the time I was halfway up the route I started placing extra gear just get it out of my way and to lighten my harness. Even then, I still finished the climb with gear left on my waist.

Pack has jokingly referred to Jihad as a 5.13+ offwidth. “That statement was not meant to be taken literally,” Pack wrote on her blog, “rather I am paying my respects to Bob Scarpelli by intimating that the 11d grade may be a bit ah…misleading?”

In reference to the grade, Johnson says, “It’s really hard to say because the route is so unlike anything else I have ever climbed.”

Jihad requires every type of offwidth technique there is, as opposed to typical offwidths where the difficulty comes from repeating the same moves over and over.

“On Jihad you never seem to use the same move twice,” says Johnson. “Every section of the climb requires varying techniques.

“I not sure what I would rate the climb. I don’t think I have done enough of the modern 5.12s / 5.13s to really have a good feel for the grades, but I will say that, like most Scarpelli routes, adding a number or two probably wouldn’t be far off.”

Do people actually enjoy this offwidth torture? Johnson says, “I’m sure I don’t appear to be having any fun, however, I do enjoy the mental and physical challenge so I guess that’s why I keep coming back to them.”

Johnson hopes to have another crack at Belly Full of Bad Berries (5.13) in Indian Creek, Utah, later this fall. This past spring, he managed to work the route to the anchors, “but I think it is going to take a few attempts to get clean,” says Johnson.