And sorry I could not travel both

And be one traveler, long I stood

And looked down one as far as I could

To where it bent in the undergrowth.

—“The Road Not Taken” by Robert Frost

Unable to move the frying pan to the dinner table, Bernd Zangerl, Austrian V15 boulder slayer and one of the strongest climbers alive, was indeed at Robert Frost’s proverbial “two roads.” His body: weak, physically broken, a spinal injury shooting bytes of pain up and down his limbs. His mind: confidently despondent, cautiously optimistic, progressively unsure of what life had in store for him.

Zangerl was familiar with what Frost called the worn path—that was the path he had taken as a professional climber. That path jumped into the fast lane after his 2001 repeat of Fred Nicole’s Dreamtime, the world’s first V15, then came to a screeching halt when he broke his neck in a fall. The path he looks down in “Into the Sun,” page 56, is the one he never wanted.

“My life as a professional climber isn’t really optimistic at this moment,” Zangerl said to his young brother Alexander, who was in town visiting him after the accident. Zangerl was so weakened by nerve damage that he was unable to lift a frying pan. Zangerl resisted a different path, just as we all would. Life otherwise is hard to imagine. 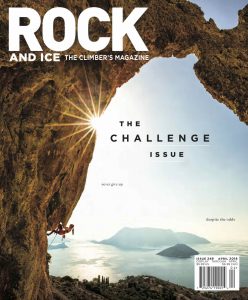 In your hands you hold our debut “Challenge Issue,” a collection of stories of climbers who rose to the occasion. Before challenge meant (as a noun, and for climbers) something to seek, a thing to cut your teeth on, in the 14th century a challenge was a “malicious charge,” or “false accusation.” You could have a challenge put to you, and you’d have to defend yourself against it. Tragedy is a challenge in the classical sense—especially life-altering injury—and can make us feel like victims, as if the world is against us. We feel accused, the accusations born from our blindness—the fact that we put too much importance on one thing. Often, we get angry. Our imagination fails us.

Zangerl’s story—how he deals with the injury as a “gift,” how he avoids anger, how he explores all means for recovery, perhaps inventing some of his own—reminds us of what challenges are: opportunities. For self-discovery, enrichment, living otherwise. But, as Frost reminds us, the path is hard to follow, and often you need to make a new one, right through the center line…which is what climbing is about, right?

Making a new path is precisely what Thomas Huber, Stephan Siegrist and Julian Zanker do on a Himalayan first ascent on the bomber granite of India’s Cerro Kishtwar (page 46). Michael Pang’s story, one of the few doctor-crushers in the climbing world (“The Dirtbag Doctor,” page 30) is about the challenge of the climb/work balance. Pang seems to have it all—meaningful work, lots of time to climb, great friends to travel with. But it’s more complicated than that, and, if anything, it forces us to rethink how we spend our own time, and what we prioritize.