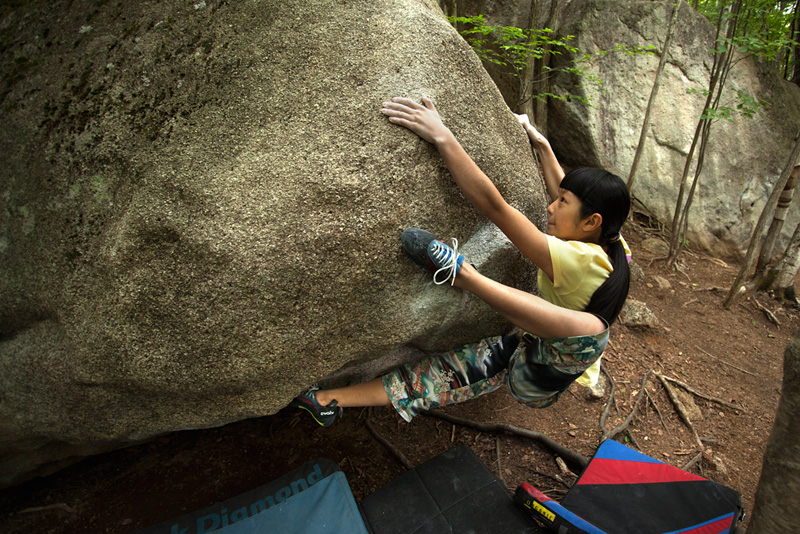 Eddie Gianelloni how you end up when you eat chocolate 24/7,” said Ashima Shiraishi on Instagram after she made the first female ascent of 24 Karats (5.14c) in the Red River Gorge, Kentucky, last week.

The route, originally sent by Jonathan Siegrist, is a modern Red River Gorge testpiece that ascends the immaculate Gold Coast wall on tiny crimps up an overhanging face.

First established in 2010, 24 Karats starts on the first half of an undone Gold Coast project before veering left and ending at the chains to the right of God’s Own Stone (5.14a). Siegrist describes the route on his blog:

“This route is hard throughout, but a very difficult boulder problem guards the bottom third- a delicate deadpoint to a complete non-hold sloping crimp, immediately followed by a second deadpoint to a pad and a half clipping hold (quite good for this particular climb) … it’s savage and brilliant,” he wrote.

The ascent of 24 Karats was of course not the only notable ascent for Shiraishi during her trip. The day after 24 Karats, she climbed 50 Words for Pump, also 5.14c, located at the Bob Marley crag. The route follows 11 bolts through a V11 boulder problem up to an incredibly steep and pumpy overhang to the chains.

With these two ascents under her belt, the twelve year old is now the only female to have climbed both V13 and 5.14c, according to 8a.nu. Her recent ascents at Red River Gorge mark her 3rd and 4th ascents of 5.14c’s, respectively. Click here for a Rock and Ice interview with Shiraishi from earlier this year.

Below is a video of Jonathan Siegrist on the first ascent of 24 Karats (5.14c).