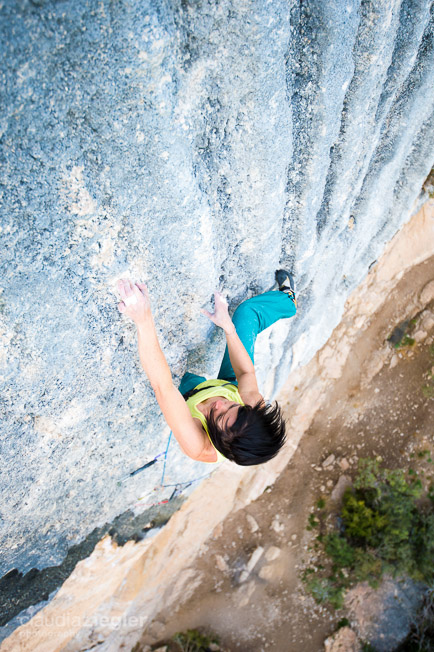 Claudia Ziegler” />Barbara Raudner of Austria has climbed her hardest route to date, sending Mind Control (5.14c) at the now renowned crag of Oliana, Spain. The 150-foot tufa route, which was established by Chris Sharma, has become a modern classic for the sport-climbing elite. Raudner says she was inspired to try the route after Daila Ojeda made the first female ascent in 2012. “Daila recommended the route to me,” writes Raudner. Raudner began projecting the line immediately, and her progress was quick.

“In February, the day, when Adam Ondra sent La Dura Dura 9b+ (5.15c) and Andrea Cartas did Fish Eye 8c (5.14b), I was already super close to sending,” says Raudner. “I fell again a few times on the last moves before I had to go home.”

Raudner returned to Spain in March, however, and set her sights on Mind Control. But the wet spring in Spain tested her patience. “The top tufa was very wet and it stayed wet for long time.”

Undaunted, Raudner continued to work Mind Control, explaining that she was too “infatuated” to give up. By late April the top tufa of Mind Control finally dried, and Raudner’s patience paid off.

“I had to stay motivated, control my mind until the top, and take my chance,” she says. Raudner stayed focused and clipped the chains of Mind Control (5.14c), which she says is the “most beautiful route” she has ever tried.