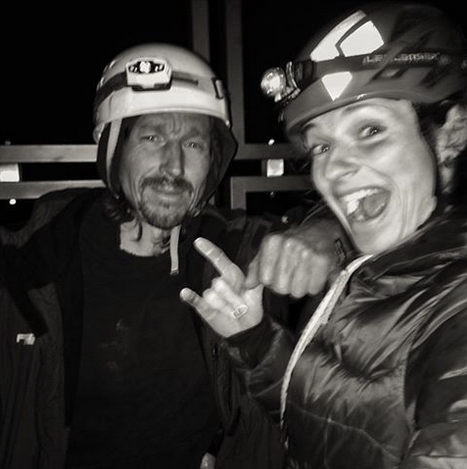 At 2 a.m. on June 6 Barbara Zangerl’s headlamp shone on the summit of Bellivista, a 10-pitch 5.14a in Italy’s Dolomites. She had been climbing since 9:30 a.m. the day before, and had spent the last few dark hours searching the cliff for the few pitons that protected the upper pitches. Now, 500 meters above her starting point, the Austrian climber became the second female to stand on the summit.

“I didn’t really think that this would be the sending day,” Zangerl told Rock and Ice. “I climbed a lot the day before, so I felt a little bit tired.”

Zangerl had attempted a ground-up ascent twice before, unsuccessfully. She also spent several sessions last summer dialing in single pitches and working the often wet roof-crux of pitch seven with Italian climber Jacopo Larcher, who was trying Panaroma (5.14b, 500m), a variation that splits from the roof of Bellivista.

“I led all the pitches to the roof, and I felt in a good mental shape,” said Zangerl. “I was super nervous before my first try on this pitch. I started climbing and everything went perfectly; I climbed through the first crux and reached the first rest, then the pumpy part started. It was a real fight through the 40-meter traverse. I was so happy to clip the belay.”

“Before Bellavista I did a lot of multi-pitch routes, but more alpine ‘sport climbing’ multi-pitch with bolts,” Zangerl explained. “Bellavista is protected with old pitons, only the belays are bolted. [Bellavista] offered me a big challenge, not only physically but also mentally.”

Zangerl has no specific plans for the remainder of the summer, but she is planning a trip to Yosemite with Larcher this fall.

“Multi-pitch routes like [Bellavista] inspire me to keep on trying routes like this. But I like to combine different styles of climbing the most. I also really enjoy going sport climbing or trad climbing or sometimes bouldering. This is what keeps my motivation high for climbing all the time; you can switch when you get bored with one style.”

Zangerl was the first female to boulder V13, Pura Vida in Magic Wood, and has claimed the first female ascents of E9/10 trad route Prinzip Hoffnung (5.13d) in Vorarlberg, Germany, and the Alpine Trilogy, three 5.14a multi-pitch routes in the Alps—Kaisers neue Kleider, Silbergeier and End of Silence.