“A line of a lifetime,” Stas Beskin says of his new ice line on a remote face near the Sainte Marguerite River in Quebec, Canada. And it’s easy to see why: the climb, which Beskin established with his partner Daniel Martian, is beautifully intimidating, wildly dangerous, long, exposed, and wholly unique.

The 180-meter Routes des Baleines consists of four pitches, the easiest ice coming in at WI 6, the hardest at WI 7-, and a healthy helping of M7 and M9 climbing in between. What makes the route so special, Beskin says, is its diversity of features and that neither he nor Martian “have ever climbed anything like this before.” In those four ropelengths they encountered verglas, daggers, blobs, mushrooms, jellyfish, daggers, overhangs, chimneys and offwidths. “Just name it,” Beskin says, “it has it all.”

They duo came tantalizingly close to realizing their dream line last year. They started up the route only to retreat when the cliff face above them starting sloughing off it’s torpedo-shaped icicles.  The combination of the sunny southeast exposure and late season warmth sent them packing empty handed.

The unclimbed line stayed on their minds all spring, summer and fall, so Beskin and Martian returned for redemption this winter. This time, they climbed a previously established climb, Le Mulot,  just to the left of their prospective line so that they could rap down, drill any bolts that might be necessary, and dislodge any free-hanging ice that would otherwise be likely to come down on them anyway.

The next day they started climbing from the base. While the first pitch went reasonably well, the second pitch proved more problematic. They spent the day working it with their drooped and aggressive Krunogi ice picks, and returned to the ground for one more effort the next day.

Finally, on the third day, they took it to the top and christened their climb Routes des Baleines (WI 7- M9). The climb’s objective dangers will deter most future ascentionists, but for any intrepid suitors, below are descriptions of each pitch, provided by Beskin.

Start 20 meters to the right of Le Mulot with thinly iced left facing corner capped by a little roof; mount a free hanging dagger and climb some ice to the base of the second dagger. 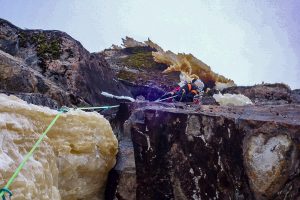 Start from the little cave on the right side of the ice pillar, climb the pillar, go into “Bomb bay” chimney, attack the burly offwidth, climb a thin seam and then finish on ice blobs in the big cave with anchors. Bolted but bring some big and small gear to soothe the runouts. 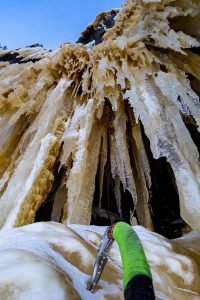 Climb left from the cave all the way up to the top.

Objective dangers: remote area; sink holes along the approach; a lot of free hanging ice plus southeast exposure (not recommended in warm temperatures).