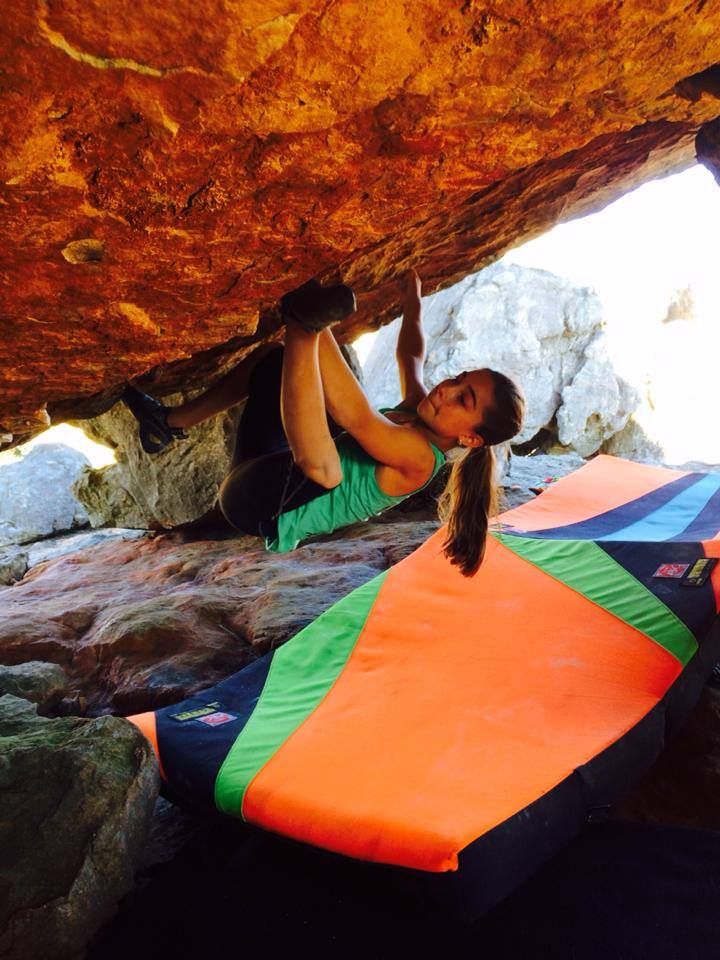 Fragile Steps is a steep, powerful and technical route, crossing a roof that requires strong fingers, body tension and is “good for short people,” according to Brooke.

This was the third female ascent of the problem, with Brooke’s ascent being preceded by Doro Karalus in 2010 and Ashima Shiraishi in 2012.

You could say that climbing hard runs in Brooke’s family. Her mother, Robyn Erbesfield-Raboutou, won four lead World Cups in the 1990s and is a founder of the kid’s program ABC Kids Climbing. Her father, Didier Raboutou, was also a preeminent French climber in the 1980s and 1990s, sending the world’s hardest sport climbs of the era and winning several lead World Cups.

Erbesfield-Raboutou, 51, has been sending many V10s on the family trip, while Brooke’s brother Shawn, 16, is working on Golden Shadow (V14) and two V13s, The Vice and Ray of Light while in South Africa.

Brooke thanks Shawn for the motivation to send her first V13.

“My brother helped me because at first when I tried it I wasn’t very interested in it, and he helped me find solutions and convinced me to keep trying,” Brooke wrote in an e-mail to

Rock and Ice. “He also was very encouraging, and it was nice to have him there to climb the boulder with me!”

The Raboutou family plans to stay in South Africa until late July and are accompanied by Mirko Caballero who recently flashed his first V11 while in Rocklands.

Alex Puccio, Brooke’s new coach and one of her favorite climbers, has also sent her first V13, Top Notch in Chaos Canyon, RMNP, Colorado, on Tuesday, July 1. After wrapping up her competition season in Vail a few weeks ago, Puccio made quick work of this V13 and many V12 problems, completing
Top Notch on her second day of attempts.

Check out the video below of Puccio coming close to sending Top Notch on an earlier attempt.