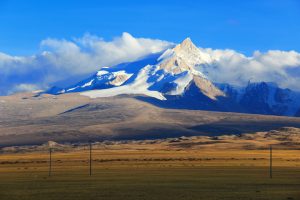 [UPDATE, 5/14/18] Petrov’s wife Radoslava Nenova announced via Facebook  from the likely conclusion of the search and rescue efforts(translated from Bulgarian by Facebook):

“Yesterday in a very difficult conversation I made a decision not to climb the top today. From Camp 3 up, we won’t find him alive. As much as I would like not to lose hope – for me, the life and survival of all the participants in the rescue action is very important, and although it is very difficult for me – I see no point in being threatened or other lives. So, I prefer the rescue teams to search the areas where there’s a chance to find bojan alive…

If for bojan the battle is over, let him stay in the mountains. Whatever happens by the end of the day, I am grateful for all my efforts and reward them. This is the life of the sherpas, I know that when they come down, they’ll take another risk, on another slope, for another climb…, but personally, I don’t want to risk it. All the search decisions from here are theirs.

Due to the great flow of information and comments that hovers, I have decided to describe a very detailed timeline, facts, correspondence and prices. I haven’t decided whether to do it in a post or a book. One thing’s for sure we wrote a story and she deserves to be remembered. Because of bojan!”

On April 29 Bulgarian high-altitude alpinist Boyan Petrov separated from his expedition team to make a solo summit attempt on Shishapangma, the 14th highest peak in the world at 8,027 meters. Petrov remained at Camp 3, at about 7,400 meters, after the rest of his expedition team decided to return to a lower camp as conditions began to deteriorate. Petrov was last seen via telescope at Camp 3 on May 3.

Two days later, on May 5, a Ukrainian mountaineer and three Sherpas reached Camp 3 and found Petrov’s partly open tent and his sleeping bag covered in snow, suggesting that Petrov had left for the summit several days prior.

Petrov, who works as a zoologist specializing in cave wildlife at the National Museum of Natural History in Sofia, Bulgaria, is widely considered to be Bulgaria’s most successful high-altitude alpinist and has made numerous solo summits of peaks above 5,000 meters. He has also summited 10 peaks over 8,000 meters without bottled oxygen and planned to attempt Everest after Shishapangma, which was to be his eleventh eight-thousander.

Despite Petrov’s extensive experience in the mountains there is additional concern as he is diabetic, a condition he developed after receiving chemotherapy treatment for cancer 18 years ago. As a result of his medical condition Petrov suffered serious episodes of ill health both on K2 in 2014 and Annapurna in 2016.

Currently, a rescue team of three Sherpas and three Chinese climbers and a high-altitude helicopter are searching the slopes of the mountain, and have reached up to Camp 2 at 6,700 meters, while Petrov’s family, friends—including his expedition teammates—and the Bulgarian Government work with Tibetan and Chinese officials to further facilitate the search.

Nanga Parbat: Rescuers Save Revol, Could Not Help Mackiewicz