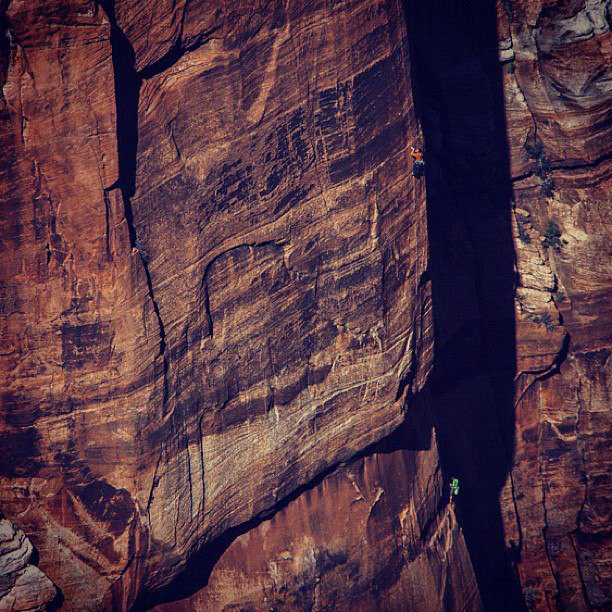 In a mere 16 hours, Tommy Caldwell and Alex Honnold have free climbed four Zion big-walls in a single push. The formidable duo romped up Sheer Lunacy, Moonlight Buttress, Touchstone Wall and Spaceshot for a groundbreaking day of free-climbing.

“All free in 16 hours with Mr. Honnold,” wrote Caldwell on Facebook. “What a great day.”

Caldwell and Honnold’s massive day of Zion free climbing checks in with approximately 35 pitches of sustained sandstone pulling, with the crux of the entire day being the 5.13b pitches of both the Touchstone Wall and Sheer Lunacy. Each route, however, demanded some strenuous climbing. The day’s “warm-up” — Sheer Lunacy — involves roughly 1,000 feet of climbing with a crux pitch of 5.13b, which Honnold describes as “maybe the hardest pitch of the day.” Their next route, Moonlight Buttress, was the pair’s “most moderate” route according to Honnold and includes around 1000 feet of sustained desert-style crack climbing, with pitches 5 through 10 all being graded 5.12, and the crux (6th pitch) going at 5.12d — though Honnold suggests that it’s more likely 5.12c “all buffed out and chalky.” It’s also worth noting that Honnold free-soloed Moonlight Buttress in 2008.

After Moonlight Buttress, Honnold and Caldwell cruised up the 900-foot Touchstone Wall, which is less sustained but holds a solid 5.13b second pitch. Finally, Caldwell and Honnold finished with a jaunt up Spaceshot, which is an 8-pitch, 800-foot big-wall tour that involves some moderate climbing but still has two 5.12 pitches and a 5.11+ offwidth pitch. “It was pretty tough in the dark,” says Honnold. In case you’re keeping track, the duo’s extraordinary day ended after approximately 3,700 feet of free climbing.

According to Caldwell via his Facebook page, the day “left his fingers pretty swollen.” But this is not the first time Honnold and Caldwell have teamed up for a big-wall extravaganza that leaves them tired and everyone else’s jaws dropped. In May of 2012, the pair teamed up for a blazing link-up of Yosemite’s El Capitan, Half Dome, and Mount Watkins, which they completed in roughly 21 hours. Though their Yosemite link-up took about five hours longer than their Zion excursion, the total feet of free climbing during their Yosemite link-up comes to about 7,500-feet of vertical granite.