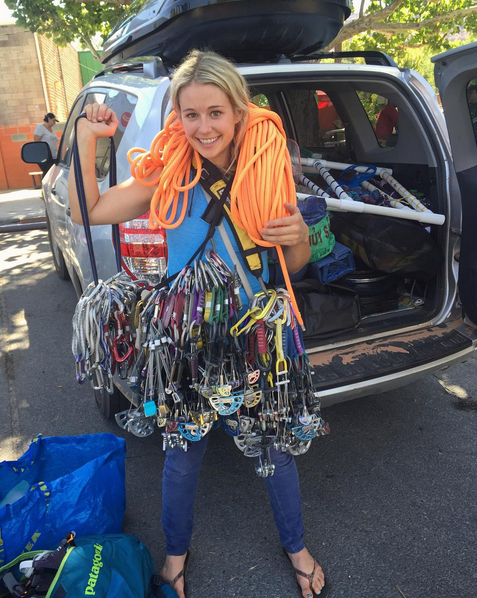 Caroline Gleich, 30, is a world-famous ski mountaineer recognized
for fast-and-light alpine ascents/descents on King’s Peak, Orizaba and Aiguille du Chardonnet. Although she’s less known in the rock climbing community,
she can hold her own. Before she earned fame as a skier, it was granite rock climbing that pulled her to the mountains.

Caroline grew up in Rochester, Minnesota, on northern edge of the plains. When she was 10, her family hiked Fremont Peak (13,745 feet), a ragged stand-alone
summit in western Wyoming’s Wind River Range. “From then on I wanted to do anything at all in the mountains,” Gleich said.

At 16, Gleich accompanied her uncle, an “old-school” climber, on several classic trad routes up the quartz monzonite splitters of Utah’s Little Cottonwood
Canyon, east of Salt Lake City. She fell in love with climbing after doing the ultra-classic crack Satan’s Corner (5.8) at night. But after
a climbing partner suffered a broken pelvis and another shattered his wrist and feet, Gleich focused on big-mountain skiing instead. “I didn’t have
the rope skills yet to climb solo, and pow is soft,” she said, laughing.

After a few years of skiing, Gleich began pushing higher into the mountains, scaling a few alpine peaks each year to carve couloirs. At 18, she decided
to focus on becoming pro and started learning technical mountaineering skills and avalanche safety. It took her the better part of 10 years to feel
confident, but during that time she hauled herself up Mt. Hood, Mt. Shasta and massifs in British Columbia’s backcountry. 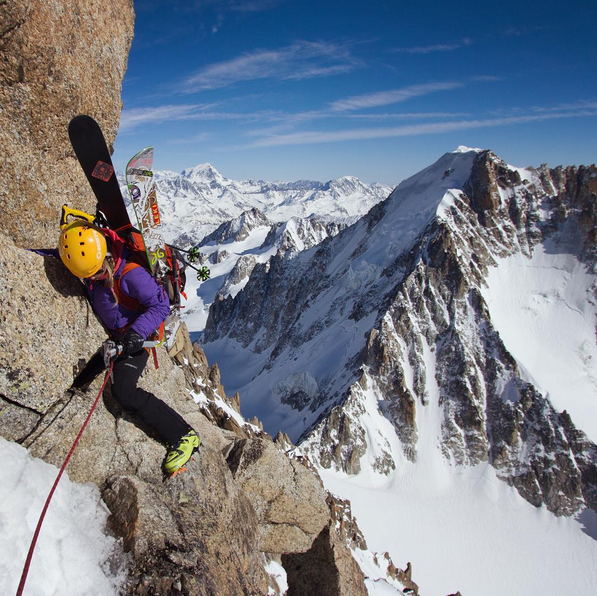 Gleich nabbed covers with Backcountry, Ski and Powder, but it wasn’t until she met Liz Daley, an AMGA guide and split-board
mountaineer, on a 2011 trip to Chile that she began to rock climb again. For three years they traveled around the world for ski trips. “Liz was like
my sister and the one who made me take the sharp end of the rope. She was the one who told me I needed to ice climb and get back into rock climbing,”
Gleich said.

In 2013, Gleich windmilled up the 600-foot Great While Icicle (WI3) in Little Cottonwood Canyon with a friend and climbed the 600-foot Whorehouse Hoses (WI4-5)
in Ouray.

It turned out to be her golden year. Gleich summited and skied the three highest peaks in Ecuador—Cayambe, Cotopaxi and Chimborazo—in one week;
traveled to Chamonix, France, where she climbed the five-pitch Vent du Dragon (M5) and ski mountaineered 10 lines on Aiguille d’Argentiere,
Aiguille du Chardonnet, Aiguille du Midi, Dent du Géant and other peaks; plus bagged multiple ascents/descents in the Tetons and Wasatch. 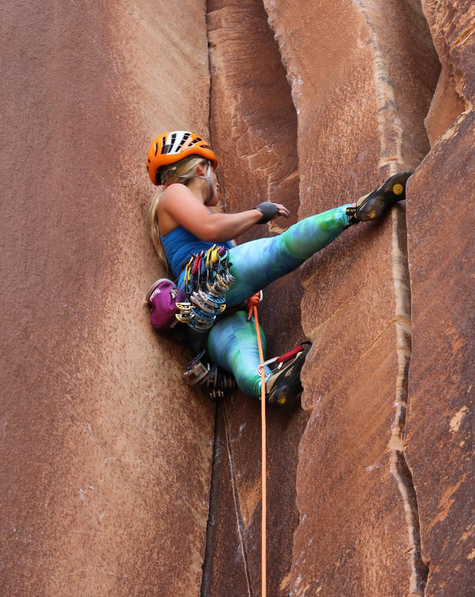 In the summer of 2014, Gleich did a tour of desert sandstone-splitters in Utah and Colorado during which she climbed eight towers including the Stolen Chimney (5.10) in the Fisher Towers and North Chimney (5.9) on Castleton Tower.

In September 2014, an avalanche killed Liz Daley while she descended Cerro
Vespignani in Argentina. “Losing her was the hardest thing. I’m still healing from that,” Gleich said. “It made me question my goals and changed how
I evaluate risk.” On the same day of Daley’s death, Gleich’s heroes, the ski mountaineers Andreas Fransson and J.P. Auclair,
were killed on Monte San Lorenzo in Chilean Patagonia. Still, in the spring of 2015 Gleich ascended/descended Utah’s King’s Peak in one day and finished
three 18,000-foot mountains in Peru; Ishinca, Ursus Este and Pisco.

Last fall, Caroline returned to Indian Creek in remembrance of Daley. “My time in the Creek was for Liz,” Gleich said, “she loved it and she had a huge
impact on my life.”

On Halloween, Caroline was leading Bushwhack Crack (5.8) in Little Cottonwood Canyon when she broke a sesamoid bone in her left foot. But, Gleich
had projects to continue, and later ticked off 25 or so ascents/descents on the Chuting Gallery in the Wasatch Range, including the Dresden Face, Hypothermic
Needle, Hellgate Couloir and Powerhouse Couloir.

Caroline is currently climbing in the Bugaboos of British Columbia to get in shape for the upcoming ski mountaineering season.

What are your favorite types of climbs?

I’m kind of like a crotchety old man about my climbing. I want to climb granite, not slab, and I like old-school style trad climbs. I love sandstone and
quartzite also, but granite is what made me fall in love with ski mountaineering.

So Lynn Hill is your climbing idol?

She’s just the ultimate badass. She achieved things that stand on their own as contributions to climbing history—they weren’t just considered achievements
because she’s a petite woman and sent! She infiltrated the “boys’ club” and went about proving herself in a quiet way. 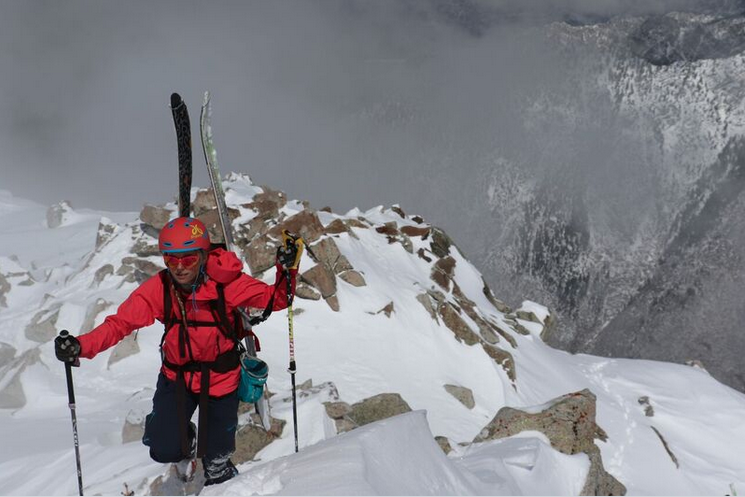 How much does your trad climbing carry over into ski mountaineering?

It’s great training. If you can do all of the rope skills to climb desert splitter cracks and towers, it helps with mountaineering. Climbing also totally
helps with managing fear and unexpected challenges.

How do you manage your fear while ski mountaineering?

What about managing fear when you’re trad climbing?

I’m not as good at that; I pretty much just grunt my way through! I was climbing with Kitty Calhoun and she told me to work on my footwork. She said, “A
weighted foot never slips.” When I’m scared I on a climb I repeat it to myself. Sometimes it’s good to just concentrate about the move after the scary one; if I think too much about the hard move I’ll fall more.

Do you think you’ll get into high altitude mountaineering?

I for sure want to go ski mountaineering in the Himalaya. Just not sure how high I want to climb yet… still deciding whether or not I want to do an 8,000-meter
peak. 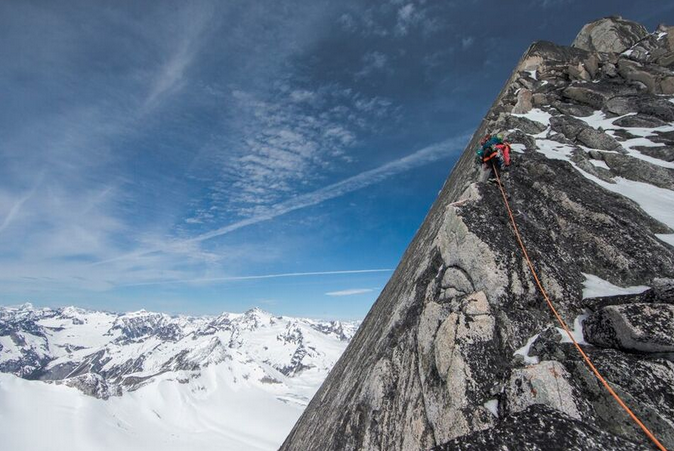 Is it hard to be a prominent female athlete in the ski mountaineering world?

Ski mountaineering is about as male dominated as they come—it’s incredibly intimidating to get into it as a woman. In Chamonix and other places,
when I said, “I’m going to go climb that mountain,” everyone was like, “You’re going to die!” A lot of people look and me and think that because I’m
so petite I’m incapable, and that’s the culture of a lot of outdoor sports, not just ski mountaineering.

Do you feel like you have something to prove, because it’s male dominated?

I try not to think about it that way, but absolutely. Liz was my biggest inspiration, and she was very feminine. She taught me it’s ok to be both a feminine
woman and a ski mountaineer. What bothers me is that sometimes people try and group all women together and ask me to speak for half the population
of the world. There’s just so many different style of women in the backcountry.

Are there any rock climbers you really admire right now?

I follow Emily Harrington and Sasha DiGiulian; also Kitty Calhoun and Majka Burhardt. Ines Papert is the most badass mixed climber. Mayan Smith-Gobat and
Libby Sauter’s speed record on The Nose really inspired me, and Jewell Lund and Chantel Astorga’s [all female first ascent] on the Denali Diamond last
year did too.

I’m planning [an expedition] for the fall… TBD. Maybe in the Himalaya, maybe New Zealand.