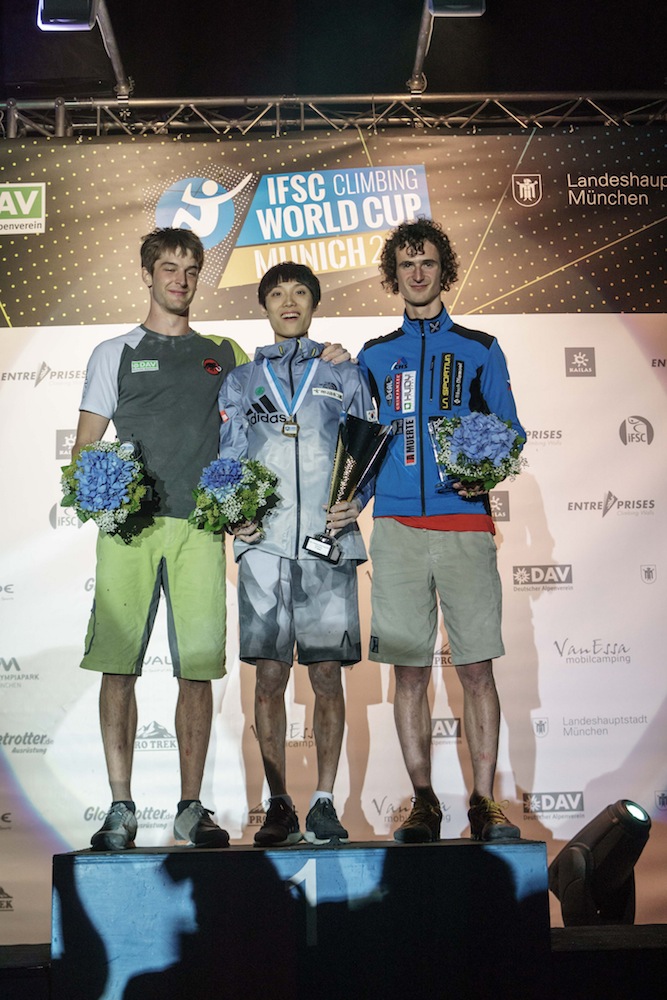 From the first competition of the year in Toronto, Canada to the last in Munich, Germany, the 2015 IFSC Bouldering World Cup season was a whirlwind—five comps in four different countries in six months.

This season saw first-time podium finishers standing next to the best, heart-breaking injuries, and a few surprises. But when all is said and done, only one man and one woman can be crowned the overall 2015 World Cup Bouldering Champion.

This year Jongwon Chon of Korea claimed that title for men with a total of 292 World Cup points, despite missing the Vail, Colorado competition. In second, Jan Hojer of Germany finished strong with 264 points, and not far behind, Adam Ondra—the 2014 Bouldering and Lead champion—with 259 points.

Out of nowhere, young-gun Nathaniel Coleman from Murray, Utah, fresh out of high-school, landed fourth in the overall ranking in his first ever World Cup season. Coleman competed in all five competitions, taking second place in both Toronto, Canada and Vail, Colorado.

On the women’s side, leading the pack with 395 points, Akiyo Noguchi of Japan claimed the overall 2015 Bouldering Champion title. Great Britain’s Shauna Coxsey, after a flawless performance in Munich on Saturday, took second with 332 points, and Miho Nonaka of Japan, third, with 276 points.

Megan Mascarenas, another American new to the World Cup scene, finished in an impressive fifth place. In front of her home crowd, the 17-year-old from Colorado took gold in Vail, topping competition veterans Noguchi (second place) and Coxsey (third).

The 2015 World Cup bouldering season might be over, but lead climbing is still underway. The next IFSC World Cup competition will take place in Stavanger, Norway this weekend, August 21-22. Check back for live streaming of the events.